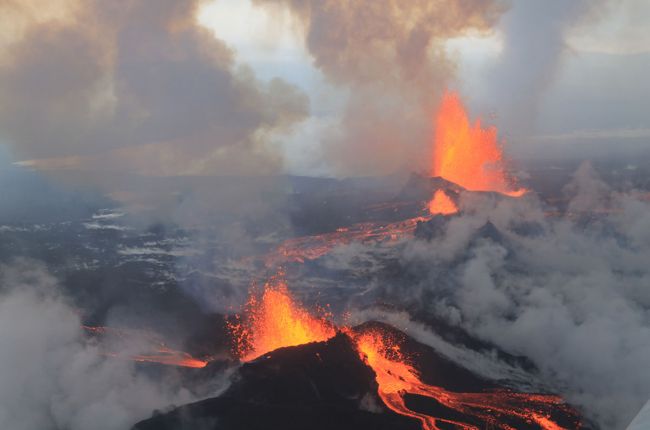 There are many different kinds of hazards associated with volcanic eruptions, depending on the type of volcano and eruption. Some volcanoes typically produce highly explosive eruptions, such as in the subduction zones of Alaska and the Pacific northwest, and others produce  less energetic eruptions, such as in Hawaii. Therefore, hazards detailed below are not necessarily relevant to every volcano. There are 169 active volcanoes in the U.S., chiefly in Alaska, California, Hawaii, Oregon, and Washington. All U.S. volcanoes are monitored closely by the U.S. Geological Survey and state geological surveys.

Lava flows are what they sound like: lava (molten rock) flowing directly from a volcanic vent or fissure. Many lava flows are slow and rugged, looking like a moving pile of rocks. Others are faster-moving and may look almost like rivers of flowing honey. Some volcanoes produce both. Deaths and injuries from lava flows are not common because flows are typically quite slow (walking-running pace or slower). However, the high temperatures of lava flows may cause fires, and anything in the path of the lava flow will become encased in a thick layer of rock. The ongoing eruptions at Kilauea, Hawaii are a well-known example of a lava flow.

Pyroclastic flows are a mixture of ash, volcanic gas, rocks, and lava that generally reaches temperatures of 390-1300°F (200-700 °C). These flows are mainly associated with volcanoes that have explosive eruptions, and they move down the volcanic slope at speeds greater than 50 miles per hour (80 kilometers per hour). The flows generally travel three to ten miles (five to fifteen kilometers) from the volcano. A pyroclastic flow will destroy almost everything in its path, cause fires and floods, and bury everything under a mixture of rock, ash, and accumulated debris. Serious injuries and deaths are often associated with pyroclastic flows due to their high speeds and destructive effects. Some notable examples of recent pyroclastic flows are the eruptions at El Chicón, Mexico (1982) and Mount Pinatubo, Philippines (1991).

Debris flows on volcanoes are a mixture of rock, ash, soil, vegetation, and water that flow down the slope of a volcano, sometimes funneling into river valleys. They can occur either during an eruption or at other times in response to high rainfall events. Lahars are a type of fast-moving volcanic debris flow consisting mostly of water, ash, and rock fragments with the speed of a fast-moving river but the consistency of cement. Lahars are mainly associated with steep-sided volcanoes and they can vary in their size and speed. The size of the lahar usually increases as it travels down the slope and picks up more debris. Lahars can do serious damage to river valleys and flood plains, and can bury entire villages, as occurred during the 1985 eruption of Nevado del Ruiz, Colombia. Lahars can travel along river valleys for much greater distances than lava and pyroclastic flows, presenting unique risks for communities in these areas. Past lahars at Mount St. Helens, Washington, have travelled up to 60 miles away from the volcano.

Landslides are masses of rock and soil that slide rapidly due to gravity. In contrast with a lahar, a landslide involves failure of the slope of the volcano itself. Landslides can be caused by earthquakes or high rainfall, but volcanic activities such as magma intrusions and volcanic gas explosions can also be triggers. Large landslides caused by eruptions can create dams that block rivers and bury roads, bridges, and homes. Underwater and coastal landslides can also trigger tsunamis. The eruption of Mount St. Helens, Washington, in 1980 was triggered by a landslide.

Tephra and ash are composed of varying sizes of rock particles ejected into the air from volcanic eruptions. Tephra refers to larger rock fragments (from pebbles up to the size of a car or house) that typically land close to the volcano, while ash is made up of small particles (sand size or smaller). Ash clouds can travel hundreds of miles from an eruption site and cover the land and sea surface in a blanket of ash. This ash blanket has serious economic effects because the tiny ash particles can ruin machinery, contaminate water, damage power supplies, cause severe damage to agricultural sites, and endanger aviation. Volcanic ash is not like ash from a fire: it is made up of tiny pieces of rock and volcanic glass. This poses a serious health hazard because inhalation of volcanic ash can lead to major respiratory problems. Recent eruptions in Iceland and Indonesia have generated large ash clouds that disrupted nearby air traffic.

Volcanic gases start out dissolved in magma and are released as the magma rises towards the Earth’s surface. These gases include sulfur dioxide, carbon dioxide, hydrogen sulfide, and many others. The release of gas can make a volcanic eruption more explosive, and some volcanoes produce large amounts of gas. The gases can pose a variety of dangers to surrounding populations in sufficiently high concentrations. Sulfur dioxide (SO2) can irritate the skin, eyes, and respiratory system. Carbon dioxide (CO2) is denser than air, and large releases of CO2 can be lethal if breathable air is displaced, as happened in the 1986 Lake Nyos disaster in Cameroon, where carbon dioxide that had built up in the deep waters of a volcanic lake rapidly rose to the surface and flowed down nearby valleys. Vog, or volcanic smog, is a term used to describe the smog that forms from a complex series of chemical reactions involving volcanic gases (especially sulfur dioxide), air, and sunlight. Volcanoes can also produce toxic gases such as hydrogen sulfide (H2S).

Eruption Preparedness in Your State:

Why is monitoring volcanoes important to aviation?
U.S. Geological Survey

Why is it important to monitor volcanoes?
U.S. Geological Survey