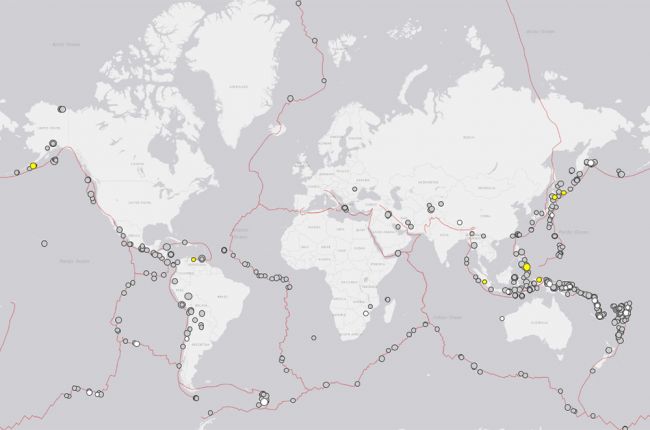 Why do earthquakes happen?

The rocks that make up the crust of the Earth are full of fractures. On some of these fractures – known as faults – rocks slip past each other as the crust rearranges itself in the process known as plate tectonics. But this slipping doesn’t happen easily – rocks are stiff, rough, and under a lot of pressure from rocks around and above them. Because of this, rocks can pull at or push on each other on either side of a fault for long periods of time without moving much at all, which builds up a lot of stress in the rocks. When rocks do finally slip past each other, they move suddenly, releasing the built up stress all at once and sending shockwaves through the surrounding rocks. The shaking that results is what we call an earthquake.

Where do earthquakes happen?

Over 90% of earthquakes – including almost all of the largest and most destructive ones – happen at or near so-called plate boundaries, where the 15 or so major subdivisions (“plates”) of the Earth’s crust and uppermost mantle move towards, alongside, or away from each other[1]. Most of the plates’ movement is focused at these boundaries, so large earthquakes far away from these boundaries are much less common. The image above comes from the U.S Geological Survey’s earthquake catalog[2]. The plate boundaries are shown in red; the grey, yellow, and white circles show the 485 earthquakes with a magnitude greater than 5.5 that were recorded in 2018. Away from plate boundaries, almost all earthquakes are less powerful than magnitude 5.5, but occasional powerful earthquakes can still occur, such as the New Madrid earthquakes of 1811-1812[3]. During this event, a large number of earthquakes, including four with estimated magnitudes greater than 7, struck the region near the borders of Missouri, Kentucky, Tennessee and Arkansas.

Some earthquakes, known as "induced" earthquakes, can be caused by human activities. These activities include the filling of reservoirs behind dams for water supplies and hydroelectric energy production; extraction of groundwater, oil, or gas; underground injection of water for geothermal energy production; and underground injection of wastewater from the oil and gas industry[4]. Since 2009, earthquakes induced by wastewater disposal have become much more common in certain parts of the U.S.[5]. Although most of these earthquakes are too small to feel, some have been large enough to cause moderate structural damage and personal injury, such as the magnitude 5.6 earthquake that struck near Prague, Oklahoma, in 2011, and probably the magnitude 5.8 earthquake that struck near Pawnee, Oklahoma, in 2016. Beginning in 2016, the U.S. Geological Survey has published annual one-year earthquake hazard forecasts[6] for the central and eastern United States that incorporate the risk of damage from induced earthquakes.

The USGS earthquake catalog[2] can be used to find information and maps for earthquakes recorded around the world since the early 20th century.

What is the probability that an earthquake is a foreshock to a larger earthquake?
U.S. Geological Survey