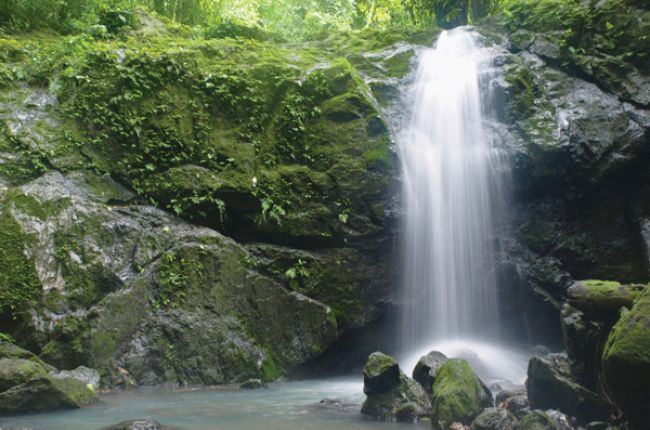 You probably take water for granted because it is so common, but water is a very unusual substance. Its most spectacular property is that ice floats in water. You probably think that's no big deal, but water is almost the only substance in the universe for which the solid floats in the liquid! Water is very unusual in several other ways as well. For example, the heat capacity of water is higher than just about any other substance. The heat capacity of a substance is the amount of heat you need to add to a mass of material to raise its temperature by a given amount. The heat capacity of water is more than twice the heat capacity of natural mineral and rock material. This tends to even out temperature differences on Earth, from day to night and from summer to winter. Water is also the best all-around solvent. More solid substances dissolve in water than in any other liquid.

In nature, electric charges of the same sign repel, and electric charges of different signs attract. When water molecules bond together in a regular structure to form solid ice, the positive sides of the molecules are attracted to the negative sides of adjacent molecules. The bond that is formed is called a hydrogen bond. It is weaker than the bonds between the hydrogen and the oxygen but still strong enough to cause water to freeze into ice.

Why does ice melt when the melting temperature is reached? In nature, every atom or molecule undergoes a vibration, or “jiggling,” because it has thermal energy. The strength of the vibration increases with temperature. When the temperature is high enough, the ice melts, because the thermal vibration of the molecules becomes so strong that the hydrogen bonds are broken. In the ice structure, the molecules have a relatively open arrangement. When the ice melts, the molecules become free to pack together more closely. That is why water is denser than ice.

The water molecules in liquid water attract each other. Inside the liquid, any particular water molecule is acted on by attractive forces from all directions. It is different for a molecule right at the water surface, however. It is attracted by molecules below it and beside it, but not from above. This makes the surface tend to shrink parallel to itself. This shrinkage force is called surface tension. Have you ever watched a soap bubble being made by waving a bubble wand? It's stretched out at first, but as soon as it leaves the wand, it becomes a sphere. That is because surface tension is making the whole bubble pull inward on itself.

The rise of water in a thin tube is called capillary action, or capillarity. It is another effect of surface tension. The surface of water in the tube curves upward around its edge. (This curved surface is called the meniscus.) To understand capillarity, you need to know that there is more to surface tension than just at the water surface. There is also surface tension in the film of water that is contact with the glass of the tube, and also in the film of air that is in contact with the glass of the tube. The surface tension of the air film is stronger than the surface tension of the water film. That causes the meniscus to be pulled upward along the glass surface, and water rises up in the tube. Capillarity explains why a piece of cloth or a paper towel gets wet when you hang its lower edge in water. The tiny passageways between the fibers act as capillary tubes! When the material is treated with a water repellent, the surface tension between the air and the material is reduced. Then water is no longer is drawn up into the fibers.