Many of the world’s oil and gas resources lie beneath the oceans. Advances in exploration, drilling, and production technologies allow production in water more than 10,000 feet deep and more than 100 miles offshore. Major spills are rare but damage sensitive ocean and coastal environments, affect local economies, and are difficult and expensive to clean up. Federal regulations and industry standards have advanced to improve the safety and reduce the environmental impacts of offshore oil and gas production, particularly since the 2010 Deepwater Horizon disaster and oil spill. As drilling and production become possible under increasingly extreme physical conditions, the issues surrounding environmental protection and safety in offshore oil and gas continue to evolve.

Over the last 120 years, offshore drilling has advanced seaward from drilling rigs mounted on shoreline piers, to rigid platforms mounted on the seafloor, to floating and seafloor systems (see above) in water depths up to 10,000 feet. The complexity and high cost of drilling in deep water – several hundreds of million dollars per well – can be justified by the high productivity of the oil fields if the oil price is sufficiently high to make them profitable.1 Oil and gas exploration has also moved offshore in the Arctic, an area with shallow water depths but severe weather hazards. The challenges relating to Arctic offshore drilling differ substantially from those in other offshore regions – see “Oil and Gas in the U.S. Arctic” in this series for more on this topic. 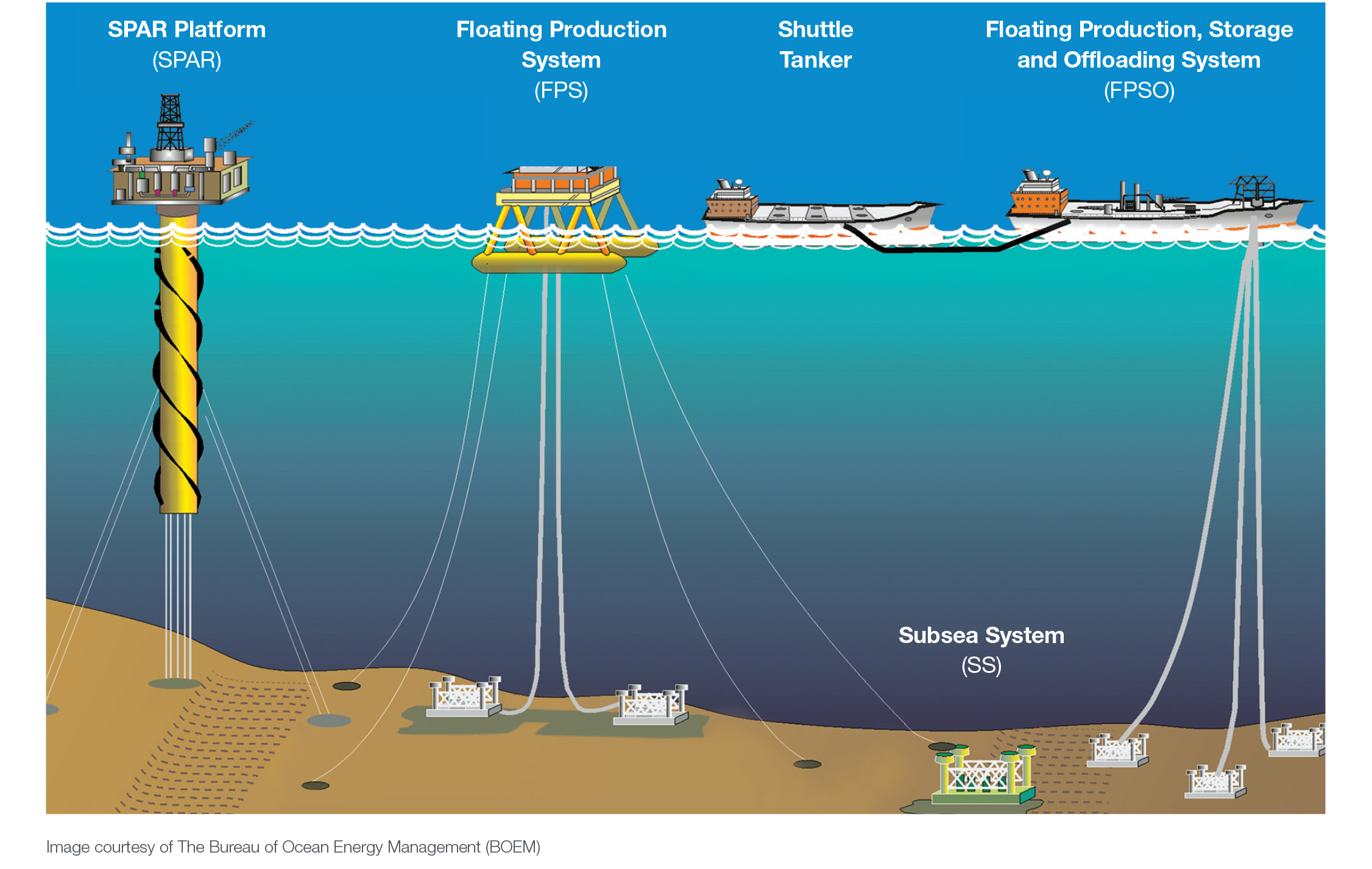 A wide variety of technologies are used to drill offshore in deep water. Image credit: Bureau of Ocean Energy Management.8

Deepwater oilfield development may take ten years from the first exploratory well to the first barrel of oil sold, and pre-production costs, including development wells and specially designed production facilities, may be several billion dollars.1 Safe and successful offshore drilling and production requires extensive seismic imaging and geologic analysis, engineering design and planning, construction of highly specialized equipment, and compliance with federal or state environmental regulations, all of which take a lot of time and money. Companies therefore make decisions about offshore drilling and development based on expected future (rather than current) oil prices. Offshore oil production therefore does not respond to oil prices in the same way as onshore production. For example, while oil prices fell and onshore U.S. oil production plateaued in 2014-2015,9 production on the Gulf of Mexico Outer Continental Shelf (OCS) increased by almost 25% from November 2014 to December 2016.10

Drilling and producing technologies for progressively more complex operating environments are often developed by collaborations between industry, service companies, academia, and research institutions sponsored by the federal government11 or industry.12 Some of the deepest Gulf of Mexico wells are in water more than a mile deep, with some wells extending more than 20,000 feet below the seafloor.13 Companies are planning to explore in deeper and more hazardous regions in the U.S. and around the globe, which will depend on continuing technological advances. Frontiers in this area include: 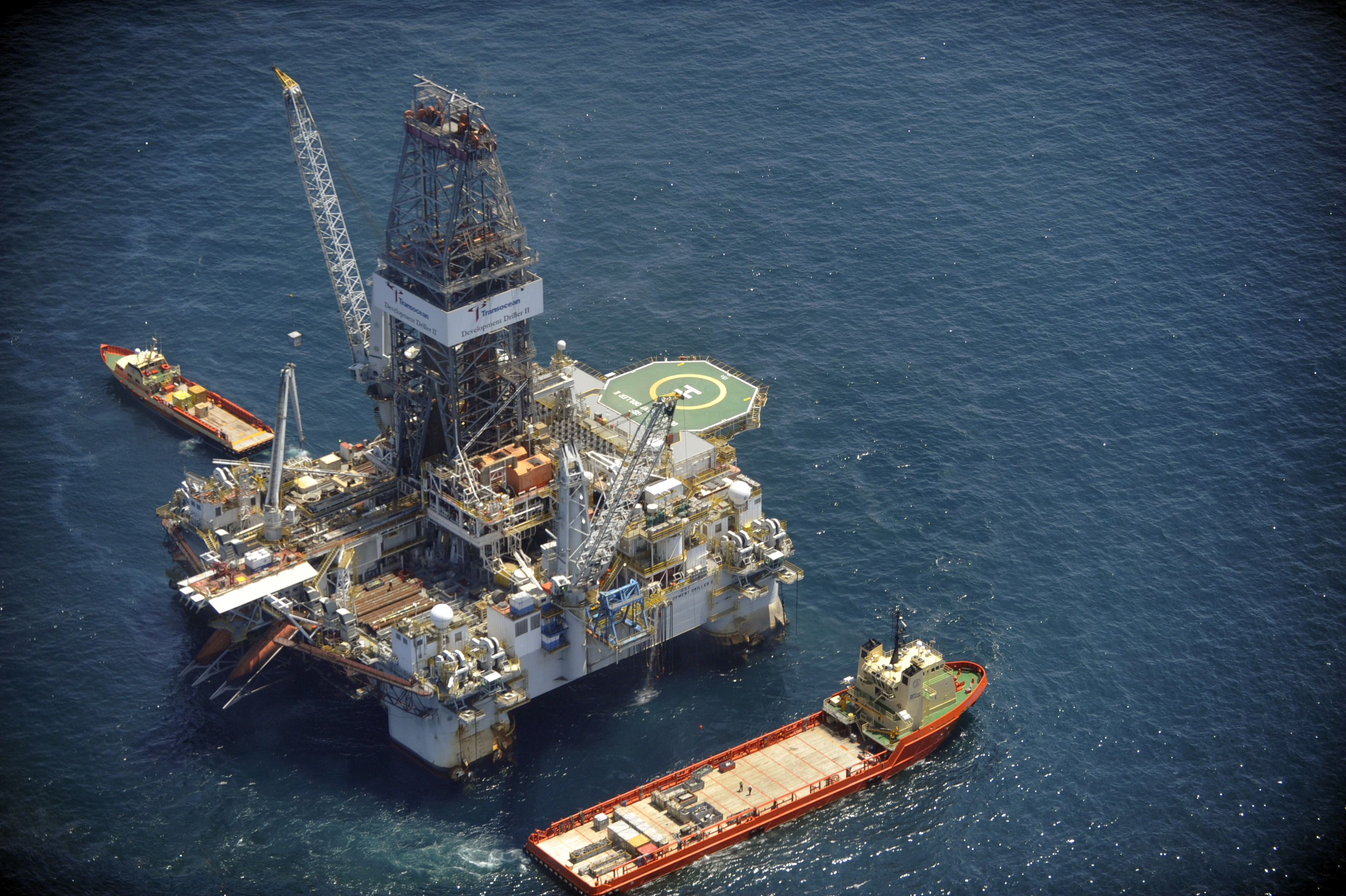 Transocean Development Driller drilling a relief well in the Gulf of Mexico to relieve the pressure on the Macondo well, 2010. This rig can drill to depths of 37,500 feet in as much as 7,500 feet of water. Image credit: U.S. Coast Guard.20

Major offshore oil spills are rare but can cause great harm to coastal and marine wildlife and the people who depend on marine and coastal resources. Developments in offshore environmental policy and activity over the last 50 years have been punctuated by a few major events:

Some large spills have occurred in the Gulf of Mexico since the Deepwater Horizon disaster. An underwater pipeline near the Delta House production facility, 40 miles southeast of Venice, Louisiana, is estimated to have spilled as much as 672,000 gallons in October 2017.29,30 Most of the oil dispersed into the surrounding ocean rather than reaching the shore. In 2004, the Taylor Energy Mississippi Canyon 20A platform, with 25 connected wells, was seriously damaged by Hurricane Ivan. Since then, the company, the U.S. Coast Guard, and several federal agencies have worked to remove the platform, decommission the oil pipeline, and decommission 9 of the 25 connected wells (as of early 2015) using funds provided by Taylor Energy. The remaining wells continue to leak oil into the Gulf of Mexico: in 2014-2015, it was estimated that the leak rate varied from 42 to 2,329 gallons per day.31

Individual states control waters from the coast outward to 3 to 9 nautical miles, depending on the state. Federal regulation covers the Outer Continental Shelf (OCS) – the area beyond state waters out to 200 nautical miles offshore, or to the border with another country’s exclusive economic zone (e.g., in the Gulf of Mexico). The U.S. Bureau of Ocean Energy Management, established in 2011, issues OCS leases for oil, gas, and wind energy development. The U.S. Bureau of Safety and Environmental Enforcement (BSEE), also established in 2011, regulates energy activities on the OCS. Other federal agencies contribute biologic, geologic, environmental, and security expertise and regulatory authority.

BSEE issued its Well Control Rule in 2016 to improve the effectiveness of the equipment that prevents well blowouts.32 Other 2016 rules included updated regulations for production facilities and equipment, and for Arctic drilling. All rules are developed with public input, including public comment sessions. As of 2018, these regulations are being reviewed and revised by the Administration.

In 2016, President Obama banned new offshore oil and gas activities in parts of the Atlantic and Alaska. In 2017, the Administration started work on a revised offshore leasing plan that may expand areas open for oil and gas development.33