The Arctic hosts large oil and natural gas resources both onshore and offshore.1 However, the harsh climate, extreme weather, remote locations, and limited infrastructure make exploration and production expensive and sometimes hazardous. In recent decades, decreased summer sea ice has resulted in increased shipping traffic and may encourage more offshore oil and gas exploration and production. Many concerns over the environmental impact of these activities are based on the Arctic’s fragile, undisturbed ecosystems and the difficulty of monitoring and responding to spills due to remote locations, long, cold winters, and the lack of an Arctic deepwater port to handle emergency response vessels and equipment.2

In 2018, the intersection between oil, gas, and the Arctic environment is a topic of much current discussion due to recent federal decisions to expand federal oil and gas leasing in the coastal area of the Arctic National Wildlife Reserve (the “1002 area”), in a larger area of the National Petroleum Reserve-Alaska (NPRA), and offshore.3 Concerns over increased environmental risks in a region already experiencing rapid environmental and climatic changes are often weighed against the economic benefits of increased exploration and production. Attempting to balance these priorities, the National Environmental Policy Act (NEPA) requires that, before any exploratory studies are authorized, federal agencies must consider impacts on sociocultural, economic, and other natural resources in consultation with other government agencies and the public.

Although the federal government controls 60% of Alaskan land and all the ocean between the limits of state and international waters (i.e., from 3 to 200 nautical miles offshore), much of the oil and gas development to date has been on state and Native land around Prudhoe Bay in Alaska’s North Slope.

National Petroleum Reserve-Alaska (NPRA):4 The Reserve is a 23.6-million-acre tract of federal land set aside in 1923 to ensure future oil supplies for the U.S. Navy. Oil and gas resources in NPRA are significant but difficult to pinpoint because estimates change as exploration proceeds and additional data become available.6 Leasing for oil and gas production in NPRA began in the 1980s, but development has been slow due to complex regulatory processes and the difficulty of operating in environmentally sensitive areas far from established infrastructure.

Arctic National Wildlife Refuge (ANWR): The Refuge was initially protected in 1960; in 1980, it was expanded and parts were designated as wilderness to preserve their unique wildlife, wilderness, and recreational value.7 At the same time, Congress set aside an area on the North Coast (the “1002 area”) to allow for future development of potentially large oil and gas resources.8 The tax reform bill of 2017 (Public Law 115-97) opened the 1002 area to energy development.9 This is the first time since 1980 that the 1002 area has been open to leasing or any activity (such as geophysical surveys) that could lead to producing oil or natural gas.3

State and Native Lands: 28% of Alaska is state-owned and 12% is Native land. As of early 2018, all onshore Alaskan North Slope oil production is on either state or Native lands, including from Native lands on the boundaries of NPRA. Production from federal lands in NPRA is expected to start in the near future.

Offshore: The state of Alaska regulates resources up to 3 nautical miles from the coast. From 3 to 200 nautical miles offshore, resources are regulated by the federal government.10 One notable offshore oilfield is the Northstar Oil Pool, which is located in both state and federal waters near Prudhoe Bay. Production in federal waters started here in 2001 from a man-made gravel island 6 miles offshore.11 Future production is expected in both state and federal waters near existing onshore oil fields in the North Slope area. In 2017, the U.S. Department of the Interior started a multi-year process to develop a new five-year leasing plan that would allow large areas of offshore Alaska to be leased.12

Oil and gas in the North Slope region of Alaska (north of the dotted blue line). Red lines are pipelines. Federal lands include the National Petroleum Reserve–Alaska (NPRA) and the Arctic National Wildlife Refuge (ANWR), which includes wilderness (darker green) and 1002 (light yellow) areas.4 See text for more information about the features in this map. Image credit: U.S. Geological Survey5

Oil and gas development on federal land is regulated by the U.S. Bureau of Land Management. On state and Native lands, and in state waters, drilling and production of oil and gas and the underground disposal of oilfield waste are overseen by the Alaska Oil and Gas Conservation Commission.13

In federal waters, the U.S. Bureau of Ocean Energy Management (BOEM) manages leasing, including resource assessments to estimate potential lease value, and review and approval of drilling plans, including any necessary environmental assessments. The Bureau of Safety and Environmental Enforcement (BSEE) regulates all offshore drilling and production activities. The Arctic Drilling Rule released by BSEE in 201614 requires rigorous safety controls beyond those required in other offshore areas. These include having equipment on hand to cap an out-of-control well and capture any leaking oil, and having access to a separate rig that can drill a relief well and plug a compromised well permanently before seasonal ice encroaches on the drill site or within 45 days, whichever is sooner. Although improvements have been made, the safety and environmental impacts of offshore oil and gas development in the Arctic remain highly controversial.15,16

Oil production on the North Slope of Alaska began in 1977. The developed area is focused on a narrow coastal strip running about 100 miles east to west in the vicinity of Prudhoe Bay (see map). In the 1970s and 80s, access roads, well sites, oil and gas processing facilities, and support facilities were constructed using gravel. By the early 2000s, roughly 9,200 acres were under gravel.17 More recent exploration reduces the surface impact by using ice roads and ice drilling sites that are constructed each winter, and small gravel production sites with multiple wells per site. For example, the Alpine field, which was discovered in 1994 to the west of the older oilfields,18 uses about 100 acres of gravel drill pads, facilities, and roads to tap a 25,000-acre oil reservoir – as of early 2018, the field had produced 465 million barrels of oil.19 In 2018, Greater Mooses Tooth-1, a field located in NPRA, west of Alpine, will begin producing oil from a single 12-acre gravel drill pad designed to support 33 wells.20 Eight miles of gravel road and parallel above-ground pipeline, including two bridges, will connect the pad to existing Alpine field facilities, for a total gravel footprint of 73 acres.

North Slope oil is collected by a network of local pipelines and then sent 800 miles through the Trans-Alaska Pipeline System (TAPS) to the south coast of Alaska. Except for small quantities refined in Alaska, most of the oil is loaded onto tankers and shipped to refineries on the West coast or occasionally in Hawaii. In areas where the soil is either permanently frozen (permafrost) or never freezes, the Trans-Alaska Pipeline is buried; in areas where the ground freezes and thaws with the seasons, the pipeline is generally elevated above ground.21 Where highways, animal crossings, or unstable hillslopes required pipeline burial in unstable permafrost, insulation or refrigeration is used to keep the ground cold.22 Safety features include systems that monitor variations in pipeline flow and pressure to alert response teams to the location of probable leaks;22 tracks that allow the pipeline to move without breaking during earthquakes (see photo);23 and heat transfer pipes that move heat from the buried pipe to the air, helping keep permafrost cold and stable.22 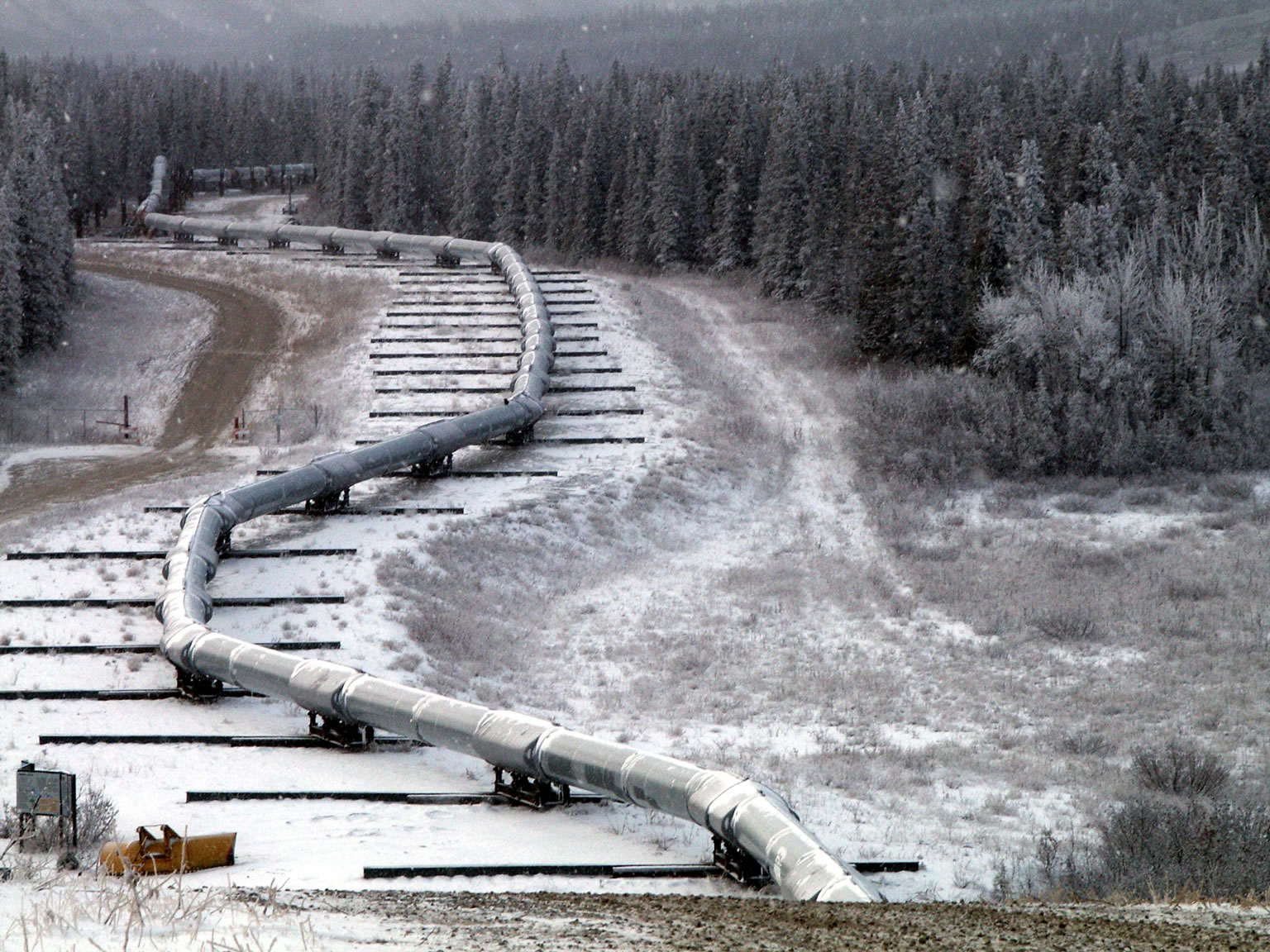 The Trans-Alaska oil pipeline is mounted on sliders where it crosses the Denali fault. During a large (magnitude 7.9) earthquake in 2002, this system allowed the pipeline to move without breaking. Image credit: Tim Dawson, U.S. Geological Survey24

The largest North Slope oil spill occurred in 2006, when a pipeline leaked 267,000 gallons of crude oil onto the tundra in the Prudhoe Bay field. The leak was caused by the operator (BP)’s failure to prevent internal corrosion in a 29-year-old pipeline that had not been properly maintained and inspected. BP was fined $25 million and required to implement a system-wide pipeline integrity management program.27 Cleanup operations included removing oil from snow and vegetation without disturbing the tundra and underlying soils, preventing the spread of leaked oil into nearby lakes, and restoring the site of the spill.28

In 1989, the Exxon Valdez oil tanker was carrying North Slope oil when it ran aground and ruptured, spilling 11 million gallons of crude oil into Prince William Sound in southern Alaska. This spill was the largest oil spill in the United States until the 2010 Deepwater Horizon disaster, which was almost 20 times larger. Shipping regulations developed in response to the spill, and supplemented in 2009, primarily focus on Alaskan oil exports. Regulations now require double-hulled tankers, tugboat escorts with spill response capability, U.S. Coast Guard electronic tracking throughout Prince William Sound and 60 miles into the Gulf of Alaska, and local availability of response and recovery equipment and trained personnel.30 The National Oceanic and Atmospheric Administration continues to monitor the ongoing wildlife recovery from the Exxon Valdez spill.31

Arctic Resources by the Numbers1,33

Who are the Arctic Oil & Gas Producers?

As of 2018, three nations produce oil and gas north of the Arctic Circle: the U.S. (Alaska), Russia, and Norway. Canada, Greenland, Iceland, Sweden, and Finland currently have no Arctic production. Production may expand to other arctic nations in the future. Canada, Finland, Iceland, the Kingdom of Denmark (Greenland), Norway, Russian, and the United States exchange information, best practices, and regulatory experiences through the Arctic Offshore Regulators Forum.32 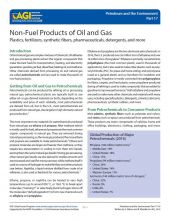 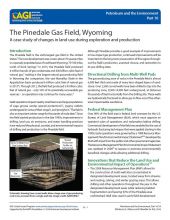 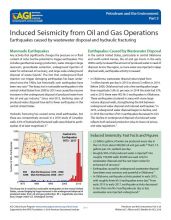 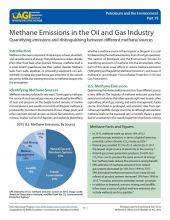 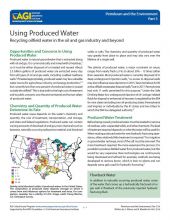 June 1, 2018
Opportunities and Concerns in Using Produced Water Produced water is natural groundwater that is extracted along with oil and gas. It is commonly salty and mixed with oil residues,1 so it must be either disposed of or treated and reused. About 2.5 billion gallons of produced water are extracted...