The methods, volumes, risks, and regulation of oil and gas transportation

The U.S. has millions of miles of oil and gas pipelines, thousands of rail cars, vessels, and barges, and about 100,000 tanker trucks that move oil and gas from wells to processing facilities or refineries, and finally to consumers. The U.S. also imports and exports large volumes of oil, refined products, and natural gas by pipeline and ship. This vast transportation web includes regional and national storage sites for crude oil, heating oil, gasoline, and natural gas, which help with unexpected demand or delivery interruptions.

Across the U.S., natural gas is transported almost entirely by pipeline, and over 90% of crude oil and refined petroleum products are transported by pipeline at some point. If you have gas-powered heat in your home, there are almost certainly gas distribution lines running down your street and into your house. If you live in a large city or a major oil-producing region, there are almost certainly oil and/or gas transmission pipelines in your area. Pipelines are all around us; like water pipes or electricity lines, they form a critical part of our national infrastructure and generally operate without most people noticing.

When pipelines are well constructed and maintained, spills and leaks are very rare, but no transportation system is 100% safe. Oil spills on land can have significant local impacts; spills in the ocean can have regional impacts; and gas leaks emit methane, which is a potent greenhouse gas and contributor to ozone pollution. Spills and leaks also waste resources (and therefore money), so there are environmental, public health, and economic incentives for maintaining a safe and efficient transportation system for our energy resources.

Gas transmission (blue) and hazardous liquid (red) pipelines in the United States as of March 2018. Image does not include gas distribution lines. Hazardous liquid pipelines are mostly those used for crude oil, refined products, and other petroleum liquids, but also include pipelines used to transport ammonia and carbon dioxide. Image credit: Pipeline and Hazardous Materials Safety Administration.1

In 2014, U.S. pipelines transported almost all of the natural gas produced and used in the United States, as well as over 16 billion barrels of crude oil and refined products3 (this number is about twice the total U.S. consumption of crude oil and refined products because they are transported multiple times between well, refinery, and retail outlet4).

Except for above-ground shut-off valves, most pipelines are buried and marked by signs that warn against digging, identify the line location, and provide emergency contact information in case of a leak or spill.

In 2017, roughly 140 million barrels of crude oil were transported by rail in the United States, a 64% decrease compared to 2014 volumes.5 This decline was due to the opening of new crude oil pipelines and fewer shipments from the Midwest to the East Coast as coastal refineries imported more crude oil.6 Crude oil imports by rail from Canada were about 48 million barrels in 2017.7

In 2013, trucks carried about 1.2 billion tons (about 380 billion gallons or 9 billion barrels) of gasoline, diesel, and aviation fuel.8 Many of the shipments were from refineries or bulk storage facilities to over 160,000 retail outlets.9 Trucks are the most versatile form of transportation because they don’t rely on the presence of pipelines, railways, or water. As a result, they are used for most short-distance transportation of oil and refined products. However, trucks are not particularly energy-efficient, requiring three times as much energy as a train (which is itself less efficient than a barge or pipeline) to move the same amount of material,10 so trucks are less attractive for long-distance transportation.

Barges have traditionally moved small amounts of crude oil from the Gulf Coast to Midwest refineries, and are also used to transport some refined products. Barge usage increased dramatically with the rapid development of the Bakken Shale (North Dakota and Montana) in the early 2010s, as crude oil could be shipped south by river to refineries in the lower Mississippi and Gulf Coast. In 2010, barges delivered 46 million barrels of crude oil to U.S. refineries. This rose to 244 million barrels in 2014, before decreasing with the downturn in the industry, with 165 million barrels delivered in 2016.12 Inland water transportation uses roughly 75% less energy than trucks and 25% less energy than rail, but is only viable where navigable rivers are close to both the source of oil and its destination.10

Canada – the U.S. largely imports Canadian crude oil and exports refined products. Pipelines crossing the U.S.-Canada border include 31 oil and 39 natural gas pipelines, plus 16 pipelines moving other commodities such as carbon dioxide and industrial chemicals.15 In 2016, 91% of all oil imported into the U.S. from Canada was transported by pipeline, 3% by rail, and 5% by marine vessels.16

Mexico – the U.S. largely imports Mexican crude oil and exports refined products, both by ship and by rail. The U.S. exports natural gas to Mexico via pipeline. U.S. natural gas exports to Mexico have grown from 333 billion cubic feet in 2010 to 1.37 trillion in 2016, and are projected to increase to 2.17 trillion cubic feet in 2020 as planned pipelines come online.17

In 2017, the U.S. exported over 650 billion cubic feet of natural gas as liquefied natural gas (LNG).21 This represents a huge increase from about 50 billion cubic feet exported annually from 1985 through 2011, and is almost four times the amount of LNG exported in 2016. This increase was driven by increased domestic gas production, increased liquefaction capacity, and low-cost export facilities converted from import terminals that had been constructed to import LNG before the domestic gas boom began in 2006. Almost all the LNG is exported from the Gulf Coast, but as of early 2018, export terminals are being built at existing import terminals in Georgia and Maryland.22 As of early 2018, almost half of all U.S. LNG exports were delivered to Mexico, South Korea, or China.23 Natural gas produced in Cook Inlet, Alaska, was exported to Japan from Alaska’s Kenai terminal in 2015 but not in 2016 or 2017,24 pending decisions over the future of the terminal.

Storage facilities are used to ensure a steady supply of important fuels, reducing the risks of supply disruption due to natural disasters, conflicts, and other major events.

Natural gas and crude oil. The natural gas industry uses nearly 400 underground storage facilities to ensure that supply remains steady during periods of high demand.25 The federal government’s Strategic Petroleum Reserve can store over 700 million barrels of crude oil in underground salt caverns near refineries along the Gulf Coast (enough oil to supply the entire United States for roughly five weeks).26 This reserve is part of a global storage system to respond to major supply disruptions, and was recently tapped in late August 2017 in response to supply disruptions from Hurricane Harvey.

Refined petroleum products. The northeast U.S. is home to two federal oil reserves for use in the event of a brief supply disruption. One holds a million barrels of home heating oil (created in 2000 and first used to reduce supply disruptions from Hurricane Sandy);27 the other holds a million barrels of gasoline (created in 2014 in response to Hurricane Sandy).28 Each reserve is spread over three locations in the Northeast. In total, these reserves contain roughly half a day’s supply of gasoline and a day’s supply of heating oil29 (based on winter usage) for the entire northeast. However, supply disruptions rarely affect the entire northeast U.S., so shipments can be made from these reserves to targeted areas for a longer period of time. 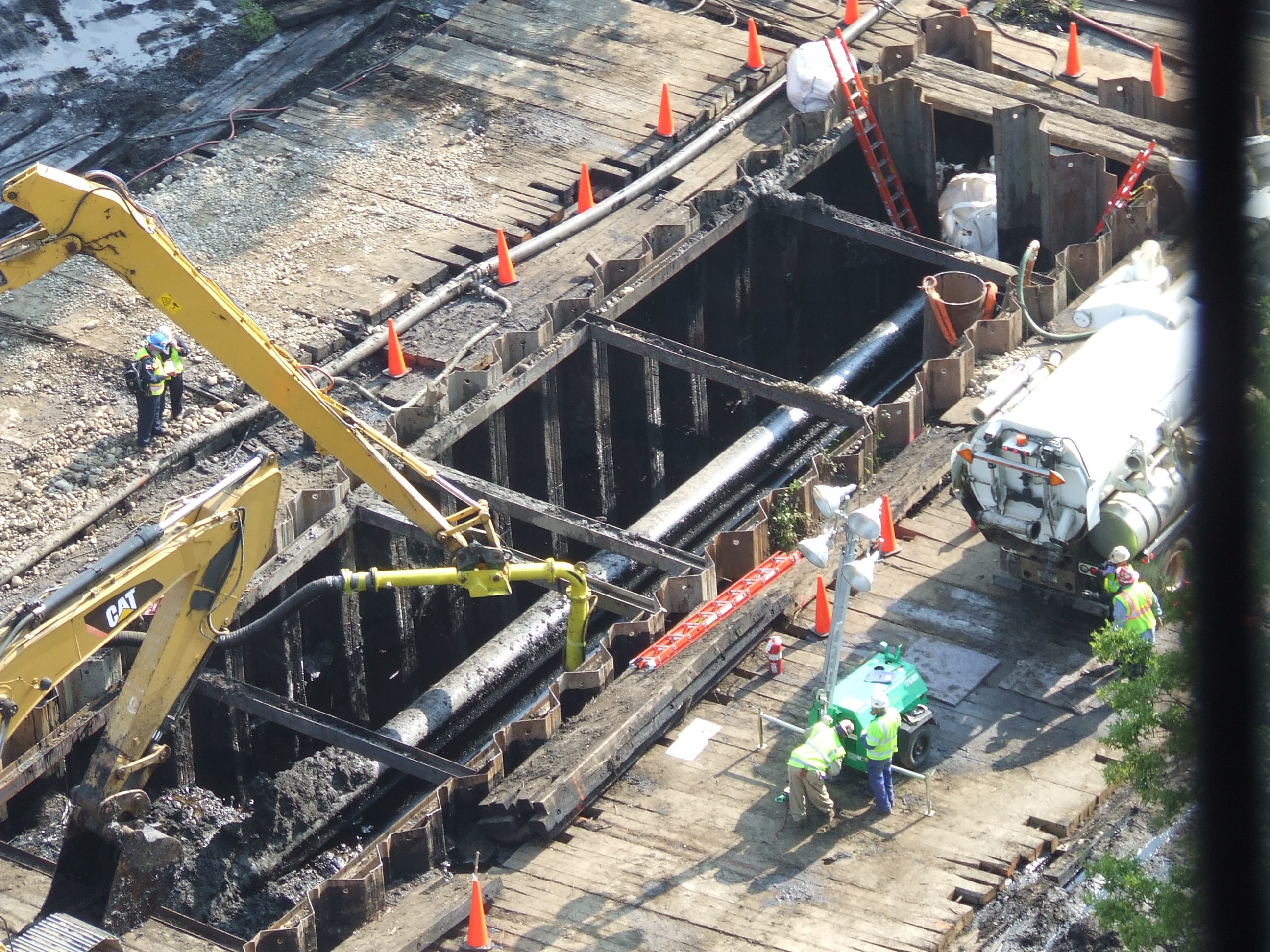 The damaged portion of Enbridge Line 6B is prepared for removal, having spilled hundreds of thousands of gallons of heavy crude oil near Marshall, Michigan, in July, 2010. Image credit: U.S. Environmental Protection Agency.32

A tiny proportion of all the oil transported in the U.S. is leaked or spilled; most of the transportation system is safe and effective. However, because the quantities of liquids being transported are so enormous, even a tiny portion of this can be large enough to have significant environmental impacts in the area of the spill.

For each method of transport, spill volumes represent less than 0.001% of the total amount transported. The larger total amounts spilled from pipelines are mostly because almost all of the oil and refined products in the U.S. are transported by pipeline over long distances. Pipelines are less likely to spill than trucks (they don’t get into crashes), but when they do spill, the spills can be larger and more difficult to clean up, especially because most pipelines are buried underground and carry large volumes of oil and refined products.

Although oil and refined product pipeline operators employ leak detection systems, such as pressure or flow monitoring and/or internal surveys of pipe integrity, roughly half of all leaks are found by the public or local operating personnel.38

The Pipeline and Hazardous Materials Safety Administration (PHMSA) in the U.S. Department of Transportation regulates the pipeline transport system and shipments of hazardous materials by land, sea, and air.39 The Federal Energy Regulatory Commission (FERC) regulates the practices and rates of interstate oil pipelines,40 while PHMSA regulates their operation. FERC also reviews applications for construction and operation of natural gas pipelines and LNG export and import terminals to certify their compliance with safety and environmental laws.

Water used for drilling, oil and gas production, and hydraulic fracturing (not fully quantified33 but probably in the range of a few billion gallons per day34), and for refining oil (1-2 billion gallons per day)35 must also be transported from its source to where it is needed. In addition, “produced water” extracted along with oil or gas (roughly 2.5 billion gallons per day)36 must be transported to a disposal or reuse site. In established oil-producing areas or at permanent facilities, water may be moved by pipelines, but it is otherwise moved largely by truck. Oilfield waters are generally not federally regulated as hazardous wastes and so are not regularly measured and tracked. However, state or federal regulations may require certain management or handling practices for oilfield waters.37