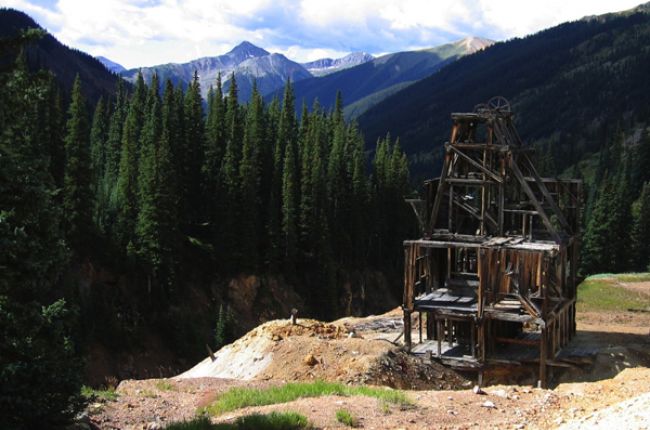 Modern mining operations actively strive to mitigate potential environmental consequences of extracting metals, and such operations are strictly regulated in the United States. The key to effective mitigation lies in implementing scientific and technological advances that prevent or control undesired environmental impacts.

Operations and waste products associated with metal extraction and processing are the principal causes of environmental concerns about metal mining. Concerns include:

The largest physical disturbances at a mine site are the actual mine workings, such as open pits and the associated waste rock disposal areas. Mining facilities such as offices, shops, and mills, which occupy a small part of the disturbed area, are usually salvaged or demolished when the mine is closed. The open pits and waste rock disposal areas are the principal visual and aesthetic impacts of mining. Underground mining generally results in relatively small waste rock disposal areas ranging from a few acres in size to tens of acres (0.1 km2). These areas are typically located near the openings of the underground workings. Open pit mining disturbs larger areas than underground mining, and thus has larger visual and physical impacts. As the amount of waste rock in open pit mines is commonly two to three times the amount of ore produced, tremendous volumes of waste rock are removed from the pits and deposited in areas nearby.

These impacts remain on the landscape until the disturbed areas are stabilized and reclaimed for other uses, such as wildlife habitat or recreation areas, after mining has ceased.

Soil and Water Contamination from Waste Rock and Tailings

Mobilization of metals in waste rock

Waste rock disposal areas are usually located as close to the mine as possible to minimize haulage costs. If not properly managed, erosion of mineralized waste rock into surface drainages may lead to concentrations of metals in stream sediments. This situation can be potentially harmful, particularly if the metals are in a chemical form that allows them to be easily released from the sediments into stream waters. When this occurs, the metals are considered to be “mobilized” and “bioavailable” in the environment.

In some cases, bioavailable metals are absorbed by plants and animals, causing detrimental effects. Although current U.S. mining and reclamation practices guided by environmental regulations minimize or prevent waste rock erosion into streams, disposal of waste rock in places where it could erode into surface drainages has occurred historically. These conditions still exist at some old or abandoned mines.

Slag is a by-product of the smelting process. Most slags, because they are composed primarily of oxidized, glassy material, are not as significant a potential source of metals released into the environment as mine wastes and mill tailings. However, some slags may contain remnant minerals that can be a potential source of metal release to the environment.

Although the character of waste rock varies with the type of ore, many waste rocks contain sulfide minerals associated with metals, such as lead, zinc, copper, silver, or cadmium. An important sulfide mineral common in waste rock is pyrite, iron sulfide. When pyrite is exposed to air and water, it undergoes a chemical reaction called “oxidation.”  The oxidation process produces acidic conditions that can inhibit plant growth at the surface of a waste pile. Bare, non-vegetated, orange-colored surface materials make some waste rock areas highly visible, and they are the most obvious result of these acidic conditions.

If water infiltrates into pyrite-laden waste rock, the resulting oxidation can acidify the water, enabling it to dissolve metals such as copper, zinc, and silver. This production of acidic water, is commonly referred to as “acid rock drainage.” If acid rock drainage is not prevented from occurring, and if it is left uncontrolled, the resulting acidic and metal-bearing water may drain into and contaminate streams or migrate into the local groundwater. The acidity of contaminated groundwater may become neutralized as it moves through soils and rocks. However, significant levels of dissolved constituents can remain, inhibiting its use for drinking water or irrigation.

Where acid rock drainage occurs, the dissolution and subsequent mobilization of metals into surface and groundwater is probably the most significant environmental impact associated with metallic sulfide mineral mining. Acidic and metal-bearing groundwater occurs in abandoned underground mine workings and deeper surface excavations that encounter the groundwater of a mineralized area. Because they are usually located at or below the water table, underground mines act as a type of well which keeps filling with water. Because these waters migrate through underground mine workings before discharging, they interact with the minerals and rocks exposed in the mine. If sulfide minerals are present in these rocks, especially pyrite, the sulfides can oxidize and cause acid rock drainage.

Tailings produced from the milling of sulfide ores — primarily copper, lead, and zinc ores — may have concentrations of pyrite that are greater than those common in waste rock. Also, because tailings are composed of small mineral particles the size of fine sand and smaller, they can react with air and water more readily than waste rocks. Therefore, the potential to develop acidic conditions in pyrite-rich tailings is very high.

At some sites, gas and particulate emissions that were released to the atmosphere from historical smelting operations have been a source of human health concerns and environmental impacts. Recognizing the importance of minimizing and mitigating this impact, modern smelters use processes that drastically reduce particulate and sulfur dioxide emissions.

In the past, sulfur dioxide has been the most common emission of concern, because it reacts with atmospheric water vapor to form sulfuric acid or “acid rain.” The acidic conditions that develop in the soils where these emissions precipitate can harm existing vegetation and prevent new vegetation from growing. Barren areas near smelting operations have been an enduring environmental impact of historical smelting. Some impacted areas that have existed for decades are now beginning to recover.

In some cases, the emissions from older metal smelters may have affected human health. For example, elevated levels of lead in blood have been measured in residents of some communities located near lead-zinc smelters during their operation. Today, smelting operations, combined with environmental controls, are implemented to prevent potential environmental and health issues related to emissions.

Old mining sites are inherently interesting to people, but potentially dangerous as well. They may have surface pits, exposed or hidden entrances to underground workings, or old intriguing buildings. Another safety consideration at some mine sites is ground sinking or “subsidence.” The ground may sink gradually where underground workings have come close to the surface. Because an unexpected collapse can occur without warning, such areas usually are identified and should be avoided. When modern mines are closed, mine owners mitigate such hazards by closing off mine workings, regrading and decreasing the steep slopes of surface excavations, and salvaging or demolishing buildings and facilities.

In some states where old mining areas are common, such as Colorado and Nevada, current mine owners, government agencies, or other interested parties may undertake reclamation and safety mitigation projects that address hazards at these sites. At a minimum, these programs identify hazards, install warning and no trespass signs, and fence off dangerous areas. The closing of entrances to old underground workings may also be done as a part of these efforts. Some abandoned mine workings have become important habitats for bat colonies. Closure of mine openings can be designed to allow the bats continued access and protection. This practice is especially valuable for endangered bat species. Because many old mine sites may not be safe, the casual visitor to such sites is cautioned to exercise care and avoid entering them.

What role does recycling play in our metal supply?
American Geosciences Institute