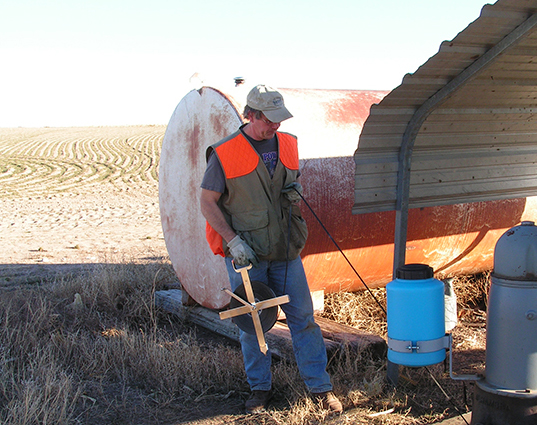 ALEXANDRIA, Va. – The American Geosciences Institute (AGI) is pleased to recognize Mr. Rex C. Buchanan, Director Emeritus of the Kansas Geological Survey (KGS), as the 2018 recipient of the William B. Heroy Jr. Award for Distinguished Service to AGI.
Mr. Buchanan’s contributions to AGI span decades and are among the highlights of his career as a geoscientist and science communicator, and as interim director of the KGS from 2010 to 2016. His service to AGI has strengthened AGI’s publications and programs alike.
Most recently, Mr. Buchanan was an active member of AGI’s Critical Issues Advisory Committee from its inception in 2013 to his retirement in 2016. In this role, he helped define the mission and structure of the Critical Issues program and provided perceptive guidance and support to AGI staff.
Mr. Buchanan also served on the planning committee for the 2016 Critical Issues Forum, “Addressing Changes in Regional Groundwater Resources: Lessons from the High Plains Aquifer.” He moderated a panel on groundwater perspectives from Kansas and Nebraska, and shared his extensive knowledge of the scientific, policy, and social issues associated with groundwater.
An expert on human-caused earthquakes, Mr. Buchanan currently serves as Director of the KGS Consortium to Study Trends in Seismicity. In April 2015, he spoke on AGI’s first Critical Issues Webinar, “Induced Seismicity in the Mid-Continent.” Since that time, the Critical Issues Webinar series has grown substantially, and has attracted thousands of live attendees from different states, countries, sectors, and professions. Mr. Buchanan’s early support was instrumental in this program’s expansion.
Previously, Mr. Buchanan co-edited Geowriting, a Guide to Writing, Editing and Printing in Earth Science, 5th Edition – published in 1995 and revised in 2004 – and was co-author, with Lisa Rossbacher, of Geomedia, a Guide for Geoscientists Who Meet the Press – published in 1988. He served as Chair of AGI's Publications Advisory Committee from 1992-1993 and was a committee member for several years prior.
Buchanan writes, “I was pleased to receive the Heroy award. AGI has long served a critical role in representing all of the geosciences. One of the highlights of my career has been working with AGI staff and other geoscience professionals who contribute their time and talent to AGI efforts.”
The award is named after William B. Heroy Jr.’s exemplary service to the American Geosciences Institute. Heroy’s professional accomplishments were exceeded only by his love of geology and his commendable modesty in the face of such achievements.
AGI directly, or in cooperation with its member societies, makes a number of awards each year to recognize particular excellence in the geosciences.  In addition, AGI works with its member societies to foster nominations of deserving geoscientists for consideration in a number of National Science Awards.  To learn more about AGI awards, go to https://www.americangeosciences.org/awards.
About AGI
The American Geosciences Institute (AGI) is a nonprofit federation of 52 scientific and professional associations that represents more than a quarter-million geoscientists. Founded in 1948, AGI provides geoscientists with access to scholarly information, serves as a voice of shared interests in the profession, plays a major role in strengthening geoscience education, and strives to increase public awareness of the vital role the geosciences play in society's use of resources, resiliency to natural hazards, and health of the environment.
AGI is a not-for-profit 501(c)(3) organization dedicated to serving the geoscience community and addressing the needs of society. AGI headquarters are in Alexandria, Virginia.
The American Geosciences Institute represents and serves the geoscience community by providing collaborative leadership and information to connect Earth, science, and people.
_____________
AGI Contact:
Joseph Lilek, Communications Manager
jlilek@americangeosciences.org
571.483.5445
###