Most businesses did not expect to make changes in per­manent staffing throughout 2020, and less than one-third of companies expected decreases in permanent staffing. In addition, between September and December 2020, the per­centage of businesses expecting to increase staffing grew from 10% to 16%. Similarly, while most companies did not expect changes in temporary or contract staffing, between 24% and 35% of companies expected decreases in temporary and contract staffing, and this percentage declined to 18% by the end of 2020. 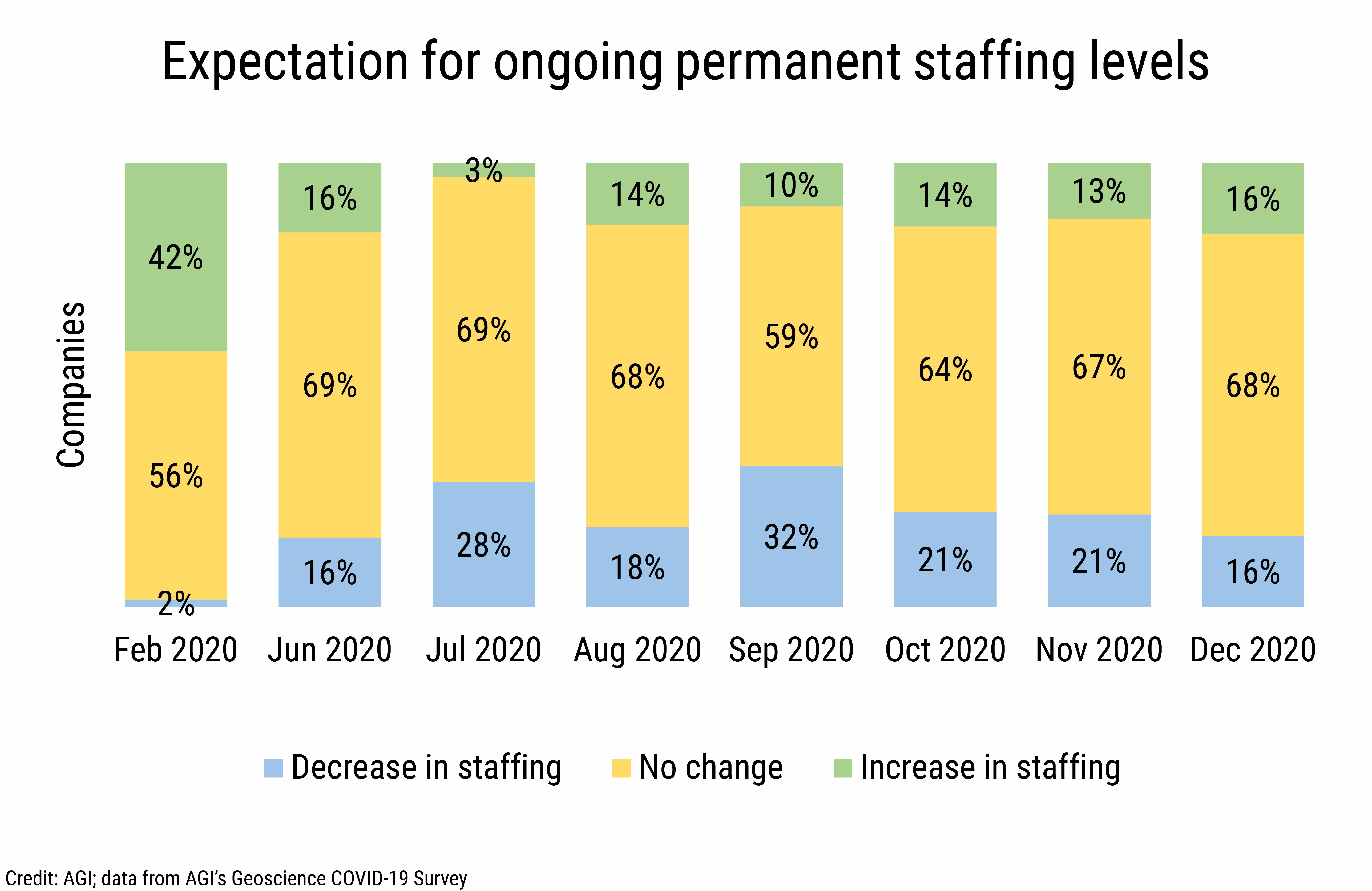 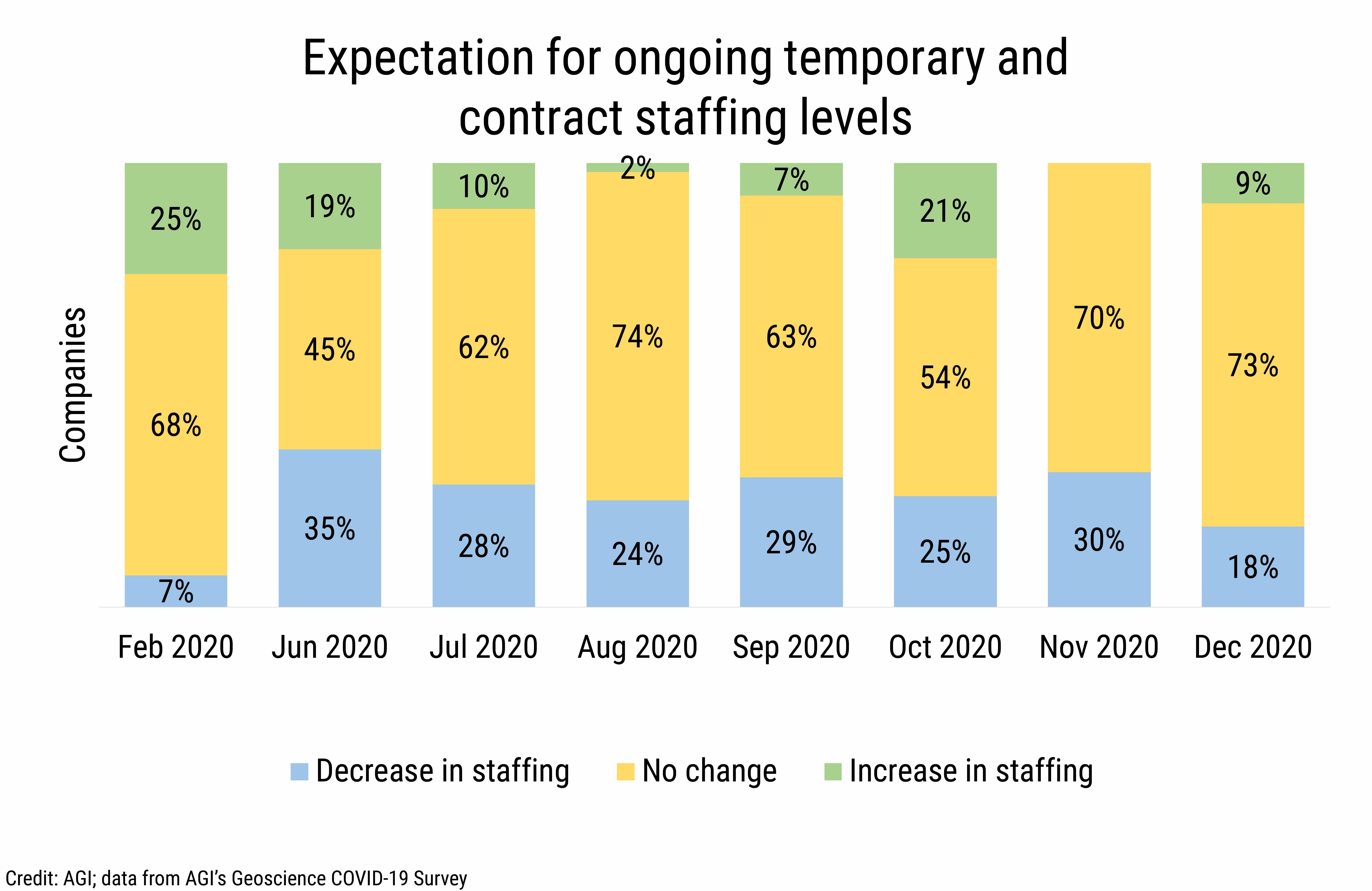 In December, we asked about the benefits and challenges of how work and research were being conducted during the pandemic. Employers reported many positive aspects to telework, including increased efficiency for collaborative projects and meetings, increased employee morale related to work/life balance, greater global reach with meetings, increased frequency in communication between manage­ment and staff, more time for employees to focus on work and research, and reduced expenses related to operational overhead and travel. Several employers also noted how the pandemic provided the catalyst to become more streamlined with respect to processes and protocols, and others noted how telework was more beneficial than originally expected and that they expect to incorporate it as a long-term work­place policy available to employees.

While remote work has its share of benefits, the primary challenge reported by employers is the lack of in-person communication. Employers also noted how remote work caused issues with onboarding new employees, maintain­ing organizational culture, having less in-depth and shorter interactions with clients and colleagues, and having fewer opportunities for creative interactions that generate new ideas. IT challenges also were noted as an issue, especially in cases where employees did not have sufficient internet bandwidth to meet their computing needs. Some employers commented on the challenges related to field and lab work especially when multiple employees and customers were involved.

In September and December, we asked about the distribution of staffing across different workplace environments. Over this period, companies reporting employees working full-time in the office or working at home declined from 52% to 42% and 96% to 92%, respectively. At the same time, companies reporting employees working in the office on a part-time basis increased from 76% to 83%. Furthermore, the percent­age of employees working in lab facilities, doing field work, or working at client sites or remote offices also increased between September and December.

Over 70% of employers provided technology equipment such as computers, monitors, printers, software, office supplies, and furniture for employees who were working from home. 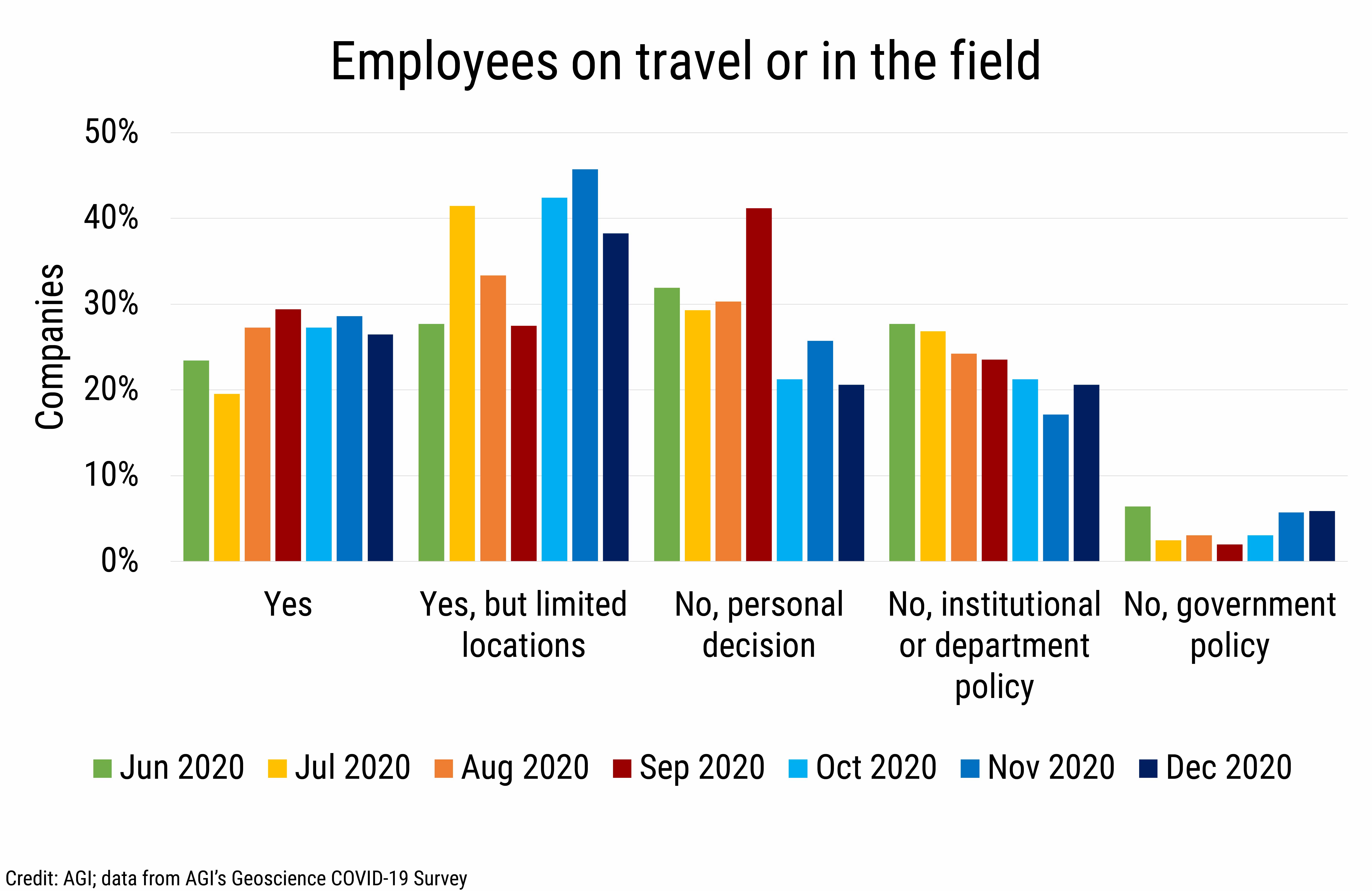 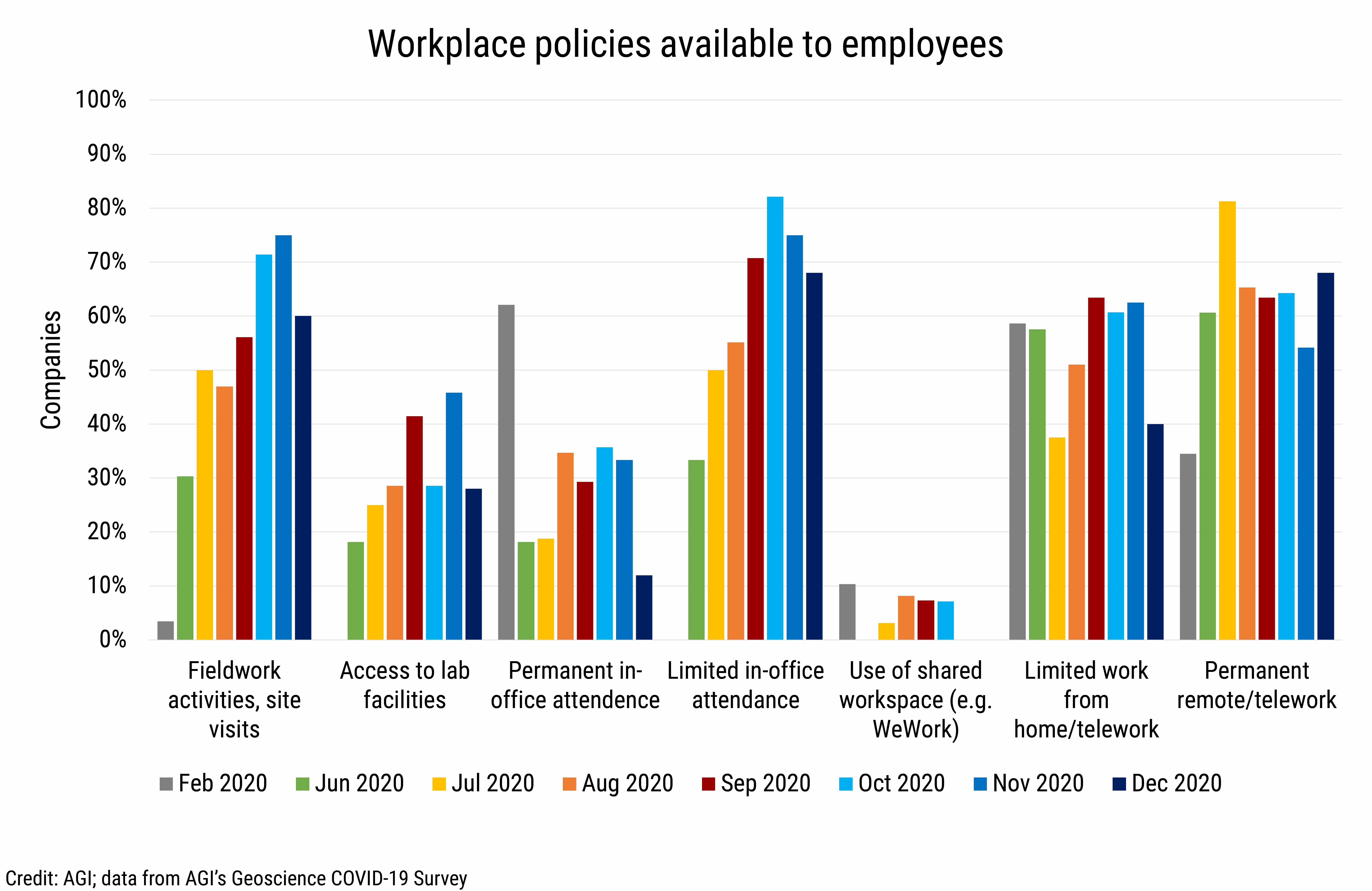 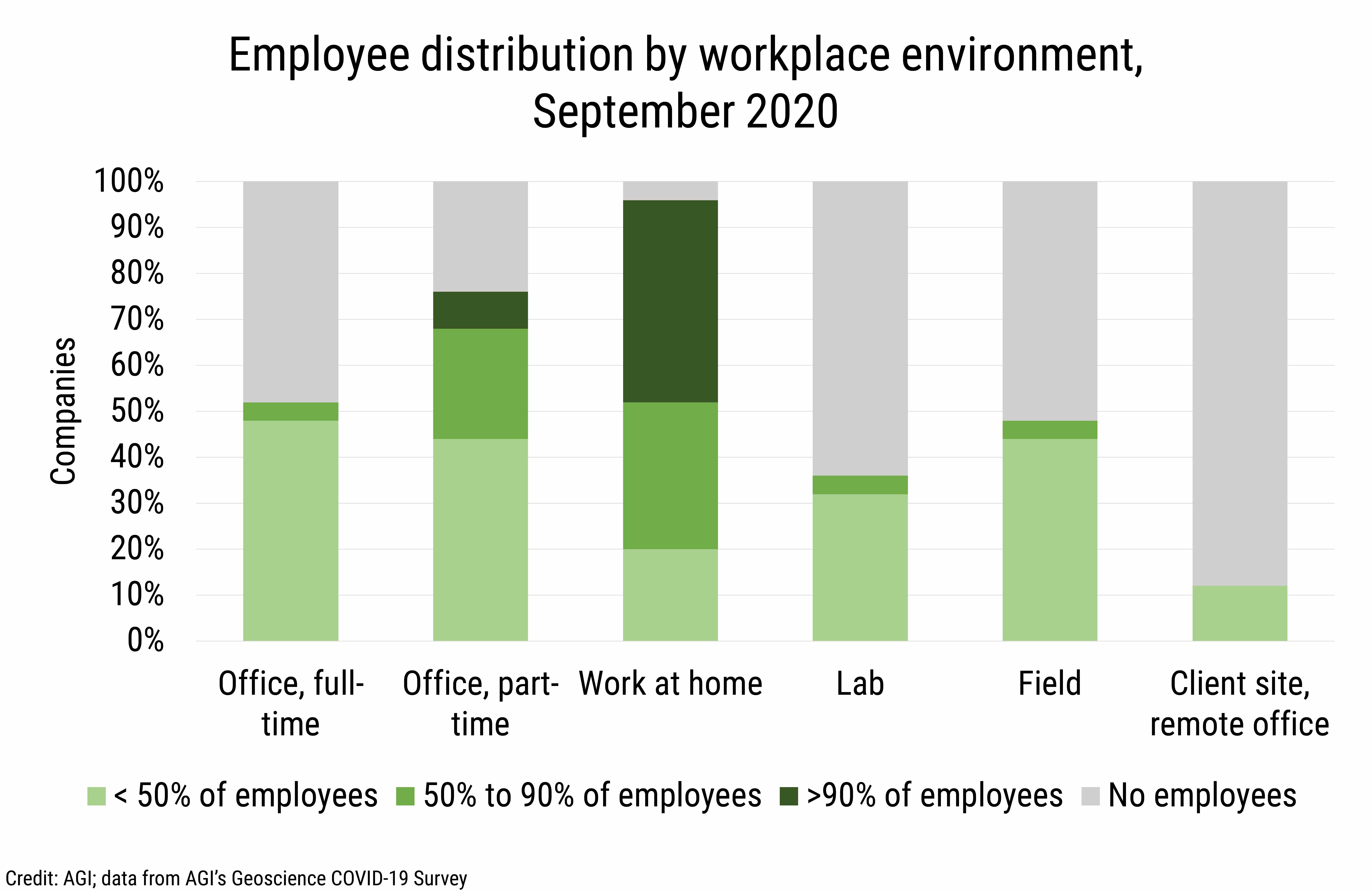 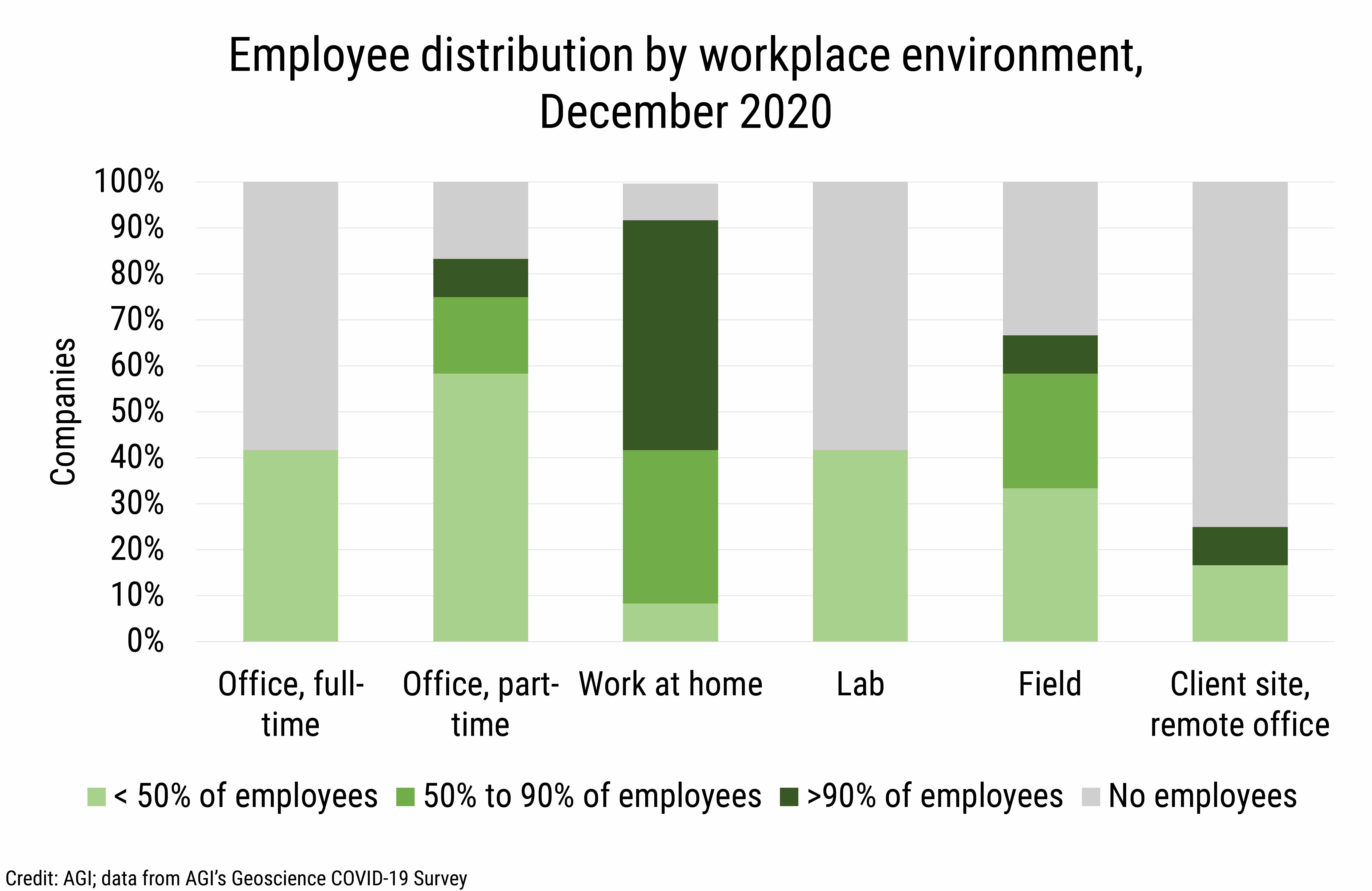 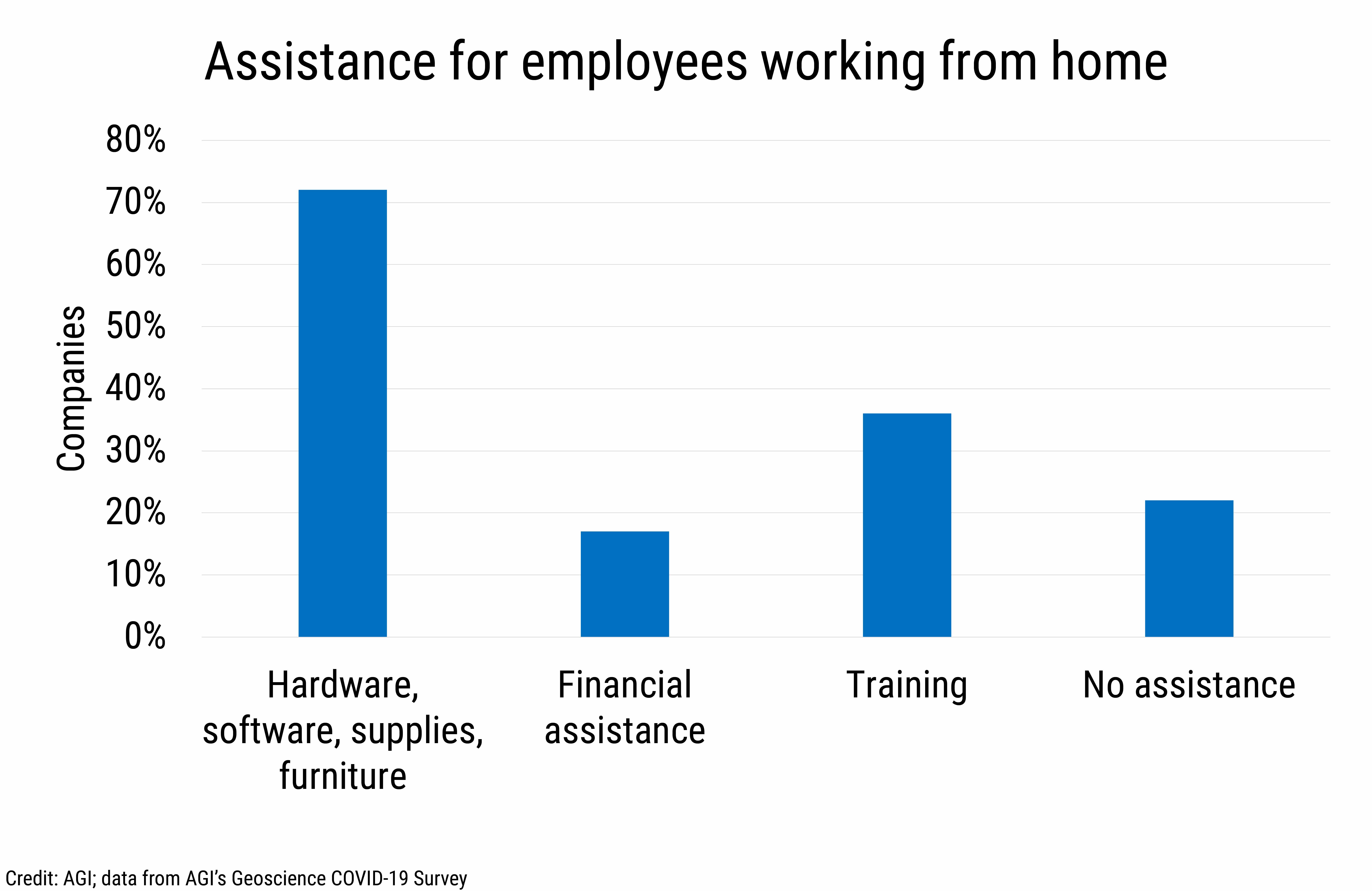 Zoom was the most commonly used online communication platform by businesses followed by Microsoft Teams (89% and 47% respectively), and 68% of businesses reported using multiple online communications platforms. While most employers reported that their employees were moderately to extremely proficient with using virtual platforms and tools, employees were reported to be more proficient with the use of virtual meeting platform features than with collaborating virtually on projects. 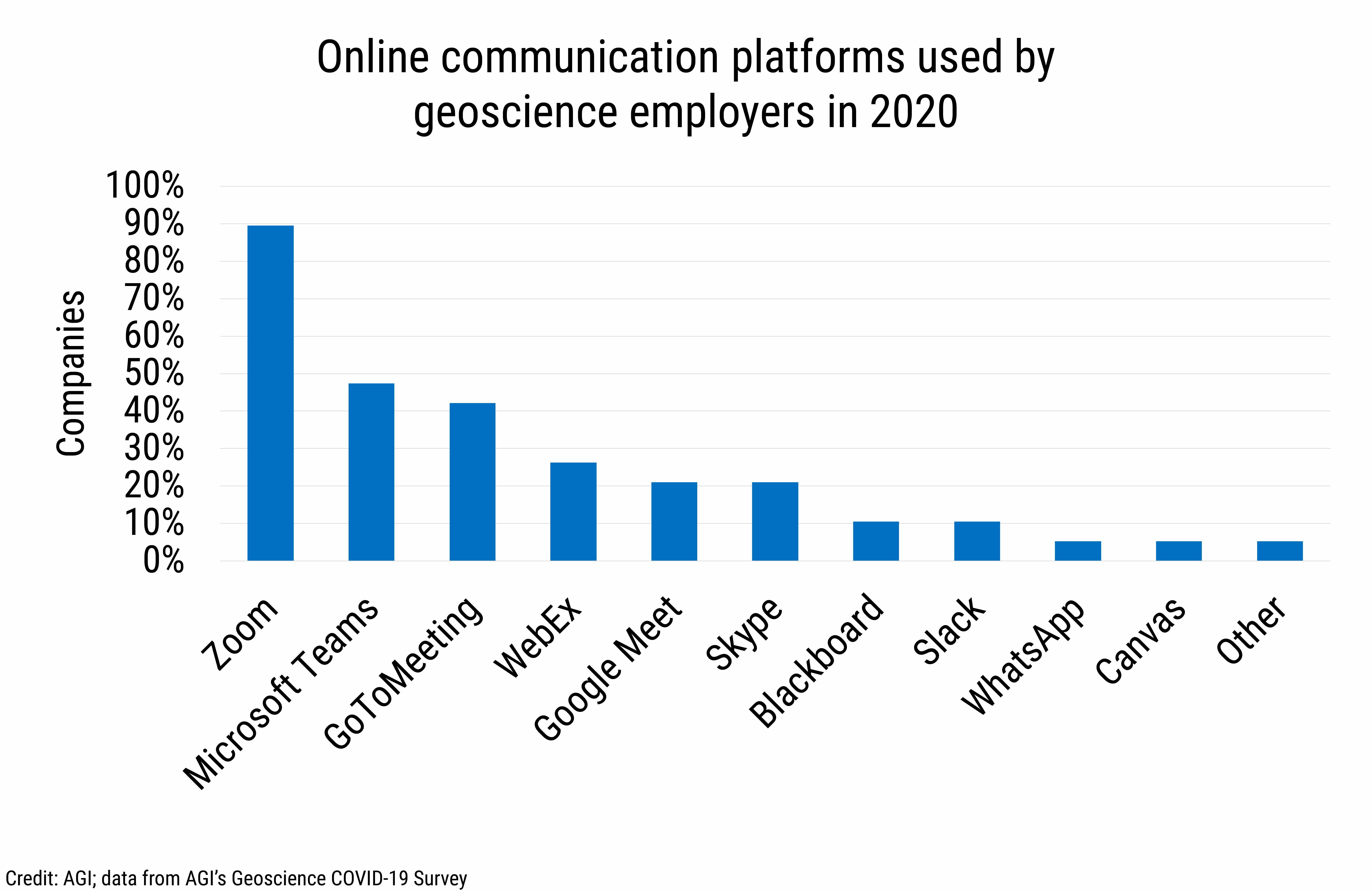 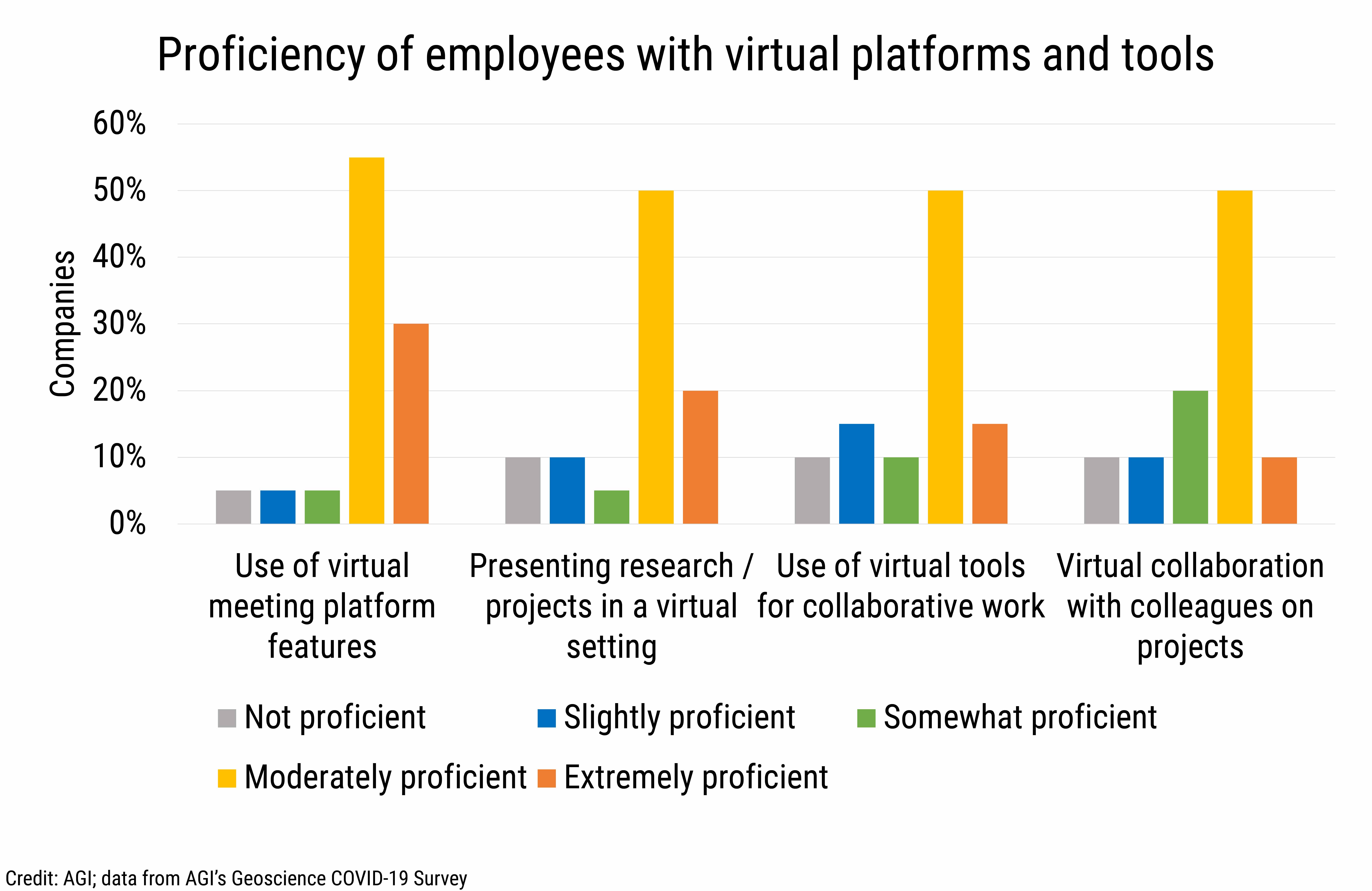 In addition to hiring trends, we also inquired about chal­lenges employers were facing in hiring and recruiting new geoscience talent. In November, employers report budgetary restrictions such as hiring freezes, difficulty in finding qual­ified individuals, and issues with ineffectiveness of online interviewing as the primary challenges. Employers also reported struggling with the large number of applications for open positions. 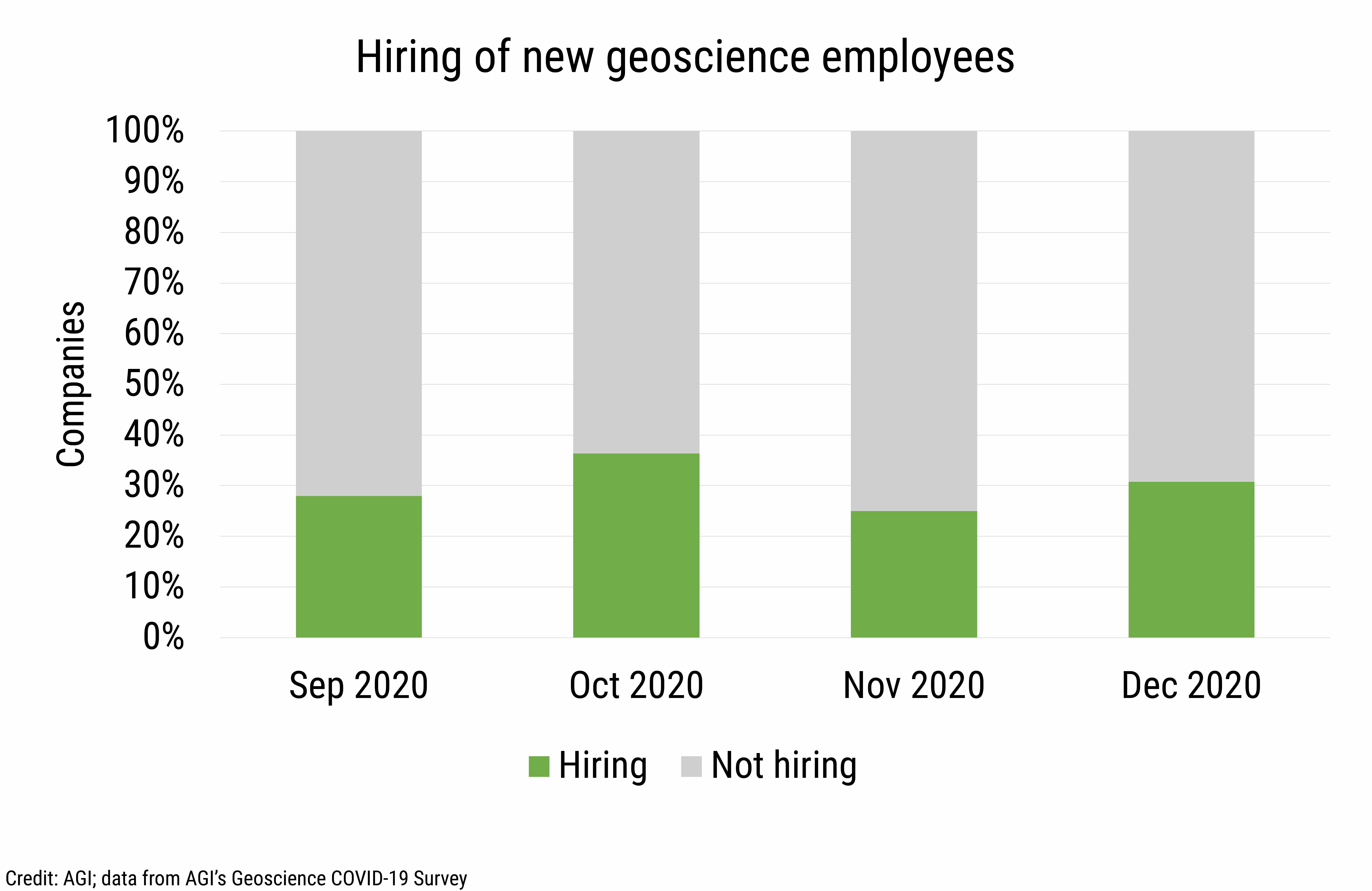 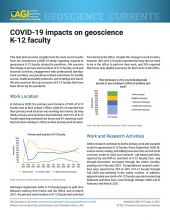 May 7, 2021
This data brief provides insights from the most recent results from the Geoscience COVID-19 study regarding impacts to geoscience K-12 faculty during the pandemic. We examine the change in primary work location of K-12 faculty, work and research activities, engagement with professional develop­ment... 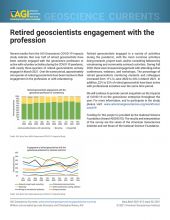 Retired geoscientists engagement with the profession 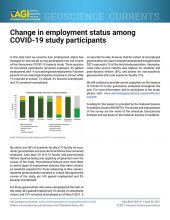 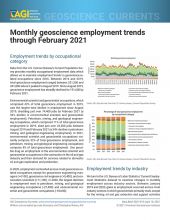 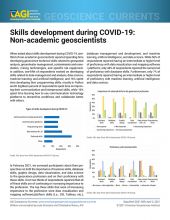 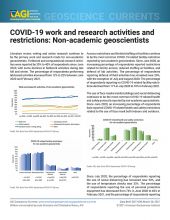 March 26, 2021
Literature review, writing and online research continue to be the primary work and research mode for non-academic geoscientists. Fieldwork and computational research activi­ties were reported by 30% to 40% of respondents since June 2020, with some declines in fieldwork activities during late fall...