By the numbers: Wyoming

Geoscience is the study of the Earth and the complex geologic, marine, atmospheric, and hydrologic processes that sustain life and the economy. Understanding the Earth’s surface and subsurface, its resources, history, and hazards allows us to develop solutions to critical economic, environmental, health, and safety challenges.

Your State Source for Geoscience Information

Water Use in Wyoming

Energy and Minerals in Wyoming 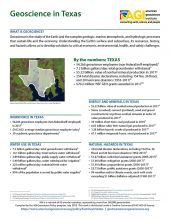