Groundwater is any water found underground in the cracks and pores in soil, sand, or rock. Groundwater provides 25% of the fresh water used in the United States.1 It is particularly important for irrigation and domestic uses in arid or remote areas, where surface water may be in short supply or far away. Groundwater is replenished when rainfall soaks into the ground, but it can take hundreds to thousands of years to replace what we extract. In arid areas, high demand for groundwater and slow replenishment provide challenges for sustainable groundwater management. 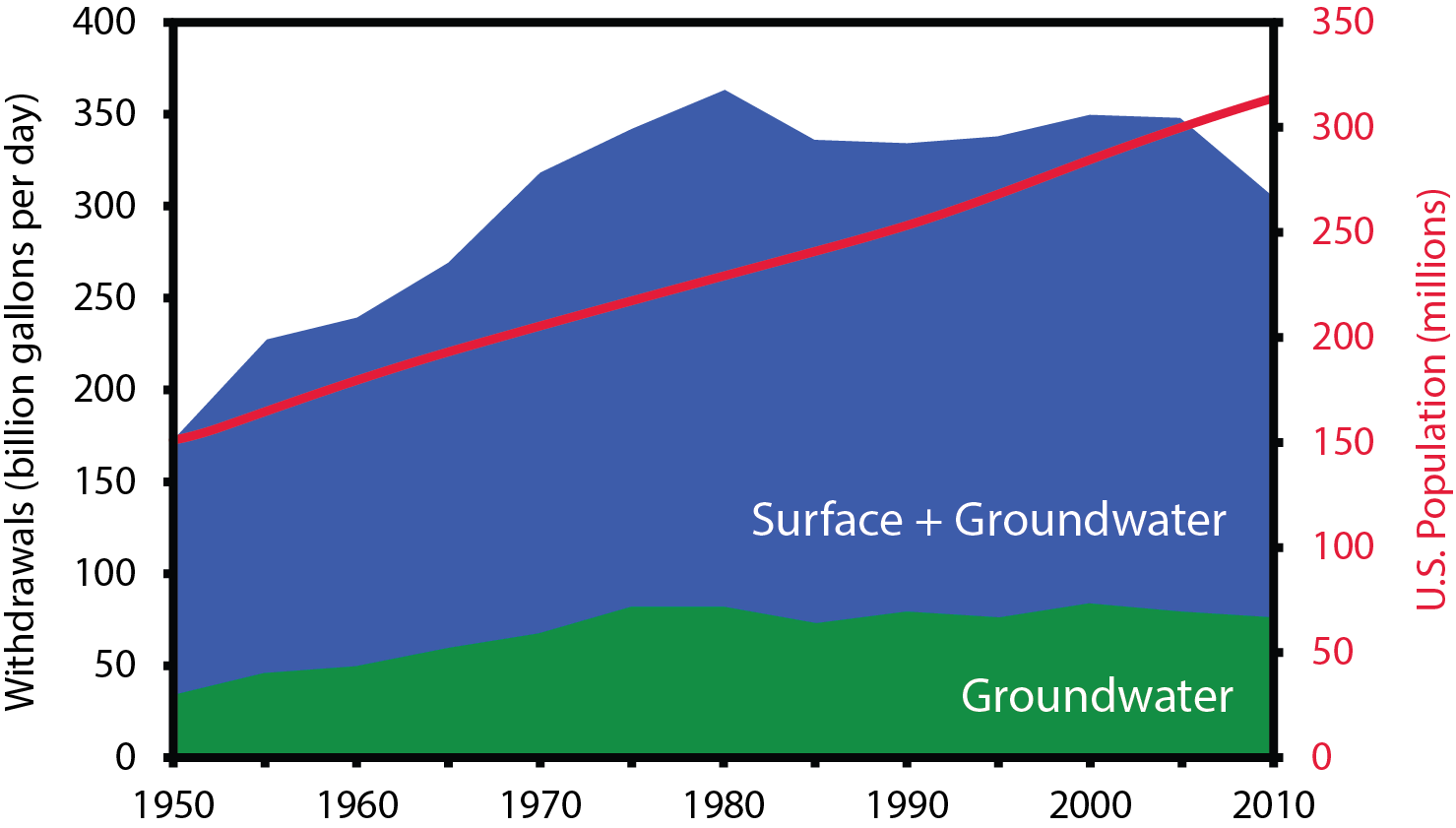 Fresh groundwater and total fresh water withdrawals in the U.S. over time. For most of the 20th century, water use increased to support a larger population. Much of the recent decrease in water use is due to more efficient or reduced irrigation [2]. 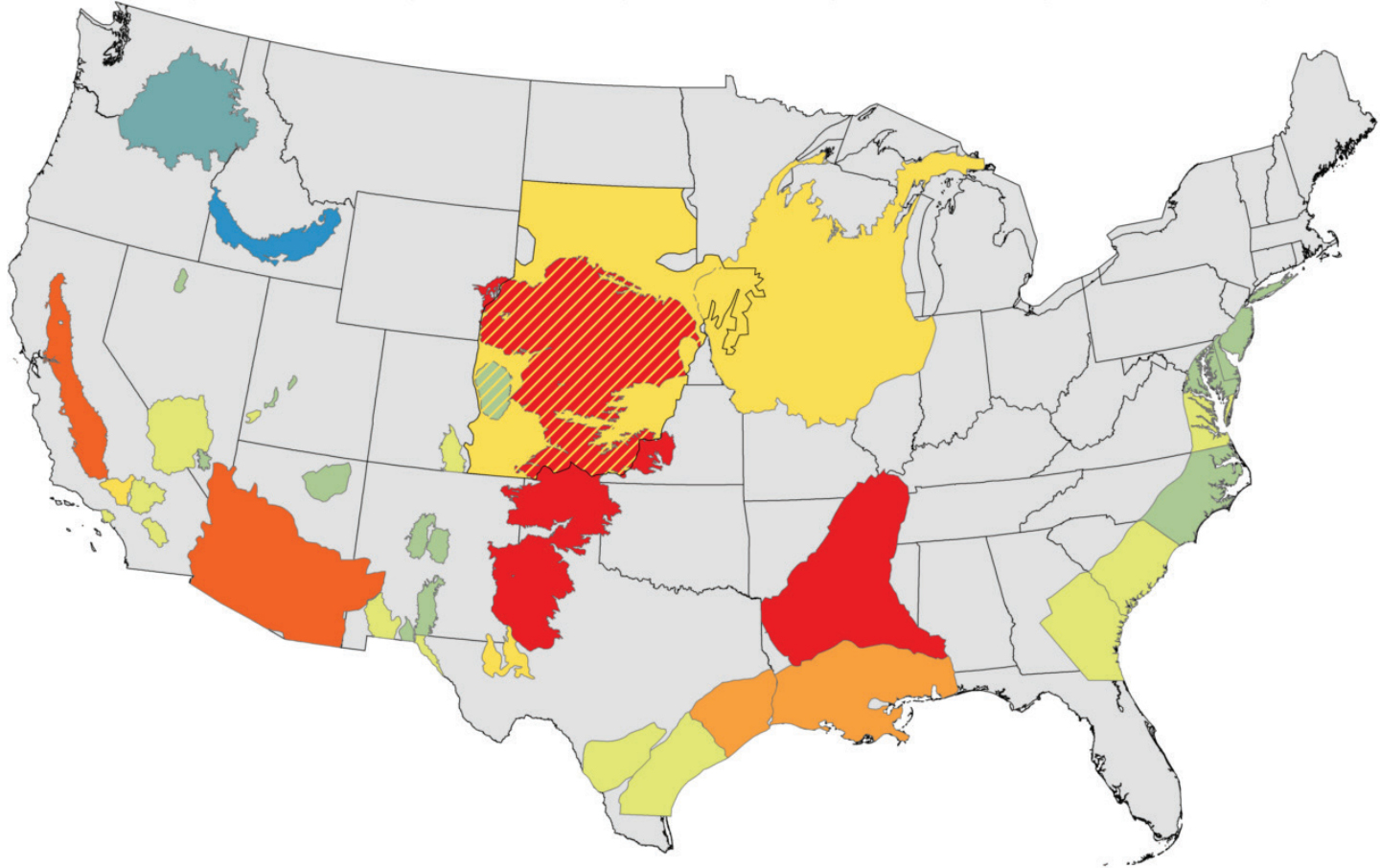 The Ogallala Aquifer is the largest aquifer in the United States. It is part of the High Plains aquifer system, which underlies parts of eight states from Texas to South Dakota. 90% of the water extracted from the Ogallala Aquifer is used for irrigation,3 supplying the water for roughly one-third of all irrigated agriculture in the country.3

Since the 1930s, massive water withdrawals have rapidly depleted the southern and central portions of the aquifer. In parts of Texas and Kansas, water levels have dropped by over 150 feet.5 The U.S. Geological Survey monitors the Ogallala Aquifer through its High Plains Water-Level Monitoring Study,6 reporting changes in water level and storage to Congress every two years. State geological surveys and other state agencies also monitor the aquifer.

Water withdrawals only tell part of the story. Many water uses involve the borrowing of water - for thermoelectric power generation, domestic and commerical use, mining, and industry - most of which is returned to water bodies after it has been used.7 Water consumption refers to the water that is withdrawn for human use but not returned. Irrigation accounts for around 80% of fresh water consumption:7 most is lost to evaporation and the incorporation of water into crops. Although groundwater provides 25% of the fresh water used in the United States, it provides 43% of the fresh water used for irrigation.1 As a result, groundwater accounts for around 40% of U.S. fresh water consumption.

Number of water wells in the United States
15.9 million

96% of groundwater withdrawn is fresh; 4% is salty

Aquifer: a rock formation that contains and can transmit water
Fresh water: water with low salt concentrations (typically less than 500 parts per million)
Withdrawal: water taken from ground or surface water sources for human use. Also called “water use”
Consumption: the portion of water withdrawn that is not returned to water sources after use 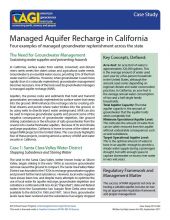 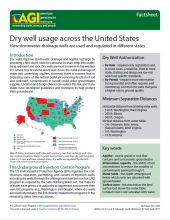 September 7, 2017
Introduction Dry wells improve stormwater drainage and aquifer recharge by providing a fast, direct route for rainwater to drain deep into underlying sediment and rock. Dry wells are most common in the western U.S. where clay or caliche layers slow down the natural drainage of water into... 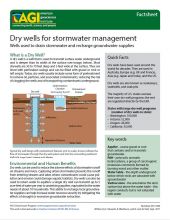