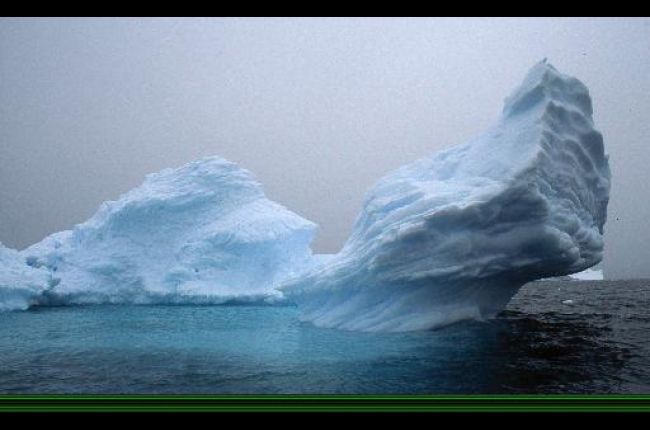 Thin cores of ice, thousands of meters deep, have been drilled in the ice sheets of Greenland and Antarctica. They are preserved in special cold-storage rooms for study. Glacier ice is formed as each year's snow is compacted under the weight of the snows of later years. Light bands correspond to the relatively fresh, clean snows that fall in the summer when warmer conditions bring more moisture and precipitation. Dark bands mark the polar winter season, when little new snow falls on these frigid deserts and blowing snow is mixed with dust, discoloring the white snow. The layers are only millimeters to centimeters thick. Counting the yearly layers can date them. The oxygen in the water molecules also holds a key to past climate. Scientists are able to use the oxygen atoms in the glacial ice as a proxy for air temperature above the glacier.

Ice sheets on the continents have grown and then shrunk again four times in the past half million years. Several climate proxies make that very clear. Deposits of sediment left by these glaciers are present over large areas of North America and Eurasia. Proxies for global temperature show gradual cooling as the ice sheets form, and then very rapid warming as the ice sheets melt back. The brief periods of warm temperatures between glaciations are called interglacials. Past interglacials have lasted only about twenty thousand years. Humankind developed civilization only within the very last interglacial-and you are still in it!

What is the difference between weather and climate?

What factors determine the climate?

How does climate affect vegetation?

How can local climates vary over very short distances?

What is a climate proxy?