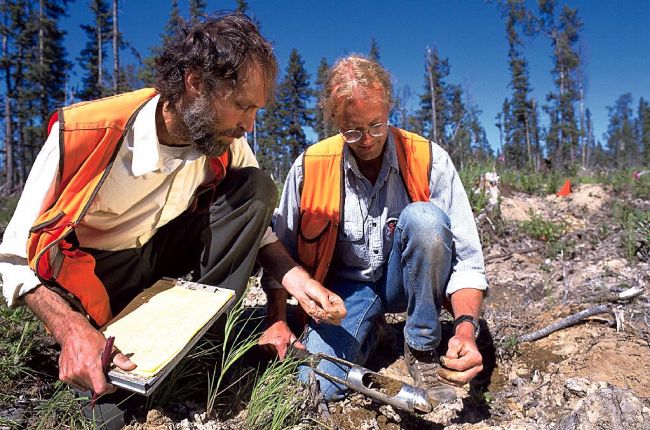 There are many kinds of soil. A group of soil scientists from the U.S. made up a way of grouping soils that is used around the world. This grouping has hundreds of named soil types! All soils, however, are made of just a few main things. Soil consists of fine particles of minerals and rocks, decaying plants, and living plants and animals. You can easily see the larger plants and animals. There are even more tiny plants and animals that you can only see with a microscope.

Soil forms as the solid rock of the Earth, called bedrock, breaks down. It usually takes thousands of years for soil to form from bedrock. In some places, soil forms directly on top of bedrock. In other places, soil forms on a thick layer of loose rock and mineral material. This material, called sediment, has been carried from distant areas by rivers or glaciers.

What determines the type of soil that forms? Only two things are most important: bedrock type, and climate. It should make sense that different kinds of bedrock make different kinds of soil. Climate is also important. Water helps chemical reactions in soil to take place. Young soils are soils that have just started to form. In young soils bedrock is more important than climate in determining the type of soil. In old soils, which have become fully formed, climate is usually more important.

Most soils are only a meter or two deep. The nature of the soil changes as you go down. When soil scientists study a soil, they look carefully at the whole thickness of the soil. This type of section of soil is called a soil profile.

What materials make up soil?

How important are water and other chemicals in soil?

What is soil erosion and how can we control it?