Geologic maps have provided the key to finding new gold deposits in Nevada.

The western states contain many gold deposits (Fig. 1), and a zone of faulted sedimentary and igneous rocks in northeastern Nevada, known as the “Carlin” trend, is the most productive region in the country. Since the 1961 discovery of the Carlin deposit and the subsequent development of mines, the region has become the largest U.S. gold producer (more than 1,600 metric tons worth $21 billion [as of the early 2000s]). Geologic maps have been vital in the process of discovering and developing these deposits. Geologists used the maps to show relationships between rocks that host gold deposits and structures that localized ore-forming fluids. These relationships, which are key to delineating areas favorable for gold deposits, cannot be defined without geologic maps. The Genesis Mine area is a good example of how geologic maps guide mineral exploration on the Carlin trend. 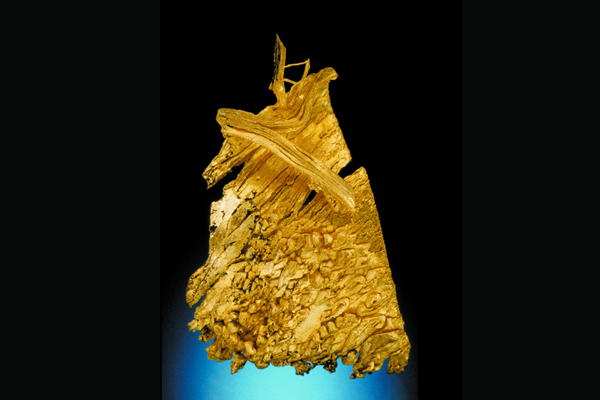 Figure 2, which includes the Genesis Mine, is part of a larger geologic map of the Carlin trend. As the map illustrates, the geology is complex. These rocks have been folded and overridden and broken by faults. Green and blue denote the predominant Paleozoic sedimentary rocks that host gold in this region. Light purple denotes other Paleozoic sedimentary rocks in the upper plate of a major thrust fault. In addition, local metamorphism occurred when Jurassic and Tertiary rocks intruded the Paleozoic rocks. Yellow areas marked “Tmc” and “Qls” indicate young Tertiary sedimentary rocks and a Quaternary landslide, respectively. The Genesis Mine area is marked on the right side of the map. 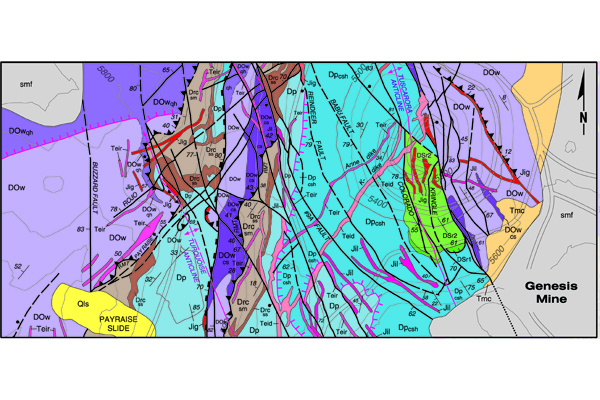 Geologic mapping of the sedimentary and igneous rocks indicates that gold deposits of the Carlin trend formed about the same time as the igneous activity that produced the northeast-trending dikes. Gold occurs in the Paleozoic rocks and also locally in the igneous rocks. Geologic mapping points to an origin of the gold deposits about 40 million years ago, considerably younger than most of the rocks in which the gold occurs. The mapped relationships between favorable host sedimentary rocks, mineralized dikes, and large fault structures have been important guides to gold exploration in this area.

Geologic maps have provided the key to finding new gold deposits in Nevada. Production from mines on the Carlin trend and similar deposits elsewhere in the Great Basin revived gold mining in the United States to unprecedented levels. These activities far exceed the booms of the ‘49ers on the Mother Lode in California and gold rushes of the late 1800s and early 1900s in both annual production and duration. We are currently in the midst of the biggest gold-mining boom in American history, a boom that provides tens of thousands of jobs, contributes billions of dollars to the U.S. economy, and helps to reduce the U.S. trade deficit. 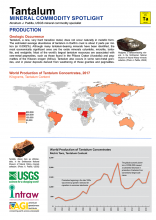