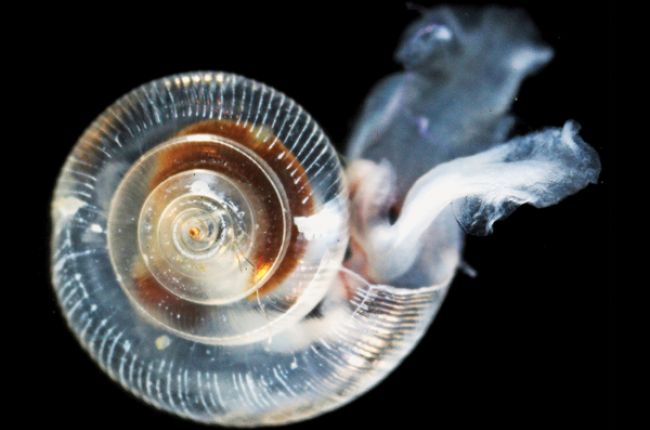 "Calcium carbonate minerals are the building blocks for the skeletons and shells of many marine organisms. In areas where most life now congregates in the ocean, the seawater is supersaturated with respect to calcium carbonate minerals. This means there are abundant building blocks for calcifying organisms to build their skeletons and shells. However, continued ocean acidification is causing many parts of the ocean to become undersaturated with these minerals, which is likely to affect the ability of some organisms to produce and maintain their shells."

"Ocean acidification is expected to impact ocean species to varying degrees. Photosynthetic algae and seagrasses may benefit from higher CO2 conditions in the ocean, as they require CO2 to live just like plants on land. On the other hand, studies have shown that a more acidic environment has a dramatic effect on some calcifying species, including oysters, clams, sea urchins, shallow water corals, deep sea corals, and calcareous plankton. When shelled organisms are at risk, the entire food web may also be at risk."

"In recent years, there have been near total failures of developing oysters in both aquaculture facilities and natural ecosystems on the West Coast. These larval oyster failures appear to be correlated with naturally occurring upwelling events that bring low pH waters undersaturated in aragonite as well as other water quality changes to nearshore environments. Lower pH values occur naturally on the West Coast during upwelling events, but recent observations indicate that anthropogenic CO2 is contributing to seasonal undersaturation. Low pH may be a factor in the current oyster reproductive failure; however, more research is needed to disentangle potential acidification effects from other risk factors, such as episodic freshwater inflow, pathogen increases, or low dissolved oxygen. It is premature to conclude that acidification is responsible for the recent oyster failures, but acidification is a potential factor in the current crisis to this $100 million a year industry, prompting new collaborations and accelerated research on ocean acidification and potential biological impacts."

"Pteropods are small snails that live as zooplankton in the water column, using their foot as wings to “fly” through the sea. They are an important prey species for many fish and marine mammals in high latitude ecosystems, including salmon and other fish, seabirds, and whales. Scientists at the Pacific Marine Environmental Laboratory and Northwest Fisheries Science Center have documented the sensitivity of pteropod shells to ocean acidification. These researchers have collected pteropods with partially dissolved shells from high CO2 locations along the U.S. West Coast and have confirmed the sensitivity of North Pacific pteropods to CO2 conditions in the laboratory."

"Increasing ocean acidification has been shown to significantly reduce the ability of reef-building corals to produce their skeletons. In a recent paper, coral biologists reported that ocean acidification could compromise the successful fertilization, larval settlement and survivorship of Elkhorn coral, an endangered species. These research results suggest that ocean acidification could severely impact the ability of coral reefs to recover from disturbance. Other research indicates that, by the end of this century, coral reefs may erode faster than they can be rebuilt. This could compromise the long-term viability of these ecosystems and perhaps impact the estimated one million species that depend on coral reef habitat."

What is ocean acidification?
National Oceanic and Atmospheric Administration