Choose an agency on the bar below to view AGI's analysis of the President's request for key geoscience-related agencies as well as detailed program and account information. Each of the appropriations pages provides a summary table, an overview of the budget request, and congressional action on the agency or department.

As in years past, AGI will provide testimony to several subcommittees on programs of importance to the geoscience community.

Within NSF, the proposed budgets for geoscience research and development (R&D) programs vary by $76 million between the House and Senate. The FY 2014 House appropriations bill provides $1.274 billion for Geosciences (GEO) R&D – 3.6 percent below FY 2012 actual levels – while the Senate bill allows for $1.35 billion for GEO R&D – an increase of 2.2 percent from FY 2012.

The House Committee on Appropriations published their fiscal year (FY) 2014 Interior, Environment and Related Agencies appropriations bill this July. The bill met with strong opposition from House Democrats, who lambasted cuts that zero out approximately 20 programs and slash 34% from the Environmental Protection Agency’s (EPA) budget. The bill proposes $24.3 billion in total funding; $5.5 billion below FY 2013 levels, or 18 percent decrease. The Interior, Environment and Related Agencies Subcommittee has jurisdiction over many agencies, including the U.S. Geological Survey (USGS), the Bureau of Land Management (BLM), the National Park Service (NPS),  and the President’s National Ocean Policy. The House bill includes $967 million for USGS,  $101 million, or 9.5%, below FY 2013 levels; $989.3 million for the BLM, $76 million (7%) below FY 2013 levels; $2.3 billion for NPS, 9% below FY 2013 levels; and forbids funding the National Ocean Policy. After a contentious, 5-hour markup of the House bill the Committee adjourned further discussion until after the August recess.

The Senate has yet to consider an appropriations bill for Interior, Environment and Related Agencies.

The House and Senate Appropriations committees released their non-emergency discretionary spending allocations for fiscal year (FY) 2014 this June. The Senate Appropriations Committee requested $1.058 trillion in non-emergency discretionary funds, while the House Appropriations Committee requested $967 billion. These bills authorize funding levels for all of the subcommittees, including the subcommittees on Commerce, Justice, Science; Energy and Water Development; and Interior and the Environment.

So far, the Appropriation Committees in each chamber have approved their own on Energy and Water Development appropriations bills, which vary by approximately $4.3 billion. The Senate allocated $34.7 billion to the subcommittee by a vote of 24-6, which will be reported to the full Senate for consideration. The House allocated $30.4 billion by a vote of 28-21, and will be reported to the full House for consideration. The Subcommittee on Energy and Water Development has jurisdiction over the Department of Energy (DOE), including the Energy Information Administration, the Federal Energy Regulatory Commission, and the DOE Office of Science. It also has jurisdiction over the Bureau of Reclamation in the Department of the Interior, and other related agencies.  The FY 2013 pre-sequester enacted levels for the Subcommittee on Energy and Water Development totaled $36.7 billion.

Appropriations Update for May 2013

Department of the Interior:
The May 7, 2013 hearing before the Subcommittee on Interior, Environment, and Related Agencies discussed the FY 2014 budget request for DOI of $10.9 billion, which represents an increase of nearly four percent from FY 2013 and $513 million from FY 2012 enacted levels. Additional requests include $48 million for BLM’s onshore oil and gas inspection program; $946 million for basic and applied science, such as research on White Nose Syndrome in bats and improving the use of GIS mapping; and $600 million for the Land and Water Conservation Fund (LWCF). Part of the LWCF is proposed to switch to mandatory rather than discretionary funds. Total offshore oil program funding would increase by nine percent under the FY 2014 proposed budget.

Senators questioned Secretary of the Interior Sally Jewell on the White Nose Syndrome in bats, Arctic-specific offshore oil and gas drilling regulations, DOI’s impending hydraulic fracturing rule, streamlining oil and gas permitting on public lands, the No Child Left Inside movement, the maturing DOI workforce, and the projected approval of an offshore wind lease in Rhode Island. Senator Tom Udall (D-NM) discussed proposed royalty and abandoned hard rock mine reclamation reforms to the General Mining Law of 1872 as well as the application of sequestration cuts to revenues that states receive under the Mineral Leasing Act of 1920. DOI officials noted that the Budget Control Act (P.L. 112-25) indicates mineral revenues are subject to sequestration.

The budget proposes increases for the Office of Energy Efficiency and Renewable Energy (EERE) of 55 percent or $995 million, and the Advanced Research Projects Agency-Energy (ARPA-E) of 43 percent or $114 million, which would fund an additional 100 projects. The Office of Fossil Energy budget has a proposed 21 percent or $113 million reduction due, in part, to the decrease in carbon storage activities.

Senators questioned Acting Secretary of Energy Daniel Poneman about proposals to sell the Tennessee Valley Authority (TVA), funds for plutonium waste clean up at Los Alamos National Lab, and the lack of information available regarding the cost, schedule, and scope baseline for the Institute of Electronics and Telecommunications of Rennes (IETR), especially given delays in construction of the high cost facility

The proposed budget would increase funding for the DOE Office of Science and the Office of Energy Efficiency and Renewable Energy, while continuing to decrease support for Fossil Energy R&D.

The President has requested a 9 percent increase for the USGS over FY 2012.

The Geosciences Directorate of NSF would receive a 5 percent increase over FY 2012 in the new budget.

NASA’s Earth Science program would see a 5 percent increase over FY 2012 levels in the FY 2014 budget, while Planetary Science programs would see major mission cuts to cover other facilities such as commercial spaceflight.

Appropriations Update for March 2013
The House and Senate passed the Consolidated and Further Continuing Appropriations Act, 2013 (H.R. 933) in March to fund the federal government through the end of fiscal year (FY) 2013. The President signed the bill on March 26. The budget process for FY 2014 is expected to pick up in April after the President releases his budget request on April 10.

H.R. 933 essentially maintains funding at FY 2012 levels for the rest of the fiscal year but subtracts $85 billion in required cuts as a result of sequestration. The sequester was first proposed in the Budget Control Act of 2011 (P.L. 112-25) and modified in the American Taxpayer Relief Act of 2012 (P.L. 112-240). Because Congress could not agree on a deficit reduction measure by March 1, mandated spending caps for discretionary accounts will be in place through FY 2021 though these could be modified through later congressional action.

Appropriations Update for February 2013
On March 1, 2013, the White House Office of Management and Budget (OMB) officially reduced the annual spending amounts of every non-defense discretionary account by approximately 5 percent and defense account by 8 percent. This across-the-board spending reduction, called the sequester or sequestration, was first proposed in 2011 as a penalty so severe it would force Congress to work together to solve the nation’s deficit woes. Unfortunately, no agreement on a package of replacement cuts or additional revenue was made in time to avoid the sequester. In early March, House Appropriations Chairman Hal Rogers (R-KY) introduced a spending bill (H.R. 933) to extend the current continuing resolution (CR) through September 2013 and provide appropriations for the Department of Defense and the Department of Veterans Affairs. The current CR expires March 27, 2013.

Because the sequestration occurred relatively late in the fiscal year, it will have the effect of an approximate 9 percent reduction on each non-defense discretionary account. OMB released a report to Congress providing calculations of the amounts and percentages by which certain accounts are required to be reduced. How exactly each agency or department will be affected by the sequester is still very unclear. The report to Congress includes the statement, “There is no requirement that sequestration be applied equally to each type of budgetary resource within a budget account. Section 256(k)(2) of [the Balanced Budget and Emergency Deficit Control Act (PL 99-177)]  requires that sequestration be applied equally at the program, project, and activity level within each budget account.” More details about how each department and agency enacts the required reductions will emerge in the coming months.

H.R. 933 would provide $982 billion across the government. This is the amount appropriated last year minus the $85 billion in across-the-board sequestration spending cuts that took place on March 1. It makes certain changes in domestic spending programs including about $600 million more for the Department of the Interior and the Department of Agriculture’s wildfire programs. H.R. 933 would direct that $802 million of the National Oceanic and Atmospheric Administration’s (NOAA) budget be spent on the Geostationary Operational Environmental Satellite R-system. Congress is scheduled to be on recess when the current CR expires. If  they do not change their schedule, they will have to vote on H.R. 933 or another spending bill by March 22 to avoid a government shutdown.

Appropriations Update for January 2013
In January 2013, Congress passed the American Taxpayer Relief Act of 2012 (ATRA, P.L. 112-240) to delay the sequestration, or automatic, across-the-board spending cuts, for two months and passed a measure to temporarily suspend the borrowing limit (the “debt ceiling”) until May 19. The debt ceiling bill, called the No Budget, No Pay Act (H.R. 325), would also suspend pay for members of Congress if they do not pass a budget resolution for fiscal year (FY) 2014 by April 15, 2013.

Even though Congress delayed the vote to raise the debt ceiling until mid-May, they still have two big budget deadlines approaching in March. The first is the sequestration due to take effect on March 1 and the second is the expiration of the current continuing resolution (CR, H.J. Res 117) for FY 2013 on March 27. The upcoming deadlines will likely be tied to deficit reduction efforts meaning further cuts to discretionary spending, including geoscience research and development (R&D), are possible.

AGI encourages all geoscientists to contact their members of Congress and ask them to avoid the sequestration and find a balanced approach to deficit reduction. Geoscience R&D and non-defense discretionary spending account for less than 20 percent of the federal budget and have already absorbed significant reductions over the next decade under the BCA spending caps and other measures. Increasing cuts to these vital R&D programs would mean fewer research grants, fewer student research opportunities, and fewer jobs.

Below is a diagram of the congressional budget process that first appeared in Following the Budget Process that was published in the March 1996 issue of Geotimes. It is adapted from a diagram developed by the House Budget Committee. Click on the image to open a PDF version. 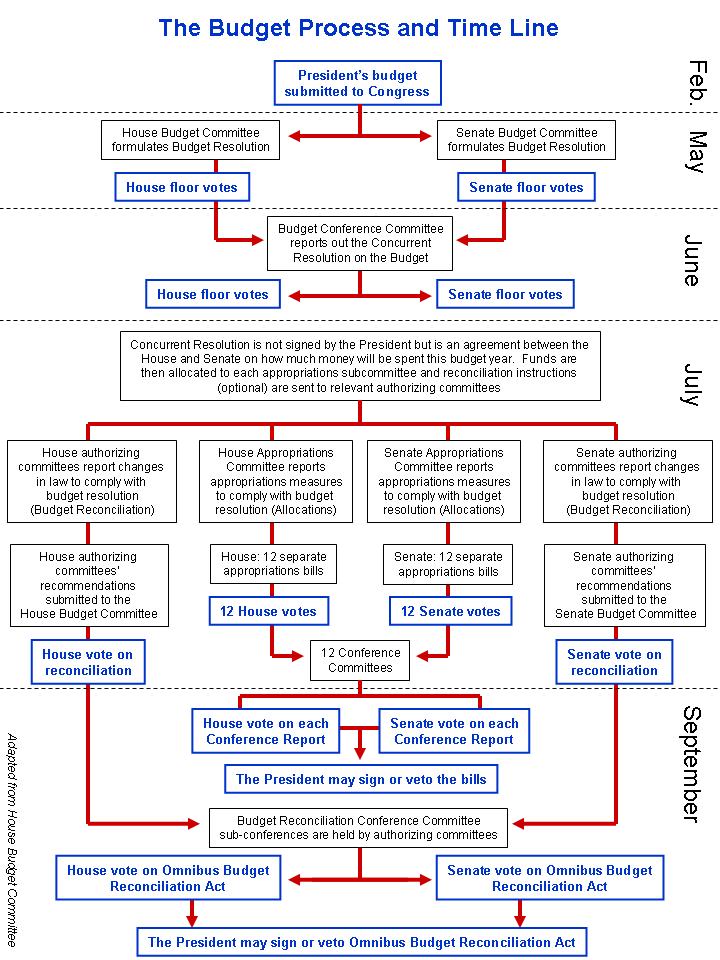 Please send any comments or requests for information to the AGI Geoscience Policy at govt@agiweb.org.