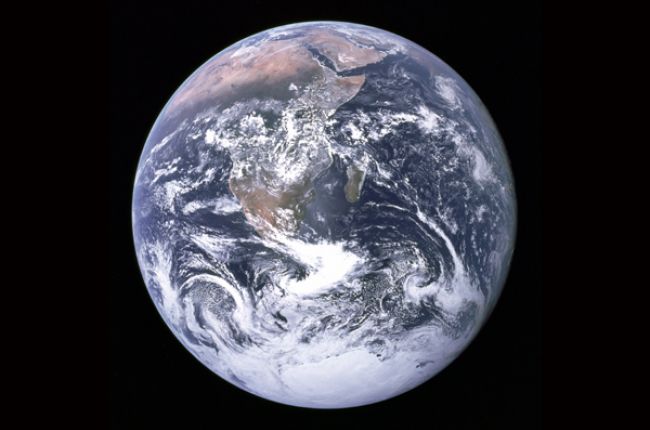 Climate is the average of weather conditions over at least 30 years.1,2 Geoscientists monitor modern climate conditions (1880 A.D. to present) by taking direct measurements of weather data (i.e., air temperature, rainfall and snowfall, wind speed, cloudiness, and so on) and averaging those over at least a 30 year period.1-3 Because climate conditions affect –and are affected by –other parts of the Earth system, additional aspects of the Earth system such as ocean temperatures, sea level, glacier size, and much more are also tracked to gain a better understanding of how climate interacts with the geosphere.3 Geoscientists also estimate changes in past climate –before direct measurements were possible –from records like tree rings, ice cores, lake and marine sediment cores, and fossils.4,5 Through analysis of many independent types of data, comparisons with past climate records, and climate computer model simulations, geoscientists have concluded that climate is currently changing towards warmer conditions globally.

How is climate monitored?

Earth’s climate can be thought of as a large, interrelated system with three main parts –the ocean, landmasses, and atmosphere –that affect each other, even from far away. Put another way, a change in one part of the Earth system can exert a strong influence on one or more aspects of the Earth’s climate; for an example on a shorter timescale, very warm ocean temperatures in the tropical Pacific Ocean can influence rainfall patterns around the world during El Niño events. Because Earth’s climate system is large and complex, geoscientists monitor the state of the Earth’s ocean, land, and atmosphere with many types of instruments, including weather stations on land, buoys in the ocean, weather balloons in the atmosphere, and satellites.3 They measure many direct and indirect aspects of Earth’s atmosphere, land and oceans, such as temperature, precipitation, ocean salinity, atmospheric greenhouse gas concentrations, growing season length, soil moisture, snow and ice cover, sea ice extent, and even ocean currents, among many other factors.3 By averaging this information over periods of 30 years or more, scientists can see if the climate is changing, and how the different parts of Earth’s systems interact with, influence, and are influenced by the Earth’s climate.6

Geoscientists can also estimate the state of Earth’s climate for times before direct measurements were recorded.4,5 Geoscientists use a variety of types of geologic “records” –such as tree rings, the chemical composition of ice cores, glacier size, presence of certain plants and animals (deduced from fossils and pollen), ocean chemistry, lake levels, and others –and knowledge of the present-day relationships of those records to temperature, rainfall, and other aspects of Earth’s climate in order to estimate past climatic conditions.4 For example, trees tend to grow very wide rings in warmer, wetter years, and thinner rings in colder, drier years. Using modern measurements, geoscientists have developed mathematical relationships that link tree ring width to temperature and precipitation, and so are able to infer what past climate was like where each tree grew.7,8 By comparing many types of past climate records from different areas with each other, geoscientists can estimate past changes in climate over specific regions or even the entire planet, and better understand how Earth’s climate system works over time.4,5,7,8

What are the influences on present-day climate change?

By combining direct observations and reconstructions of past climate changes, geoscientists have been able to understand the many natural influences that play a role in Earth’s climate, including solar (sun) variability, reflectivity of the Earth, aspects of Earth’s orbit around the sun, volcanism, ocean temperatures and currents, greenhouse gas concentrations, and more.8-11 Records from Earth's geologic history show that the climate has changed both gradually and abruptly in the past three million years as Earth has experienced alternating ice ages and warmer periods.9-11 Geologic records also indicate that global temperatures and the concentrations of greenhouse gases in the atmosphere have been strongly correlated over the last 800,000 years.9,10 Temperatures have generally risen as the concentration of greenhouse gases have increased, with the sharpest increases in both greenhouse gases and temperatures occurring in the past 150 years.9-13 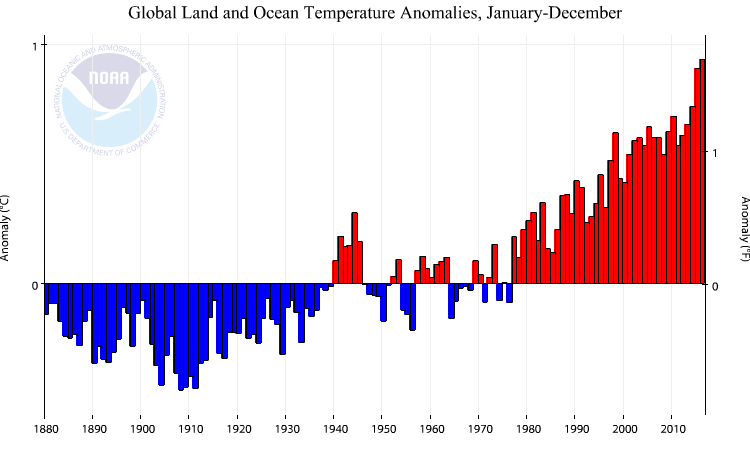 Observations have shown that global surface temperatures have increased more than 1.5℉ (0.8℃) on average since 1880, with both land and the surface ocean showing increasing temperatures, particularly since the 1970’s (see Figure 1 above).8,12-16 In the United States, annual average surface temperatures have risen 1.3℉ to 1.9℉ since 1895.16 Over 80% of observed warming since the 1970’s has occurred in the ocean, which has a high capacity to both store and release heat.14,15 The increase in global average temperature since the 19th century is mirrored by increasing atmospheric carbon dioxide concentrations over the same period of time.8,11,15 Average monthly global atmospheric carbon dioxide concentrations exceeded 405 parts per million as of February 2017;17 to put this in context, this value is approximately 45% (over 100 parts per million) higher than at any other warm period in the last 400,000 years.10

Natural processes strongly affect Earth’s climate (this is partly why the trend in Figure 1 above is not a smooth one), but there is evidence that greenhouse gas emissions from humans, combined with other human activities such as land-use changes, are linked to the rapid warming that has been observed since the middle of the 20th century.8,11-16,18-20 The ten warmest years since record-keeping began in 1880 have occurred since the early 2000s, and average global temperatures are expected to increase at least 2℉, and perhaps by as much as 11℉, over the next century, along with many other changes in the Earth system.8,14,21,22 Geoscientists closely monitor the climate in order to track trends over time and to predict future changes.

What is ocean acidification?
National Oceanic and Atmospheric Administration