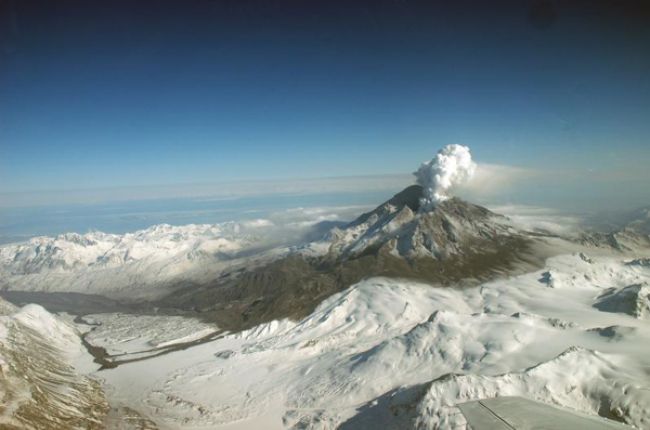 "The world’s busy air traffic corridors pass over or downwind of hundreds of volcanoes capable of hazardous explosive eruptions. The risk to aviation from volcanic activity is significant—in the United States alone, aircraft carry about 300,000 passengers and hundreds of millions of dollars of cargo near active volcanoes each day. Costly disruption of flight operations in Europe and North America in 2010 in the wake of a moderate-size eruption in Iceland clearly demonstrates how eruptions can have global impacts on the aviation industry. Airborne volcanic ash can be a serious hazard to aviation even hundreds of miles from an eruption. Encounters with high-concentration ash clouds can diminish visibility, damage flight control systems, and cause jet engines to fail. Encounters with low concentration clouds of volcanic ash and aerosols can accelerate wear on engine and aircraft components, resulting in premature replacement. The U.S. Geological Survey (USGS), in cooperation with national and international partners, is playing a leading role in the international effort to reduce the risk posed to aircraft by volcanic eruptions.
Volcanic eruptions pose a serious hazard to aviation when highly abrasive, pulverized rock debris (ash) and gas are ejected explosively into the atmosphere and dispersed over long distances. Worldwide, more than 100 reported encounters of aircraft with volcanic ash have resulted in hundreds of millions of dollars in damage and, in three dramatic cases, caused the near loss of wide-body passenger jets. For aircraft to avoid encounters with volcanic ash, air traffic controllers, pilots, and dispatchers must be rapidly notified when explosive eruptions occur and ash is in the atmosphere.
Hundreds of active volcanoes around the globe have the potential to severely affect aviation operations, and each year dozens of these volcanoes erupt explosively. On a global basis, volcanic ash is a daily concern to aviation. Volcanic ash clouds are carried by prevailing winds and can drift in different directions at many flight levels for thousands of miles from the erupting volcano. The hazard is complicated by the fact that ash and aerosol clouds from volcanoes can remain aloft at cruise altitudes for days to weeks. These clouds are difficult to distinguish visually from weather clouds and are invisible to air traffic control and aircraft radar. Volcanic activity can also have serious impacts on low altitude aircraft and on airport operations.
Volcanic ash consists of small (less than 2 mm or 0.08 inch across) solid, sharp-edged fragments of quickly cooled volcanic glass and minerals blasted at high velocity into the atmosphere during explosive eruptions. This material is abrasive and melts at the high operating temperatures of modern jet engines. When ingested into a jet engine, volcanic ash erodes turbine blades, and the melted ash can adhere to critical parts, causing engine failure (“flameout”). Any forward-facing surface of an airplane engulfed in a volcanic ash cloud is likely to be eroded, including the cockpit and forward cabin windows and landing-light covers. Cockpit windows may become so abraded that pilots have a serious loss of forward visibility. Ash entering sensitive aircraft electronics can interfere with navigation and other onboard systems. As a result of electrical disturbances within the ash cloud, a flight crew may also lose the ability to transmit a distress call.
Volcanic ash and aerosol clouds above airports and ash falling on and near airports can be hazardous to aircraft on approach and departure, as well as to operations on the ground. Ash on runways reduces braking effectiveness of aircraft, and wet ash is extremely slippery. The fine particles can be re-suspended by surface winds and airport ground operations until removed from the tarmac, an expensive and difficult process. When an airport is closed or operations curtailed because of the presence of ash, significant and costly disruptions result, including the loss of required alternate landing sites for aircraft aloft. This is particularly a concern for twin-engine aircraft operating under ETOPS (Extended-range Twin-engine Operational Performance Standards) flight rules on oceanic flights."

What kinds of hazards are associated with volcanic eruptions?
American Geosciences Institute

Why is it important to monitor volcanoes?
U.S. Geological Survey