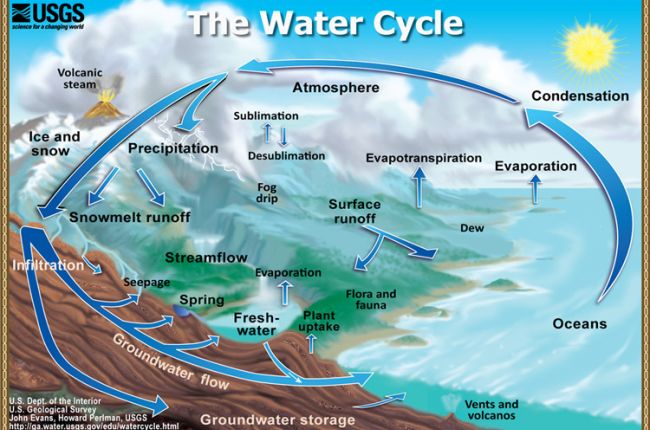 Water exists at the Earth's surface as liquid, solid, and vapor. It is forever changing from one of those three states to another. You can easily observe how water changes from liquid to solid by freezing and from solid to liquid by melting. Water also changes from liquid to vapor by evaporation and from vapor to liquid by condensation. Condensation is how clouds and raindrops form. Water can even change from vapor directly into solid; that is how snowflakes are formed, high in the atmosphere.

The total amount of water near the surface of the Earth stays almost the same through time, but water is always moving from place to place. You can think of places where water resides, like the ocean or lakes or glaciers, as “reservoirs.” Water moves from reservoir to reservoir in various ways. It can move in the form of liquid, solid, or vapor. This complicated movement of the Earth's water is called the water cycle.

One of the most important “loops” in the water cycle involves evaporation of water from the ocean surface, transport in the form of water vapor to the continents by winds, and precipitation as rain or snow on the continents. The rainfall then runs off by way of streams, rivers, and groundwater back to the ocean. You modeled a similar loop with your distillation set up. Another important “loop” in the water cycle involves condensation of water vapor in the atmosphere to form rain, soaking of the rain into the ground, uptake of the water by plant roots, and return of that water, in the form of water vapor, back into the atmosphere by transpiration through the leaves of the plants. There are many other “loops” as well. The Earth's water cycle is very complicated in its details.