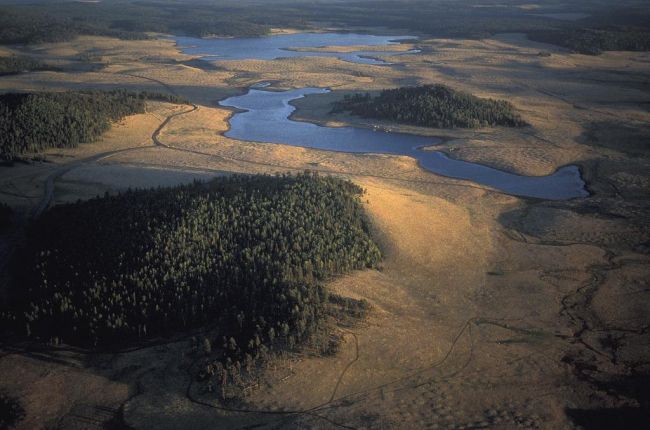 In most parts of the world, water is a scarce resource. That might seem strange, because there is so much water on Earth. Almost all of the water on Earth, more than 97 percent of it, is seawater in the oceans. The rest is called fresh water, because it does not have a high salt content. Most of the world’s fresh water is frozen solid in large glaciers in Antarctica and Greenland. Almost all of the fresh water that is available for human use is either contained in soil and rock below the surface, called groundwater, or in rivers and lakes. 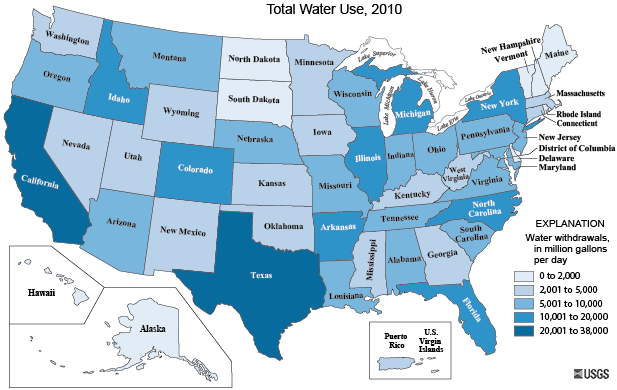 In most areas of the United States there is enough fresh water for human use. Yet usable fresh water is not as abundant as you might think. In some areas, like the arid Southwest, there is not enough water. In those areas, water has to be transported long distances from other places in human-made channels called aqueducts. Even in areas with plenty of fresh water, there are sometimes shortages. Rainfall is the only way that water supplies are replenished. During times of drought, when rainfall is below average for a number of years, water supplies can become dangerously low. Even when rainfall is adequate, water from rivers and lakes might be unusable because of pollution. In some areas, groundwater cannot be used because when it is removed from the ground, nearby wetlands would be damaged by drying up. As the population of the United States continues to grow in the future, water shortages will become more common, because the supply of available water remains the same. Water conservation will become more and more important as time goes on.

People use water in many ways at home: drinking, cooking, bathing, brushing teeth, washing clothes, dishes, and cars, flushing toilets, watering gardens and lawns, and filling swimming pools. Most people do not think much about how much water they use. Perhaps this is partly because they don’t pay for it each time they use it, except when they buy bottled water.

There are many ways to conserve water in homes. Some are easier than others. Leaky faucets and leaky toilets waste very large amounts of water, because even though the flow rates are small, they leak all the time. New designs of toilets and washing machines use much less water than older designs, but replacement is expensive. Water-saving shower heads save a lot of water, and they are relatively easy and inexpensive to replace. The most effective ways to reduce water use, however, might be the most difficult. Taking “navy showers” (turning off the water while you’re soaping yourself), not planting lavish lawns in areas that are normally arid, and not washing cars so often are examples of effective and simple ways to conserve water.