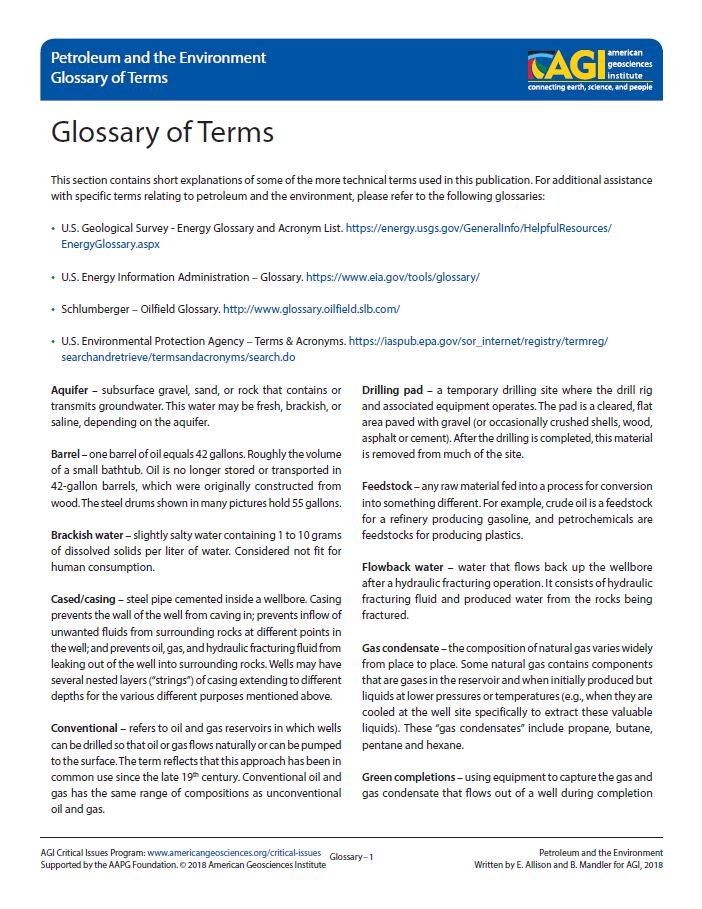 This section contains short explanations of some of the more technical terms used in Petroleum and the Environment (2018). For additional assistance with specific terms relating to petroleum and the environment, please refer to the following glossaries:

Aquifer – subsurface gravel, sand, or rock that contains or transmits groundwater. This water may be fresh, brackish, or saline, depending on the aquifer.

Barrel – one barrel of oil equals 42 gallons. Roughly the volume of a small bathtub. Oil is no longer stored or transported in 42-gallon barrels, which were originally constructed from wood. The steel drums shown in many pictures hold 55 gallons.

Cased/casing –steel pipe cemented inside a wellbore. Casing prevents the wall of the well from caving in; prevents inflow of unwanted fluids from surrounding rocks at different points in the well; and prevents oil, gas, and hydraulic fracturing fluid from leaking out of the well into surrounding rocks. Wells may have several nested layers (“strings”) of casing extending to different depths for the various different purposes mentioned above.

Drilling pad – a temporary drilling site where the drill rig and associated equipment operates. The pad is a cleared, flat area paved with gravel (or occasionally crushed shells, wood, asphalt or cement). After the drilling is completed, this material is removed from much of the site.

Feedstock – any raw material fed into a process for conversion into something different. For example, crude oil is a feedstock for a refinery producing gasoline, and petrochemicals are feedstocks for producing plastics.

Gas condensate – the composition of natural gas varies widely from place to place. Some natural gas contains components that are gases in the reservoir and when initially produced but liquids at lower pressures or temperatures (e.g., when they are cooled at the well site specifically to extract these valuable liquids). These “gas condensates” include propane, butane, pentane and hexane.

Green completions – using equipment to capture the gas and gas condensate that flows out of a well during completion operations. Captured gas and condensate can then be sold instead of being flared or vented to the atmosphere.

Hydraulic fracturing – a technique used to increase the flow of oil and/or gas out of rocks by creating additional fractures for oil and/or gas to flow through and into a wellbore. This is achieved by injecting fluid into the wellbore at very high pressures, causing the surrounding rocks to crack, which increases the number and size of flow paths into the wellbore. The injected fluid is typically water with added chemicals to improve performance and grains (commonly sand) that hold open the newly created fractures. Hydraulic fracturing has been performed since the 1940s in vertical and then slanted wells, but today is most commonly associated with horizontal drilling of shales and other low-permeability rocks.

Lease – In the oil and gas industry, leases are provided by government or private owners of mineral rights (land ownership may or may not include ownership of underlying resources) to companies, allowing them to explore for and produce oil and/or natural gas under certain conditions.

LIDAR – a remote sensing method (Light Detection and Ranging) that uses light from a pulsed laser to measure distances from the measuring system to an object or surface. In geoscience applications, LIDAR is commonly used to obtain precise information about land elevation or seafloor features.

Natural gas liquids – Chemical compounds found in natural gas that are heavier than methane. The most common natural gas liquids (ethane and propane) are only liquid under high pressure (underground or when pressurized in tanks) and become gases at atmospheric pressure. Other substances commonly grouped as NGLs include naphtha, natural gasoline, and gas condensates.

Organic compound – a large class of chemicals in which one or more carbon atoms are linked to other elements, most commonly hydrogen, oxygen or nitrogen. Hydrocarbons – a subset of organic compounds consisting only of carbon and hydrogen – make up the majority of oil and gas by volume.

Orphaned well – a well that does not have any legally responsible or financially able party to deal with its plugging, abandonment, and reclamation responsibilities.

Permeability – the extent to which a material allows fluids to pass through it.

Petroleum – has slightly different meanings in different contexts, but generally refers to all naturally occurring hydrocarbon mixtures, including crude oil and natural gas. In some classifications, “petroleum” refers only to the liquid components of oil and gas, and may or may not include refined products such as gasoline. For the purpose of this series, “petroleum” is used as a general term to refer to oil and gas, while “refined products”, “petrochemicals”, and other, more specific terms are used to describe the fuels and materials derived from oil and gas.

Play – a group of related oil fields in the same area.

Produced water – water that is produced as a byproduct along with oil and/or gas. Many oil or gas reservoirs contain water either in the oil or gas reservoir or in a zone underlying the reservoir. The water composition varies regionally, from almost fresh to many times saltier than seawater.

Reserves – the quantities of oil or natural gas that are anticipated to be commercially recoverable from known sources. In discussions of availability, “reserves” are different from “resources,” which are estimated to be potentially recoverable.

Reservoir – in the oil and gas industry, “reservoir” generally refers to a localized concentration of rocks that are rich in oil and/or gas.

Saline water – water containing a high concentration of dissolved salts. Saline water is saltier than brackish water, containing greater than 1% (or 10 grams per liter) of dissolve salts, and is considered non-potable unless treated (desalinated) to remove the salts. Seawater has a salinity of 3.5%; saline groundwater may have significantly higher salt contents.

Shale – a fine-grained sedimentary rock that forms from the compaction of mud. Shale is made up of many thin layers. Shales containing organic material are commonly the source of oil and natural gas.

Subsidence – the gradual or sudden settling or sinking of the Earth’s surface. Subsidence is often caused by the removal of water, oil, gas, coal, or mineral resources from the ground. Subsidence may also be caused by natural processes such as earthquakes, sediment compaction, or movement of surface landmasses along faults.

Subsurface – anything below the surface of the Earth. Synonyms: underground, subterranean.

Unconventional – a loosely defined term referring to oil and gas extracted from difficult-to-produce reservoirs using newer, often complex or expensive techniques. In the U.S., most unconventional oil and gas is produced from low-permeability or “tight” shale or sandstone formations using horizontal wells and hydraulic fracturing.

Wellbore – a hole drilled into the Earth to aid in the exploration and recovery of natural resources including gas, oil, or water.

Well completion – the process of making a well ready for production. This commonly includes pumping clean fluid into the well to remove the drilling mud or residue from other treatments, perforating the well casing next to the oil-/gas-producing zone, injecting acids to remove drilling-mud residue or widen existing cracks, hydraulically fracturing the producing zone, and installing production tubing and pumps in the well.