Identifying and mitigating contamination of groundwater from oil and gas activity

The United States relies on groundwater for roughly 25% of its fresh water.1 This groundwater is found in porous, permeable rocks (aquifers) that often lie close to the Earth’s surface – the deepest freshwater aquifers are found more than 6,000 feet underground,2 but most are much shallower, from near the land surface to a few hundred feet below the surface.3 In contrast, many of the largest oil and gas deposits are deeply buried many thousands of feet below the Earth’s surface. As a result, oil and gas production involves drilling through aquifers to access the oil and gas farther below. Groundwater protection techniques have long played a crucial role in protecting environmental and human health during oil and gas production. More recently, oil and gas operations, particularly hydraulic fracturing, have raised concerns about the potential for aquifers to be contaminated by methane, produced water, or hydraulic fracturing fluid. This has led to more extensive research into the mechanisms, likelihood, and prevention of groundwater contamination. 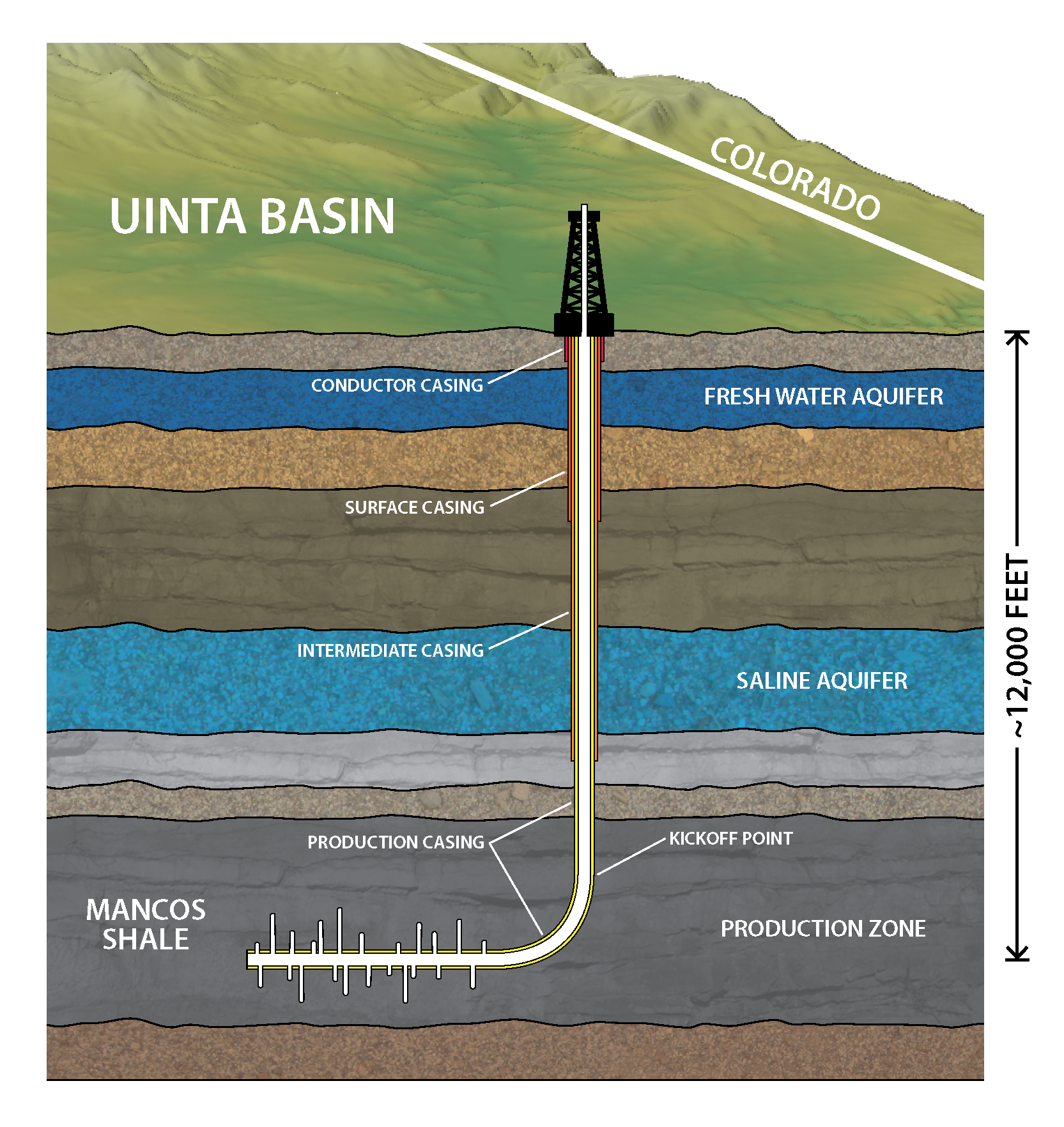 Schematic cross-section of a hydraulically fractured gas well in the Uinta Basin, Utah. The spatial relationships between the producing shale and overlying aquifers shown here are common for many, but not all, shales: operators must drill through fresh water aquifers to access the shales far beneath. Steel “casing” pipes are used to prevent the transfer of fluids between the well and the aquifer being drilled through. Hydraulically generated fractures in the shale may extend upwards for hundreds to more than 1,000 feet, but in most cases this still leaves thousands of feet of undisturbed rock between the hydraulic fractures and fresh groundwater. Image credit: Courtesy of the Utah Geological Survey.4

Drilling fluids – used to lubricate drills, remove rock chips, and maintain pressure in the well during drilling, usually consist mostly of mud and water with smaller amounts of minerals and chemicals that change the physical properties of the fluid to improve its function. Most of the substances in drilling fluids are not harmful to humans, and states typically impose restrictions on additives that can be used when drilling through freshwater aquifers. However, there have been rare cases in which unauthorized use of drilling fluid additives while drilling through freshwater aquifers has been found to contaminate groundwater.7

Methane – methane is a naturally occurring, flammable gas that is non-toxic but explosive at high concentrations. It is also a potent greenhouse gas. Methane is the main component of natural gas but it is also produced by microbes in sediments and wetlands, so methane found in groundwater may come from nearby oil and gas operations, natural microbes, both.8 Methane can also enter groundwater due to natural leakage from coal or gas-rich rocks. Determining the contributions of these different methane sources is a crucial step in assessing the environmental impacts of oil and gas production.

Oil and produced water – any fluid that can enter a well also has the potential to leak out of it if the well is compromised. This may include natural gas (see above), oil, or the often salty water that coexists with oil and gas in many rocks (called “produced water” when it is extracted along with oil and gas). Oil and saltwater leaks are rare but are of greater risk in improperly abandoned or “orphaned” wells than in active ones.9

There are three main ways in which oil and gas wells may contaminate groundwater: (1) if a well leaks (see “Preventing Well Leaks”, below), (2) if oil or other fluids are spilled at the surface (see “Spills in Oil and Natural Gas Fields” in this series), or (3) if a hydraulic fracturing operation generates cracks in the overlying rocks it is theoretically possible for fluids and/or gas to move up through the rocks and into an aquifer.

The horizontal and vertical extents of hydraulically generated fractures are often determined during the fracturing process. Studies of thousands of hydraulic fracturing operations in the Barnett Shale (Texas) and the Marcellus Shale (Ohio, Pennsylvania, and West Virginia) have found that hydraulic fracturing operations took place more than 3,000 feet below any aquifers, and that the fractures generated during these operations generally extended upwards for only a few hundred feet.11 A few fractures extended more than 1,000 feet, but in all cases there were still thousands of feet between the maximum extent of the fractures and the freshwater aquifers. Hydraulic fracturing for oil and gas in most areas therefore does not appear to generate fractures that allow for the migration of hazardous chemicals into freshwater aquifers. However, developing a complete understanding of these processes is an ongoing endeavor, and a procedure that is safe in one area or at one well may present risks in another.

Are hydraulic fracturing and/or leaking wells responsible for the contamination (primarily by methane) observed in some aquifers? This question has been extensively studied, debated, and litigated in a number of major oil- and gas-producing areas,12 including Pavillion, Wyoming;13 Dimock, Pennsylvania;14 and Parker County, Texas.15 In many cases, water quality samples were not collected prior to hydraulic fracturing, making it difficult to establish whether or not the aquifer contamination is related to hydraulic fracturing, earlier oil and gas production, or natural seepage. Most states now require (and many companies choose to conduct) pre-drilling testing of domestic and public water supplies so that the source of any future contamination can be more reliably identified. 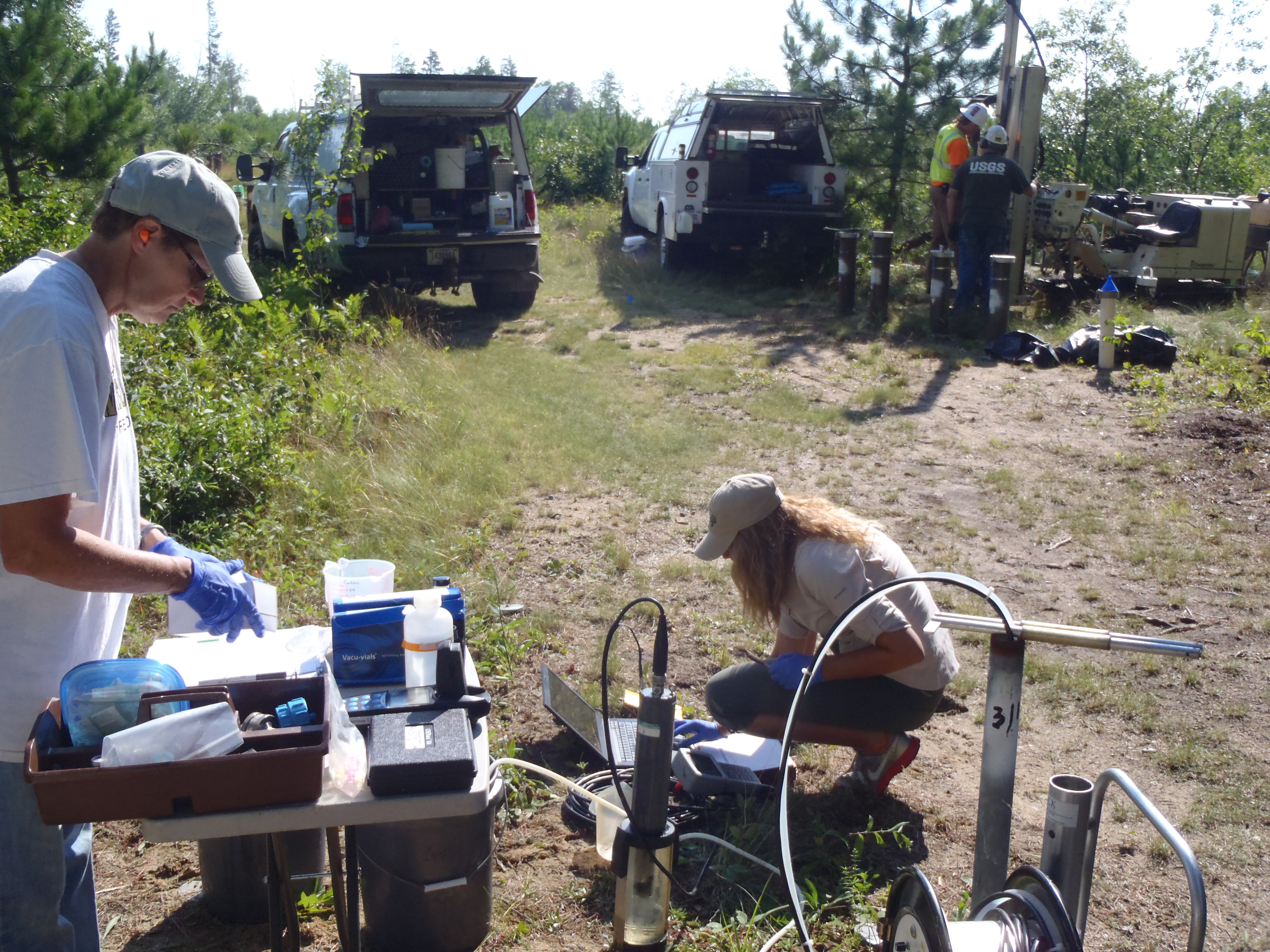 One of the main ways in which groundwater contamination may result from oil and gas activity is if fluids spilled on the surface seep down into groundwater. Above: the area affected by the 1979 pipeline spill in Bemidji, Minnesota, is now managed by the U.S. Geological Survey (USGS), which conducts research into the long-term effects of major spills. In this picture, USGS scientists are collecting a groundwater sample from a well to monitor how the different components of crude oil that has contaminated groundwater are broken down over time by biological activity. Image credit: U.S. Geological Survey.10

Oil and gas wells are constructed with multiple steel pipes (“casings”) and cement barriers to prevent leaks of oil, water, or gas into aquifers. Casing and cement also prevent contamination of the well itself by material from the surrounding rock formations. An oil or gas well can leak if the steel casing or cement are damaged or poorly constructed. This is true of all wells, old and new, whether or not they are hydraulically fractured. The U.S. Environmental Protection Agency (EPA) has found that the hydraulic fracturing process itself is not a major contributor to well leaks from oil and gas operations.12 More recent analyses have supported this finding, while also noting that surface spills are more common due to the large amounts of various different fluids being handled at and near the well site16 (see “Spills in Oil and Natural Gas Fields” in this series for more information).

Federal or state regulators specify the depth of casing and cement layers based on local geology, depth of any freshwater aquifers, and contamination risk. Some oil- and gas-producing states, such as Pennsylvania, have updated their well casing and cementing regulations since 2008 to reduce the risk of leaks into aquifers.17 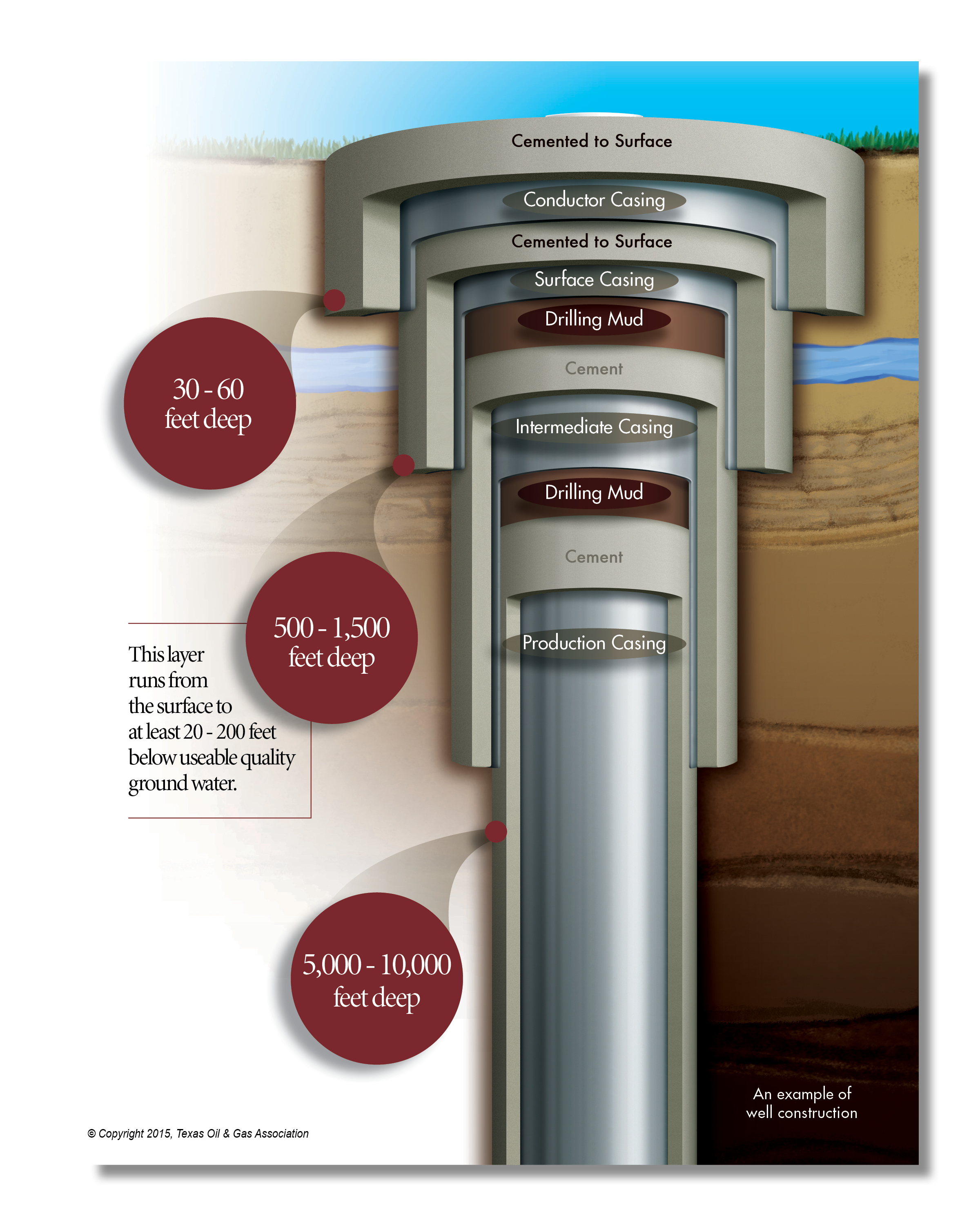 Several layers of steel casing and cement are used to prevent leaks out of or into an oil or gas well. Image not to scale. Image credit: Courtesy of Texas Oil and Gas Association.

Examples of Methane Leaks from Wells

Although methane is often naturally present in aquifers, leaks from oil and gas wells are possible and may include other, more hazardous chemicals. A variety of attempts have been made to determine the number and causes of these leaks:

In oil- and gas-producing areas, the presence of methane in aquifers can cause significant local concern over the safety of oil and gas operations. In many cases, however, methane is naturally present in the local rocks and soil: