Methane is the main component of natural gas, a cheap, abundant, and versatile source of energy that produces less carbon dioxide than other fossil fuels when burned. However, methane itself is a more potent greenhouse gas than carbon dioxide. Methane leaks from wells, pipelines, or processing equipment can substantially increase the greenhouse gas emissions of the natural gas sector, while also wasting resources as methane escapes into the atmosphere.

Methane may be produced in two ways. Thermogenic methane, the source of most natural gas reserves, is produced by the effects of heat and pressure on the deeply buried remains of marine microorganisms, and usually occurs with oil. Biogenic methane is produced by microbes in the stomachs of cows, sheep, goats, and other ruminant animals (known as enteric fermentation), and in manure, shallow coal and oil deposits, and wetlands. Identifying whether a methane source is thermogenic or biogenic is crucial for determining the methane emissions from oil and gas operations. This section of Petroleum and the Environment focuses on quantifying emissions of methane into the atmosphere; other parts of this series cover efforts to reduce methane emissions (“Mitigating and Regulating Methane Emissions”), and issues of methane in groundwater (“Groundwater Protection in Oil and Gas Production”). 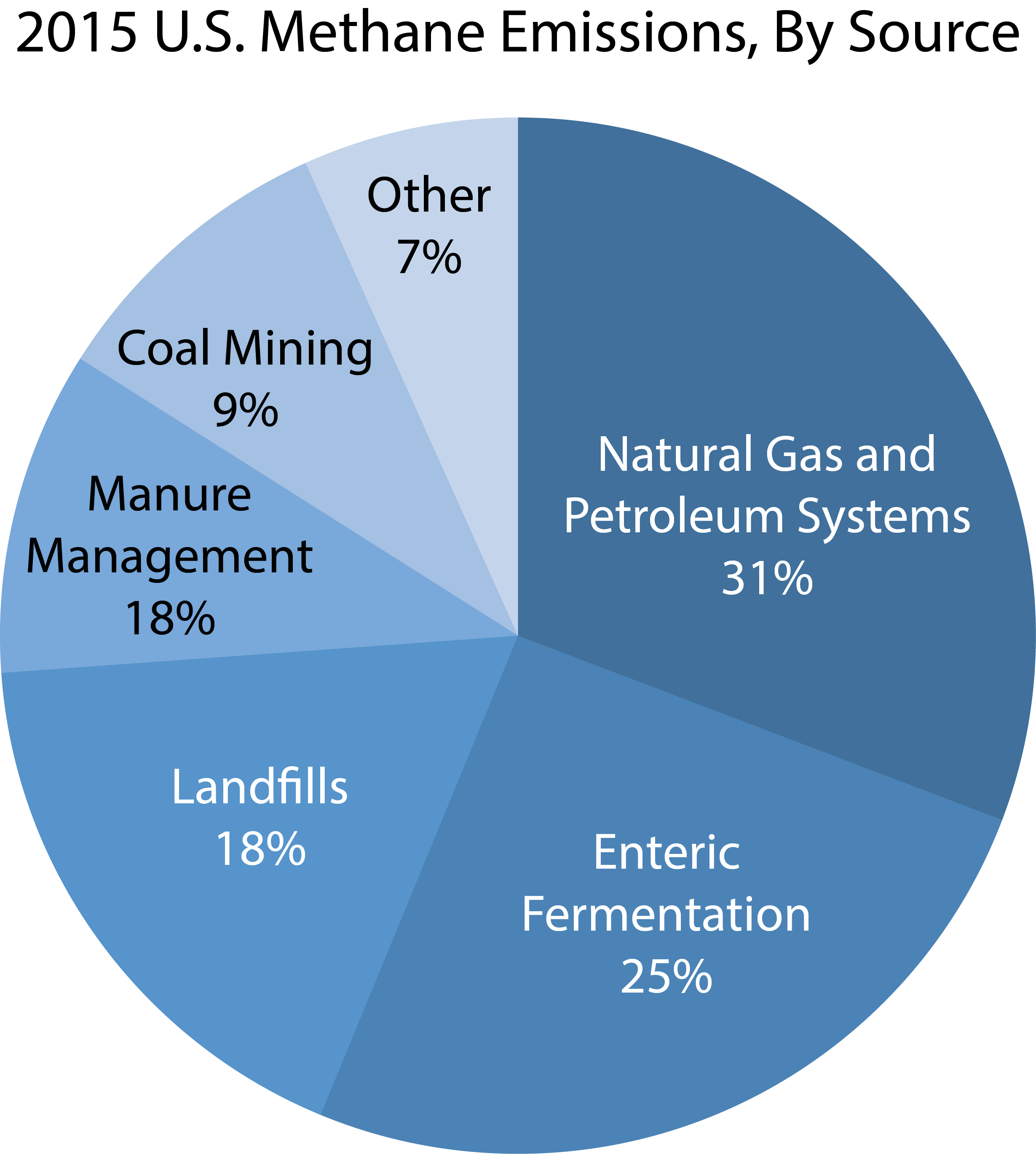 Determining the relative methane emissions from different sources is very difficult. The majority of methane emissions come from several vast industries that often operate right next to each other (agriculture, oil and gas, mining, and waste management). Leaks can be short-lived or prolonged, and emission rates from agriculture and landfills change over time. So although atmospheric methane levels can be measured very accurately, there is a great deal of uncertainty in the overall proportion of emissions coming from different human activities. The national numbers in this sheet are best available estimates but may not be fully accurate.

Since the early 1990s, the U.S. Environmental Protection Agency (EPA) has annually released the U.S. Greenhouse Gas Inventory4 as part of U.S. reporting to the United Nations in accordance with the Framework Convention on Climate Change.6 The inventory is based on emissions reports from more than 8,000 industrial, manufacturing, and oil and gas facilities; power plants; and landfills.7 These reports represent only about half of all U.S. greenhouse gas emissions, resulting in large uncertainties in emissions volumes.

The oil and natural gas system is one of the most complex sources for emissions estimates because of the number of emission sources, their technical complexity, and the variability between different facilities.8,9 Similar facilities may report different emissions,8 and emission volumes may change over time as new leaks arise and are detected and repaired.10

Reflecting this complexity, the EPA estimate of the overall methane leak rate from the U.S. natural gas system has changed over time as new information has become available.11 For example, between 2010 and 2011, the EPA’s leak estimate for the year 2008 was updated from 96 to 212 million metric tons of carbon dioxide-equivalent; in 2013 this was then revised down to 163 million metric tons.13 Estimates have not varied as widely from 2014 to 2017, but there remains considerable uncertainty in these figures. 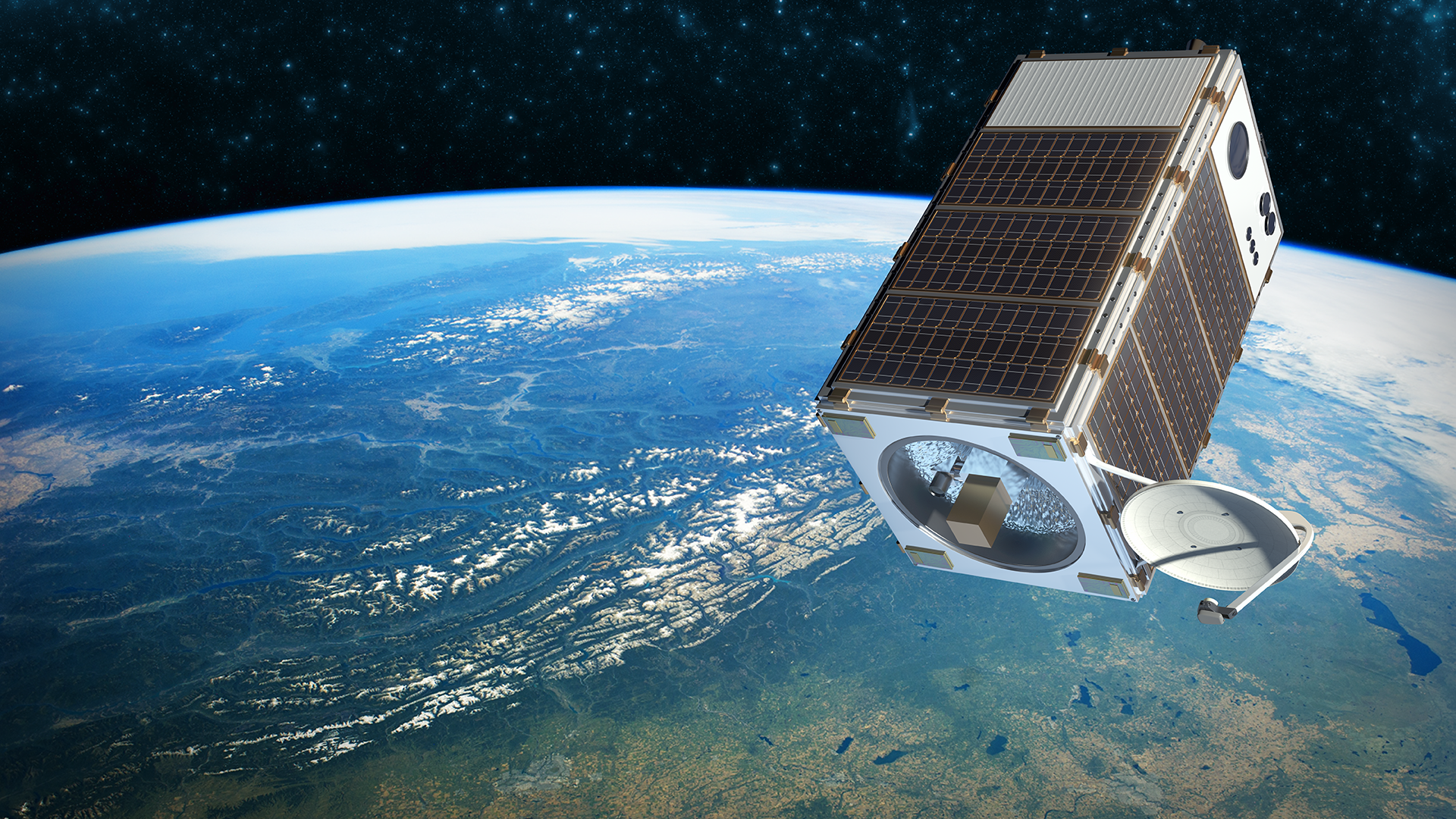 Improvements in remote sensing technologies are allowing increasingly high-precision measurements of regional methane emissions from plane-mounted sensors and even satellites. MethaneSAT (artist’s impression pictured), a partnership led by the Environmental Defense Fund and launching in 2020 or 2021, will measure methane emissions from fifty major oil- and gas-producing regions around the world. Image credit: Environmental Defense Fund.12

Detailed studies of major oil- and gas-producing areas can identify biogenic vs. thermogenic methane sources, monitor smaller sources not included in the EPA inventory, and identify particularly leaky equipment. Location-specific studies have been a major research focus in recent years.14 For example:

The extent of methane leaks from the natural gas system is one of the largest uncertainties regarding the environmental impact of the oil and gas industry. Working towards a comprehensive understanding of methane emissions is a major area of current research, involving a combination of large-scale regional measurements and focused local studies from the ground, air, and space.