Efforts to decrease emissions from the oil and gas industry

Methane is the main component of almost all natural gas, and gas delivered to end-users is purified to 95-98% methane.1 There are three main sources of methane emissions from the oil and gas industry:

There is a strong environmental incentive to reduce emissions of methane: it is a potent greenhouse gas that traps much more heat per molecule than carbon dioxide.3 Methane in natural gas also coexists with a number of other organic compounds that contribute to the formation of ozone, which is harmful to plants and animals, including humans.4 Some efforts to reduce these kinds of emissions are voluntary;5 others are legally required by government regulations. Some regulations are enacted at the federal (national) level by the Environmental Protection Agency (EPA),6 while others are enacted and enforced by individual states.7 The EPA also supports voluntary programs to assist both the energy and agricultural industries in reducing their methane emissions.

Methane-related regulations include the use of “green” (reduced-emission) completions for gas wells, reduction of gas flaring, and leak monitoring and repair. 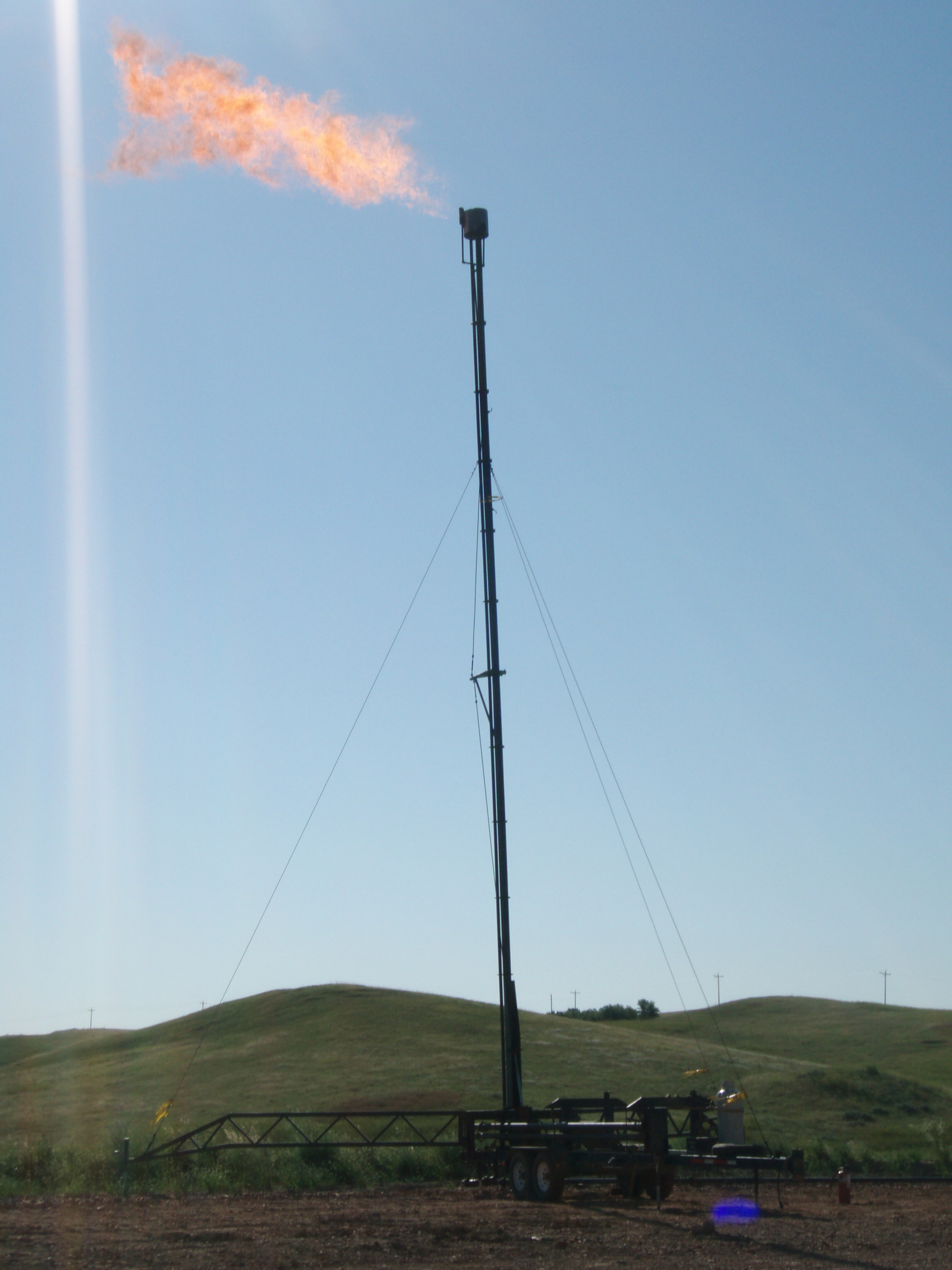 Well “completion” involves all of the processes needed to get a well ready to produce oil and/or gas, including hydraulic fracturing. During these processes, mud and water from drilling and hydraulic fracturing (if used) flow back up the well to the surface along with some water contained in the oil- or gas-bearing rocks. This stream of fluids often brings oil and gas with it, and the gas has historically been allowed to escape into the atmosphere or flared off (see below). “Green” completions use specialized equipment to capture these gases and fluids.8 Captured methane may then be used on-site or sold.

In areas that produce mostly oil with small amounts of gas, operators often start moving the high-value oil to refineries before pipelines can be built to transport the less valuable natural gas. Instead, this gas is simply “flared,” i.e., burned in an open flame. This controlled burning prevents the buildup of flammable methane and converts methane to carbon dioxide – a less potent greenhouse gas. However, flaring wastes usable energy, increases the carbon footprint of the industry, and decreases the royalties that landowners – including private citizens and the government – could earn from the sale of this methane.

Flaring is typically most common in new areas of high oil production, and decreases as pipelines are built to transport the gas. For example, flaring was widely used in the rapidly growing Bakken area of North Dakota in the early-mid 2010s. From early 2014 to early 2016, flaring in North Dakota fell from 36% to 10% of produced gas as production fell (due to lower oil prices) and a local network of pipelines was constructed to collect the gas from individual wells.11

The Bureau of Land Management (BLM) issued a rule in November 2016 that limited flaring on federal lands.13 In late 2017, parts of this rule were temporarily suspended or delayed until January 2019, pending review of the rule by BLM. 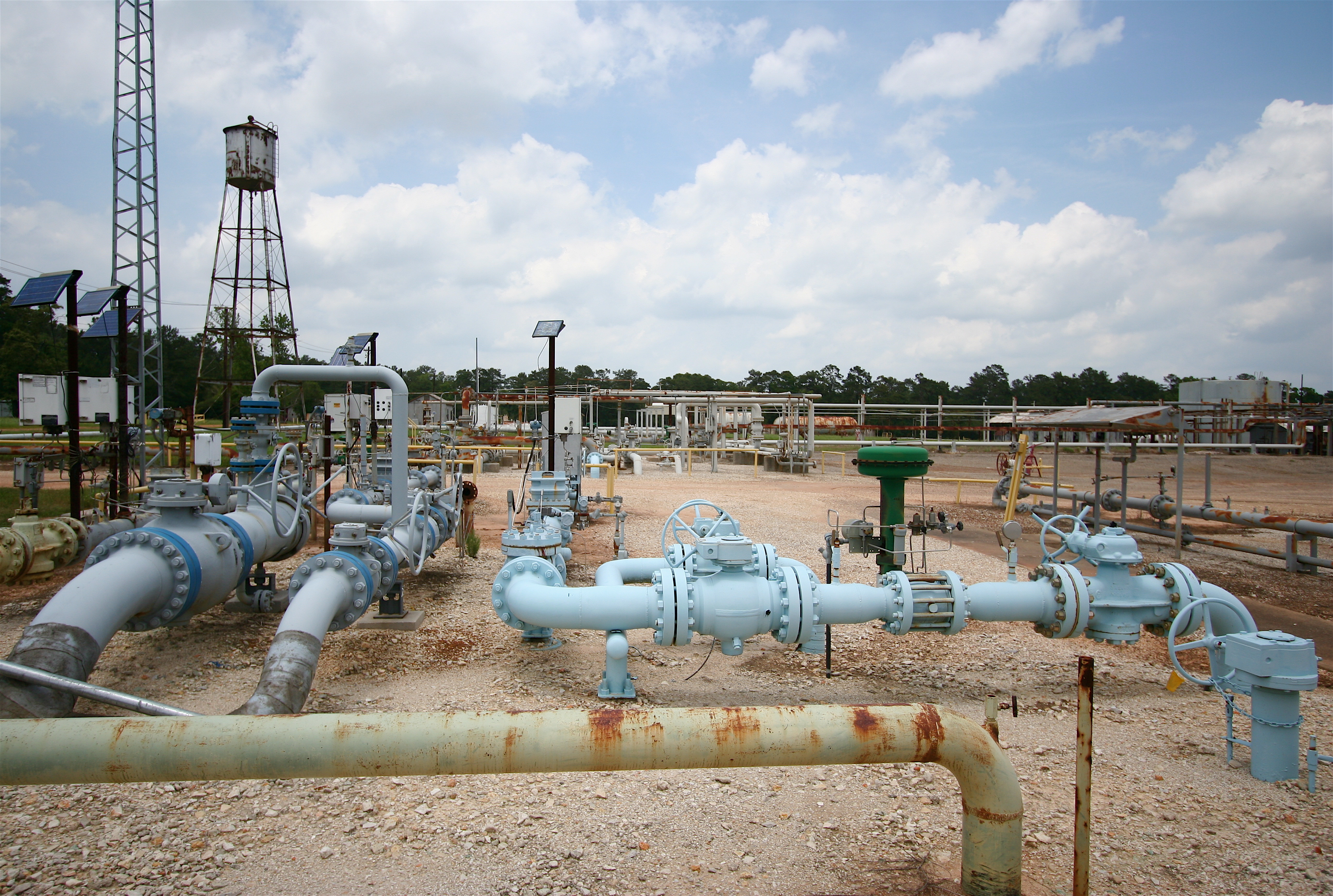 Natural gas infrastructure includes a large number of valves and connectors, such as at this gas processing facility in Montgomery County, Texas. Components such as these may be sources of gas leaks. Image credit: Roy Luck, Flickr.12

In 2016, the EPA issued emissions standards aimed at reducing methane emissions from new sources or facilities by detecting leaks and repairing or replacing leaking equipment at oil and natural gas wells, processing plants, pipelines, gas compressors, and valves and connectors in these systems.14 As of 2018, the Administration, Congress, and the courts are involved in multiple ongoing actions to amend, advance, or delay the regulation.10,15

Some states, such as California16 and Pennsylvania,17 require operators to perform periodic leak detection surveys of oil and gas facilities, followed by mandatory repair or replacement if leaks are found.

The EPA’s voluntary Natural Gas STAR certification program, which includes over 150 partnerships with oil and gas production, transmission, and distribution companies, encourages and documents the use of emissions-reducing technologies.18