Field operations impact nearby small towns and large populations of sage grouse (under special protections6), pygmy rabbits (endangered in some of their range7), and pronghorn.1 The field is also an important winter range for thousands of mule deer.8 Since the field started production in the late 1990s, improvements in drilling, land use, air emissions, and water handling practices have reduced the physical, societal, and environmental impacts of drilling and production in the Pinedale field.

Although Pinedale provides a good example of improvements in low-impact gas production, continued improvements will be important to the long-term preservation of this region throughout the field’s production, eventual closure, and restoration to its pre-drilling state. 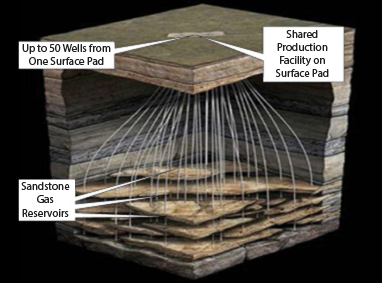 The gas-producing zone of rocks in the Pinedale field is almost 6,000 feet thick and made of many lens-shaped layers of sandstone. Over 2,500 curved wells have been drilled to tap into the producing zone, 8,500-14,000 feet underground, at distances thousands of feet horizontally from the drilling site. These wells are hydraulically fractured to allow gas to flow out of the otherwise impermeable sandstone.

Over 80% of the field area is federal land overseen by the U.S. Bureau of Land Management (BLM), which must approve an operator’s plan of operations and reclamation before drilling. Commercial development of the field was enabled by the use of hydraulic fracturing techniques that were applied starting in the 1990s. Early operations were governed by a 1988 Resource Management Plan/Environmental Impact Statement9,10 developed by BLM with input from the public and other government agencies. The Resource Management Plan/Environmental Impact Statement was updated in 200811 to require or promote environmentally beneficial changes while allowing additional drilling.

Aerial photos of a well site in the Pinedale Field. Left: Well site during drilling in 2009. Right: Same site in 2015 – the site contains 17 wells, its area has been reduced from 15.3 to 6.04 acres, and the reclaimed 9.26 acres are being revegetated. Image credit: Courtesy of Timothy Zebulske, BLM Pinedale Field Office.

Innovations that Reduce the Land Use and Environmental Impact of Operations12