The oil and gas industry consumes and produces water. Water is used to drill and hydraulically fracture (“frack”) wells, refine and process oil and gas, and produce electricity in some natural gas power plants. Water is also naturally present in the rocks that contain oil and gas and is extracted along with the oil and gas as “produced water”, sometimes in large quantities. The quantity and quality of water used, produced, and disposed of or re-used varies enormously depending on local geology, financial constraints, and regulations, with implications for the environmental impacts of oil and gas production.

Many aspects of water use in the oil and gas industry are covered in more detail elsewhere in this series – see the list at the end of this section for more information on each.

Water used in the production of oil and gas is often locally sourced from groundwater, rivers, or lakes (both natural and artificial). Where fresh water is in high demand for other uses, water reuse and alternative water sources (e.g., brackish groundwater) are attractive options.

Water is often transported by trucks, which bring water to the oil or gas well for drilling and hydraulic fracturing, and take used or produced water away for treatment, reuse, and/or disposal. In areas with many established wells, pipelines may be installed to transport water, improving efficiency and safety, and decreasing truck traffic.

Water is used during drilling to lubricate and cool the drill and remove drilling mud and rock debris. For hydraulic fracturing operations, water is mixed with chemicals that improve its ability to create fractures in the rock, and with sand to hold the fractures open and allow oil or gas to flow into the well. Although most wells do not leak, some old or poorly constructed wells may pose a contamination risk to nearby groundwater supplies. 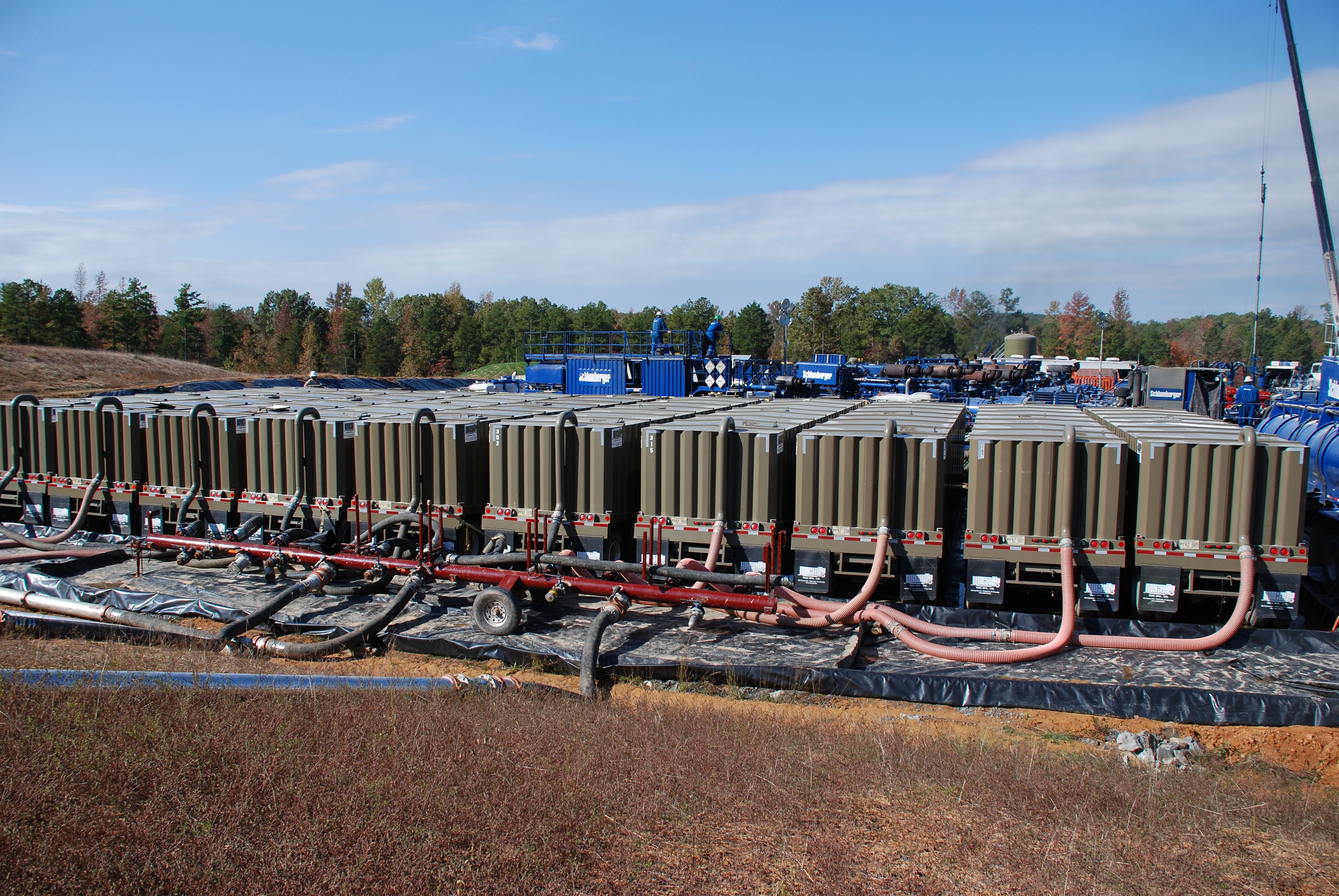 Water produced along with oil and gas is often naturally salty and may contain oil residues, chemicals from hydraulic fracturing and drilling fluids, and natural contaminants from the rocks themselves. It is usually either disposed of deep underground or treated and reused, though some is allowed to partially evaporate in surface pits. The amount of water produced by a well can vary from almost none to over 100 barrels of water per barrel of oil. Nationally, an average of about 10 barrels of water are produced for each barrel of oil.3

Produced water must be either re-used or disposed of. Re-use typically requires some treatment to remove oil residues, salts, and other chemicals, depending on how the water will be reused. In some cases, produced water is temporarily stored in surface pits to evaporate some of the water. This can affect local air quality, and if pits leak, they can contaminate groundwater supplies. In many places, large amounts of produced water are disposed of through deep underground injection wells. This has triggered earthquakes in Oklahoma, Kansas, and some other parts of the country. Access to disposal wells, earthquake prevention, water needs for other wells, produced water volumes, and treatment costs are all important factors when deciding how to dispose of or treat and reuse produced water. 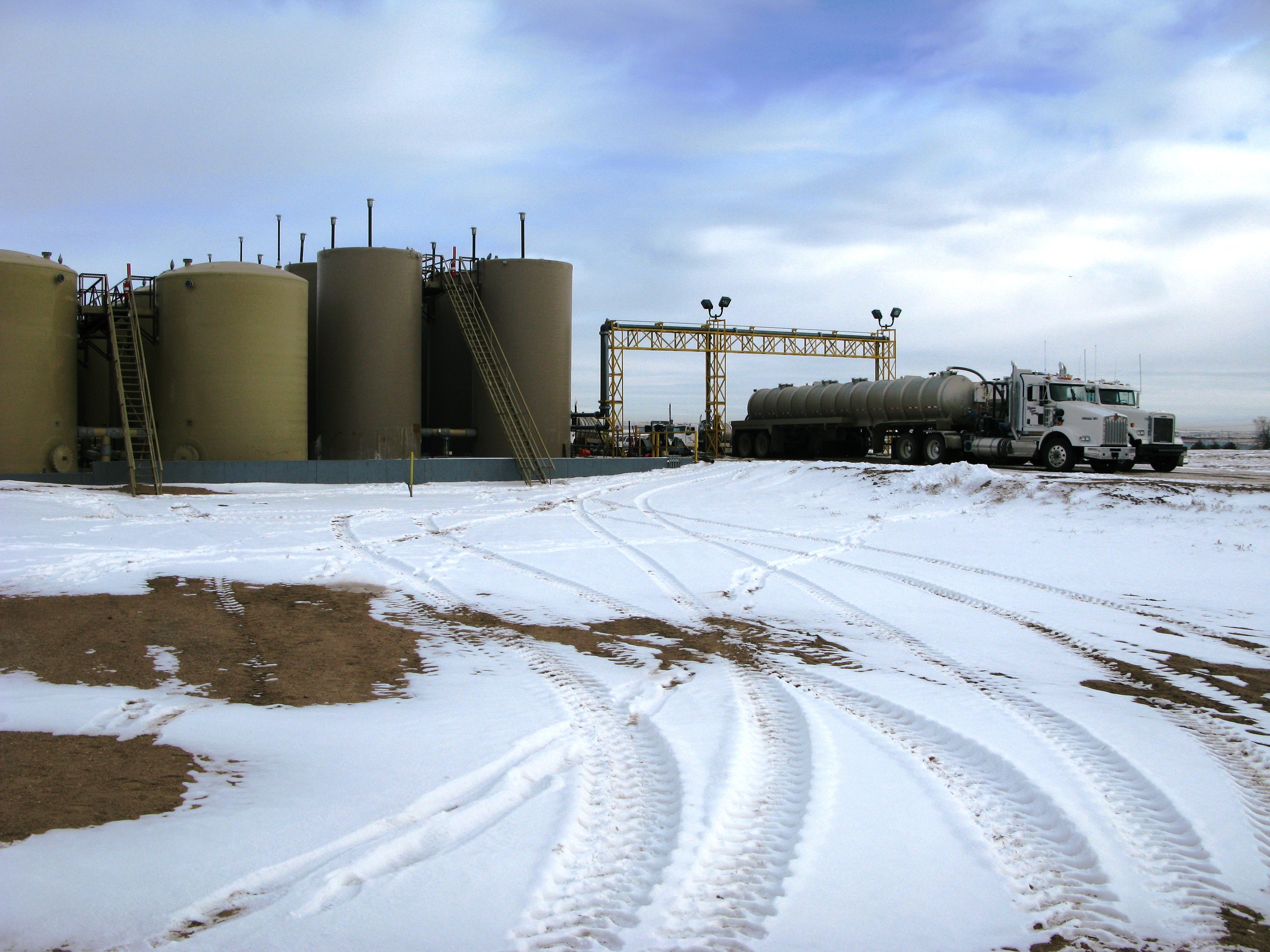 Wastewater is often transported by truck to disposal facilities such as this one near Platteville, Colorado. After some treatment, most wastewater is disposed of deep underground. Image credit: William Ellsworth, U.S. Geological Survey.5

Changes in water use

Although some hydraulic fracturing (“fracking”) has been used since the 1940s, the boom in hydraulic fracturing since 2005 (especially using multiple frack treatments within single wells) has changed how water is used in oil and gas production. Fracked and non-fracked oil wells use similar amounts of water over their lifetime,6 but the timing of water use is different. Water use increases over the life of a non-fracked well – large volumes of water may be injected into older wells to push out additional oil, a process called water flooding. Conversely, water use in many hydraulically fractured wells is very high at first but often decreases over time. Many hydraulically fractured gas wells use more water than non-fracked gas wells,7 although water use varies substantially between different wells in different places.6

In general, individual states regulate oil and gas operations on state and private land while federal agencies oversee operations on federal lands. Underground injection of produced water is regulated by the U.S. Environmental Protection Agency (EPA) or by states to which the EPA has delegated authority. The regulation and ownership of water in the U.S. varies greatly from place to place, but all water withdrawals from public or private water sources require approval from the relevant owner and/or regulatory agency.

Water in the Oil and Gas Industry: elsewhere in this series

In the U.S., 2.5 billion gallons of produced water are extracted along with oil and gas every day,3 most of which is then injected underground, either to enhance oil recovery or simply for disposal.4